I’m not panicking about swine flu. From the cases in Australia so far, it appears to be reasonably easily treated, with minimal effects for those who catch it.

Quarantine? Well I don’t think I’d enjoy it much, but I guess I’d get a bunch of tidying and video-game-playing and DVD-watching done. I’d certainly try out online grocery shopping at last.

Now, I’m not an expert by any means, but it does appear to be spreading rapidly now, and at this rate, may be close to going expontential: 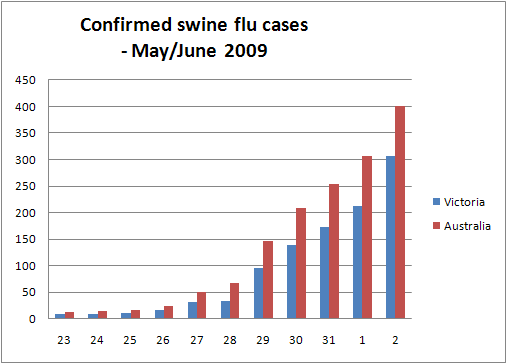 One thing some are suggesting is closing all schools for a week or two. Certainly a lot of the spread so far seems to stem from school contacts. The authorities seem reluctant, citing the disruption it would cause.

But wait a minute. The next school holidays aren’t far away — they start on 29th of June. Why don’t we just move them forward by three weeks? Do it sooner, and nip swine flu distribution in the bud?

School holidays have been moved before. In 2006 they were moved to coincide with the Commonwealth Games. Admittedly if done now there’s much less advance notice, and it might catch some people on the hop.

But I wonder if the payoff — stopping swine flu before it gets entrenched — could be there?

Or is it too late?

10 replies on “Some thoughts on swine flu”

What about all the parents who would have organised their own holidays to coincide? I would like them to do it, to see the flu better contained, but I suspect it’s in the too hard basket.

What bothers me, is that as a mother of 3, we self quarantine whenever we’re exposed to stuff…because it’s just the right thing to do. But time after time sick people trudge of to work or school or kinder spreading their virii. It’s just inconsiderate.

It’s certainly an interesting thought. Our youngest is in year 12 and I’m trying not to think of the consequences of a school closure at this point in time. For the bulk of the school it would be fine and there would be very few problems, but for those in VCE it could be challenging.

It is probably too late. Moving school holidays forward could delay the spread if the infected didn’t go out thus advancing the spread.

I’m not so sure every child would stay at home for two weeks. I spent most school holidays going to movies etc, This may spread the flu to other more vulnerable demographics that are present in these locations. Moving forward the holidays at such short notice would be a major hassle that could* delay the spread.

*Assuming it is limited to the school aged population.

It’s too late really. Year 12 VCE exams are coming within a week, so it’s not really possible to shut down all schools.

I think there would be too small a pay-off for the massive disruption caused. As Stitch Sista points out, this would throw many working parents for a loop and may cause major problems if they are unable to get leave / arrange childcare in what would be a massively overcrowded demand market all of a sudden. As you yourself point out, thus far, it’s a flu – dangerous, unpleasant, but not more so than plenty of virus infections already out there (in fact, it’s more responsived to Tamiflu than the “regular” flu virus is). Do we close all the schools every time a wave of the (*much more dangerous to young children) gastro goes through? We don’t, and there are sound reasons why we don’t.

Of course, parents are free to make their own call on this – and some will, in affected areas.

Also, how bad is this spreading compared to, say, last year’s ‘flu of the season’. nobody is giving this sort of data, so we can’t say that this one is spreading any faster or slower or about the same as any other flu.

I can tell you from personal experience being quarantined is NOT fun.

In the end she was cleared although trying to get an answer from the DHS or the hospital was zero….couldn’t get a straight answer from either.

Hospital told us to ring DHS , DHS tells us to ring the hospital in which the swab was administered.
Fun…..NOT

Sooo in answer to your bringing school hols forward would need more notice and the strain would filter itself out I think.

Thanks for showing the graph. I glanced over the numbers recently and had a similar bad feeling but was too lazy to visualise them.
It’s already almost 400 cases now here in VIC (www.healthemergency.gov.au). That really looks like getting exponential.

My family had the plain old common cold this long weekend (and either side). I looked at the Coles online shopping because I didn’t want to go out into the great unwashed, but it’s not as simple as I thought. You have to select a delivery time and they only have a certain number of slots available. If they’re sold out, diddums. It ended up that if I ordered on Friday they wouldn’t be able to deliver until sometime Wednesday. Might be just because it’s new in Perth, but it did put me off bothering in the future.

My sister and I do online shopping all the time through Woolworths and it’s great. If they run out, they do actually replace it, if you choose for them to substitute things. Also, delivery is always prompt and…I’ve never had the trouble of having to delay getting the groceries for half a week because they don’t have spots.