I’ve been using Glenhuntly Station for about fifteen years, since when I first moved to the suburb.

I still go there even though I live in Bentleigh, on days when I’ve dropped off the kids at school.

In that time, about the only thing that’s changed is that there used to be a booking office and a lady selling tickets. She could whip through a queue in seconds flat when there was a train approaching.

She was replaced by the Metcard machines in the late-90s, and for a while there were no staff there at all, although at one stage there was a shortlived coffee stand.

Then a few years ago the station hosts arrived; two staff for just a few hours each morning peak-hour. Station hosts were allocated to the busiest stations that didn’t already have staff, which included Glenhuntly.

But the most visible difference over the years is the logos used on the trains and on the timetables, which have gone through four completely different names and designs over the past decade… from The Met, to Bayside Trains, to M>Train, then to Connex.

And what about the thing that really matters: the number of trains?

How has that changed?

That’s right — despite record patronage growth across Melbourne’s train network of about 70% in the last decade, there is in fact one less service now than there used to be. That’s because it got turned into an express that no longer stops there. Apart from that all they’ve done is fiddle the timings a bit. 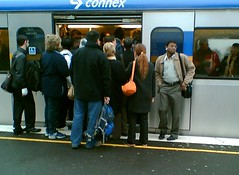 That’s progress for train passengers at Glenhuntly. Four different names on the trains, and one less service in the morning peak — even though it’s one of the busiest suburban stations.

Admittedly, other lines have got extra trains, and many of them have worse crowding, so it’s well-deserved. But more trains are needed right around the network.

Later this year we can apparently expect another new name for the trains. One that stays for good.

But who knows how long it’ll take to get more services running.

11 replies on “How much has really changed?”

Here’s a thought to ponder: Is it Glenhuntly or Glen Huntly? Connex says the former, Aus Post says the latter…

Yep, spin, spin and more spin to cover the fact they’re busy doing nothing with our $.

Goodness me. That’s a shocker. Spend heaps of money changing logos & binning & reprinting thousands of dollars worth of stationery, but don’t actually improve the services. Wow.

Funny you mention this because a friend who lives in Oakleigh and catches the train from either Oakleigh or Huntingdale is looking at properties on the Frankston line. Last night he was looking at timetables and concluded GH, McKinnon and maybe Ormond had such a poor train service, he was reluctant to move near them. As you say, so many expresses and so few stopping trains. Fifteen minute gaps in AM peak is unacceptable.

I’d go as far as saying the Frankston line has a better off-peak than peak hour service.

Off-peak trains come at even 15 minute intervals and are full of empty seats, unlike the peak services which have 16-18 minute gaps (at most) and are sardine tins.

Although I think you are greatly exaggerating to call Glenhuntly “one of the busiest stations outside of the CBD”, however. It’s in an awkward spot though – the loadings build up as far as Caulfield, where people get out and are replaced by others. So it’s probably the most crowded spot on the line.

Not all of the Frankston Line is suffering; there are 10 trains arriving FSS 0800-0859, serving Carrum through Mordialloc.

Liz: The suburb name got the space in it when they realised that the road and the suburb were named after a ship. The railways haven’t changed their name for it though.

Coralie: To be fair, they probably needed to re-print the timetables anyway when they ran out. But the cost of re-painting the trains each time would have been huge.

Somebody: Certainly some stations have a better off-peak than peak. As David says, further out things are a bit healthier, though yes, the crowding’s much worse.

What I meant by busiest was in peak hour. The Hosts were targetted at the busiest non-staffed stations in 2004, so by definition, it’s one of the busier, at least at peak hour.

What’s doubly annoying is that some of the expresses towards the end of the morning peak go through very lightly loaded. And of course they all crawl through there due to the tram crossing, so they could stop with barely any time difference.

David: the definition of morning peak is (or at least was) trains arriving at the CBD cordon stations (that is Richmond, Jolimont, North Melbourne) between 07:31 and 09:00.

What about before the summer timetable that became permanent in I think January 1993? I suspect 1992 would have been better than 1997!

I didn’t look back that far, as I didn’t live there then, but you might well be right.

To answer the last question, it’s just under 2 months!

Yep. If I’m calculating it right from the released details so far, there’ll be an extra train at 8:09am (direct to FSS), closing the gap between the 8:05 and the 8:21.