Just when I thought my finances were more-or-less under control, March brought a couple of major unexpected things breaking down.

Electric car windows are nice to have. But one stopped working a couple of weeks ago. This involved using sticky tape just to keep it from descending by itself and staying open to the weather. Cost to get it fixed? About $500. Turns out those car warranties provided by used-car dealers are pretty specific… if it’s a fault in the engine or otherwise making the car go, that’s fine, but windows? Nup. Ka-ching!

Then the fridge stopped last Thursday. The ice-cream melted. I tried the things suggested in the manual, in particular vacuumming around the back to clear the dust out. There was heaps of dust. So much dust it made clunking noises as it flew up the vacuum-cleaner tube.

It didn’t help. The repairman came on Tuesday to tell me it was the compressor. And it would cost five or six hundred dollars to fix. Sigh. (And there was a $95 charge just for the privilege of being told that.)

The points for getting it fixed: less cost than a new one; less waste of the rest of the fridge.

The points against: it’s already almost twelve years old; no guarantees something else wouldn’t break. And the clincher: he couldn’t do it that day anyway, and he wasn’t even sure if they had the parts in stock.

And I wanted a solution quickly, because using an esky with purchased ice in it works okay for a small amount of stuff, but is not my idea of fun.

So I decided to buy a new fridge. Turns out Choice in November had a survey of fridges, and my mum had the mag handy. Most of those at the top of their results are Fisher and Paykel. The repairman liked Westinghouse or Kelvinator (apparently both made by Electrolux). So I had a quick look online at prices and compared models. 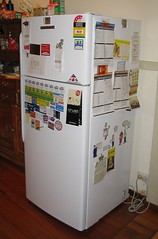 Some things I learned about or otherwise considered:

I spotted a good price on a Westinghouse in The Good Guys catalogue, and went looking, aiming to buy that day. Unfortunately I couldn’t find their Brighton store temporary (due to a fire or something) address, in no small part because their web site map claimed they were near JB Hifi.

I did find Retravision instead, who had a nice F+P model at the right size, also on sale. Checked if they could deliver it quickly, and they said yes.

Sold. Plus delivery fee, and extended warranty, about $1300. Ka-ching.

No wonder I think I’m broke. (I suppose I could have looked for something on eBay, but like I said, I wanted this problem fixed fast, and hopefully it goes for at least another twelve years before I have any problems.) I’m not really broke of course, but months like this, with major expenses, mean the things that I had on the plan for the house go temporarily out the window. It’s enough to want a session in the scream chamber.

I actually thought the washing machine would be the next to stop. It’s about 15 years old and has started making a more noise during the spin cycle than it used to.

Oh, I didn’t check where the fridge was made before I bought it. All other things being equal, obviously nice to buy Australian made and support local jobs. Turns out it was made at Fisher and Paykel’s factory in Cleveland, Qld… which was due to close last month.

9 replies on “The car and the fridge”

The important things. You quickly redecorated the fridge.

Yes, Good Guys has temporarily moved – to the building right next door that used to be a Mercedes dealership… I thought it was fairly obvious!

My mum just went through the same thing. She also rang her home insurance which has told her that if she can get a letter from the power supplier (Jemena, formerly Alinta) admitting to a power surge around the time of the breakdown, then they will cover the cost of repair, which will help nicely with covering the cost of the new fridge. Hers broke during the hot days in late Feb where there were power outages so we are hoping that there was a power surge in there too. Mind you her old fridge was almost 30 years old so most likely died of old age but can’t hurt to try!

It’s good to replace the fridge as models even 10 years old can use more power than a new one. It is also good to regularly vacuum the condenser coils so heat can be shed easily. If the coils become covered with too much dust the compressor has to work harder and more power is used. On some fridges the coils are on the back and on others they are under the fridge along with a small fan that needs to be cleaned too. In the USA I had 3 cats and their hair would accumulate on these coils. My new Mitsubishi fridge here in Australia that I bought at Retravision actually has the condenser coils under the outside skin of the fridge so there is nothing to keep clean.

In the USA the fridge almost always comes with a rental home or apartment and is left behind when one moves. This is also the case when puchaceing a home or apartment too. Most Americans moving to Australia are surprised to find out that they will most likely have to buy a frige for their new home in addition to all of the other moving expenses.

Are you going to peel of the enegry use sticker??

Andrew, yeah Jeremy decorated it, and decided on an orderly look for most of the fridge magnets.

Liz, it’s not obvious if the map points you a kilometre further north up the road!

Jed, haven’t decided if the energy sticker will stay or not! I suspect the new fridge is more efficient since it’s newer and smaller, but haven’t actually found figures for the old one. (I forgot to measure it when I checked the power consumption of all my other gadgets).

How weird, my fridge broke on Sunday too. So down to Retravision for a new one, got delivered Monday. We lost a lot of food though by the time we realised, all the meat had defrosted, plus two brand new tubs of ice cream not to mention all the milk etc.

Sorry, I assumed you drove past the and couldn’t find it – I can see how the map led you astray!

Will keep you informed to see if my mum gets her insurance payout! (not sure, but you might be able to claim for perished food even if the breakdown isn’t payable?)

Jen, yeah most of my food had spoiled by the time I realised. Wasted ice cream is nothing less than a tragedy!

Liz, actually I would have driven past it, but I didn’t look, as I was expecting it to be further north.

Yeah will be interested to hear if she gets it. Apparently the extended warranty I shelled out for includes covering perished food.

Our ducted heater stopped in spring 2008, utterly responseless. Why fix then, let’s wait until Autumn….
The repair man cometh in Autumn and:
1. Our former Vulcan ducted heater (install price 1997: $3000) was of course the biggest load of carp ever foisted on the Victorian public, yada yada.
2. The Vulcan electronics are ugly, the boards had the fritz; cost $600 plus the reason it’s had the fritz is because the innards elsewhere are fried. Could all be fixed, $1200.
3. We should have had it regularly serviced, the air intake has no dust screen so the dust probably collected inside the machine. Our original installer assured us there was nothing to service.(but we discover they don’t do ANY service, they only install)

This cost us $165 to find out. Some ducted heater people want to charge upwards of $200 just to appear.

We now have had a new Braemer machine installed, at 4.7stars its the bees knees, it seems. Using the original ducts which is something. $2300 hard earned money later, the house is a balmy 19C.

The insurance thing … ? Something to do with a “fusion clause” in your contents policy isn’t it? I’ve heard rumours to that effect but thankfully have never (not yet, anyway) had to test it out.