Having had a week when a car window motor broke down (cha-ching, $520 thanks) and my fridge went on the fritz (TBA), it was good to let it all go with a concert on Sunday night. (See earlier blog post)

It’s probably easier to just dump the Twitter posts, with a few extra notes here and there.

18:05. Riding bumblebee tram to Grand Prix. Hopefully will have missed most of car race, but have ear plugs ready if not.

The cars were bloody noisy. And fast. I can’t see the appeal, to be honest.

It took a while to find the concert site. Not helped by the complicated pedestrian pathways, and the maps, which don’t show the bridges over the track.

19:02. Finally found premium concert entry. Would it kill them to have more signs? Dallas Crane on now.

Around this point Tony SMSd to say keep the Twitter updates coming, which I’m afraid just encouraged me.

19:31. A few poms in the crowd reminiscing about their last Who concerts during interval.

Anyway, Anyhow, Anywhere — Love the instrumental bit of this. 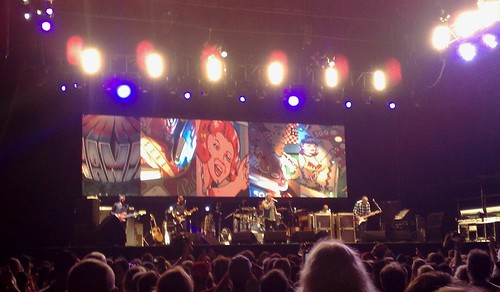 20:00. Pete joking about their ages. Should buy the new album. Oh yeah, who are you?

— It was something along the lines of claiming their first albums had been released when they were 12, and the latest when they were 92. They also took the mickey out of the Grand Prix, which was pretty funny.

— Their gunzel song. Accompanied by sped up vision of old railways. Honestly. 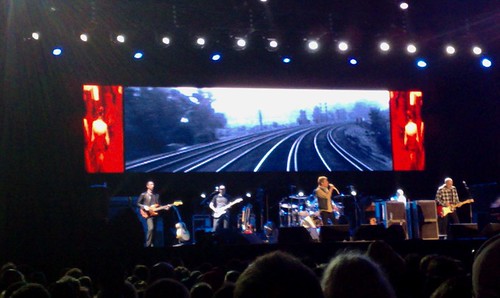 — Earlier I played this on CD in the car. My kids were remarkably tolerant. It may well be my favouritest song ever.

21:21. OMG. They just played the whole overture from Tommy. That was fantastic.

— Wait. Was it actually Underture? Or a mix of the two? I need to dig it out again. And also a bunch of other semi-obscure Tommy songs. I don’t know if all of the crowd appreciated it, but I certainly did.

The second song of the new album. A bit of a whimper of a finish to be honest, and the thing with Roger holding a cup of tea didn’t really work IMHO.

Great concert though. They can still play. Zak Starkey does, I think, play drums better than his dad. (No, I didn’t Twitter every song…)

Eleventy billion people stomped off out of Albert Park to the tram stops. I ended up on a tram to Malvern to catch a train home. It’s just a shame most of the PT effort goes into the CBD to the track, whereas people going in other directions get little in the way of extra services. Probably encourages people to drive into the CBD, which is crazy of course. Still got home before too long.

>> The cars were bloody noisy. And fast. I can’t see the appeal, to be honest.

Funny how we can all have such drastically different tastes isn’t it – I feel the above for footy, cricket, and F1, never understood the fascination with it, yet love the V8s.

That’s okay, I can’t understand the fascination with any sport. I get really bored when people try to talk footy with me (or any other sport, for that matter).

And, yes, I understand, few people I talk to about F1 care. It’s a rare person, honestly, that I can discuss it with intelligently. Agreed, loud, agreed fast, but the fun for me is seeing who can overcome the challenge the best.

The concert sounded amazingly good. I’m glad you took the time to go all out and really enjoy it. It’s times like that that we need I think, to feel truly happy, in times when the shi* is hitting the fan. Like a light well of hope.