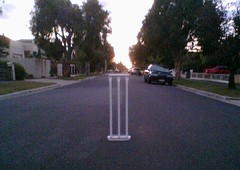 It turns out there are actual documented rules for street cricket, which is popular on the sub-continent.

But at my place we’ve got our own version, which has evolved into a limited overs format that suits a short game after dinner for the three of us, though of course occasionally neighbours will join in.

6 balls per over. If there’s only three of us playing, this means the wicketkeeper and bowler swap after each over. The “pitch” is between the middle of our driveway and the middle of our neighbour’s driveway.

To make it fun and ensure everyone gets a good go at batting, each batsman gets at least two overs when they can’t go out. During these overs the batsman also can’t get run out; if this happens then the run doesn’t count.

On or after the 12th ball, the batsman can go out.

Overs for each batsman are limited according to the length allowed for the game. Four overs in total, with three players is about a half-hour game.

If the ball is knocked into a temporarily or permanently inaccessible spot (eg down a drain, into a hedge) then the batsman may earn a maximum of three runs, but he has to run them. (This whole game is to get all of us to have more exercise, so it’s not an automatic score.)

I think that was all the rules. We don’t do LBW or wides or no-balls, at least not yet.

The result from last Thursday night’s game: Jeremy 10 runs, Daniel 8 runs, Isaac 6 runs. I think we were all bowled out; I don’t remember.

Sounds complicated. But then again I’m not a cricket fan. I used to enjoy it when summers meant lying on the couch for a couple of months watching the cricket but those days are long gone