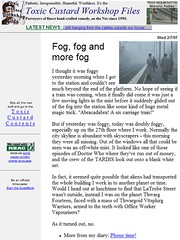 I always used the term depreciated, but according to Wikipedia it’s deprecated. It’s not trying to say it’s lost it’s value; it’s trying to say you’re discouraged from using it.

In computer terms it generally means something that has been replaced by something better/newer, but it’s still kept around for backwards compatibility.

I officially launched toxiccustard.com on 2nd December 1996. It followed on from the Toxic Custard email list that was started back at uni in 1990, about four web sites hosted in various places by some kind mailing list readers who offered space on their servers. Actually from time to time I still encounter people who read the Toxic Custard list back in the 90s, and have found themselves scarred by the experience.

I’m not even sure at exactly what point “blog”-type posts were appearing on the web site — I think it would have been late-1996, but certainly archive.org has one from July 1997. Back then nobody called them blogs of course. (My diary posts from 1994 to 1996 were dug out from the email list archives.)

Over the years a bunch of other stuff got posted onto the site. Highlights included all the Shakespeare spoofs, the video destruction, the Doctor Who spoof and my History of the World.

But my blog has taken over most of my online content creation time, and in March 2005 I moved the blog over to danielbowen.com. I’ve tried to find the time to keep updating toxiccustard.com, but other things have occupied me.

I’m arguably less attached to some of the content there too… as I get older, some of it seems increasingly… well, immature.

So as of now, toxiccustard.com is deprecated. I’m going to leave it running, but I’m steadily putting banners up on all the pages to say I’ve stopped updating it. (And Google ads, so hopefully it can pay for its own hosting.)

Totally irrelevant but I am curious as to how the solar hot water is performing now that you have had it while? Maybe worth a post.

I’m one of those sad individuals that used to read toxic custard back at uni in 1991… from memory, I discovered it on one of the aus.culture newsgroups. Used to print them up and read on the train on the way home from RMIT. Oh, the memories…

Sorry for the pedantry (hey, I’m a librarian), but deprecate and depreciate are two completely different words.

deprecate: express disapproval of or a wish against (a plan, proceeding, purpose, etc.)

depreciate: diminish in value (the car has depreciated)

I think you’ve depreciated your earlier postings – but I think you probably underestimate their value.

It’s all important, in my view; a nice snapshot of a growing phenomenon. Cherish it.

Vlado, there’s still a few of you around. I recently discovered a guy at work used to read it 15+ years ago.

Frank, fair point. But yes, I’m keeping it all.

Hate to say it but Wikipedia is edited by general people and they actually discourage students using it at high school in getting there info, as it can be simply wrong or inaccurate, more the latter.

Totally surprised that you use it at all Daniel or even refer back to it.

Sure, even I’ve contributed to Wikipedia on occasions. But studies have shown overall it’s no less accurate than paid reference works. As I’ve blogged before, I guess the bottom line is to have your BS detector running, and always double-check anything important with another source.

I still enjoy the ‘great vomits’ pages – immaturity is timeless! ;)

The most famous use of the word I can think of was in MCC’s reply to the Australian Cricket Board of Control’s 1932 telegram in which the ACBC complained of England’s inmtimidatory bowling at the Australian batsmen (paraphrasing): “We deprecate the cable in which the Board refers to bodyline bowling…”

But it was always worth the train ride out to Caulfield from RMIT to use the 24hr terminal rooms! (were they Olivettis? Telerays? I can’t remember)

can’t remember how I got onto TCWF – I think a friend put me onto it…
then I found it again a few years later and have been on the list ever since….

Yes, became a blog lurker after following you here Daniel from the Toxiccustard mailing list – found in a newsgroup originally (I think it might have aus.culture too, vlado). It’s still worth a look – I contributed a great vomit, myself.