Just a few more thoughts on the fires. 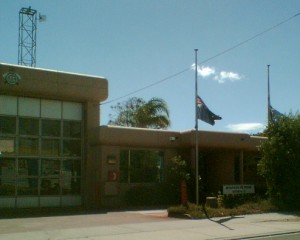 Blood: I was going to wait a little while before donating blood, as I wondered if this might happen: the Blood Bank has been overwhelmed by donors and is asking people to stagger them, as people can only donate every three months, and blood products have a limited lifespan.

Money: Likewise the Red Cross web site has been overloaded, which means people are digging deep. Good. Happy to see they’re taking donations from outside Australia, too. I’m sure there’s a lot of people around the world who are willing to help.

Data: From The Times: Mrs Parkinson and her husband, Colin Buckler, grabbed their two-year-old son Sam, a bag of nappies and a computer hard drive and tried to flee by car. I know I’m not alone in having some of my most precious memories in electronic form on my computers’ hard drives. But one of the reasons I use an online backup service is to avoid any problems should my computers have problems — of any type.

Photos: There are many amazing stories and pictures out of the fires, but the Boston Globe with its Big Picture series has captured some of the best.

Shopping: Coles have announced profits this Friday will go to bushfire relief, somewhat gazumping Safeway/Woolworths, who are doing the same for farmers next Friday.

Such a terrible tragedy. Yes, those pictures are good.

I can’t donate blood for the next 6 months (being about to give birth, and then post-surgery and lactating) and while we have decided on the amount of our cash donation, I’m holding off trying to process it for a couple of days as the Red Cross site is so swamped. What we’ve already done is a bit more prosaic but still needed, I think – bundled up bags of toys, children’s & baby clothes, and toiletries and delivered them to a local collection centre for distribution. Oh, and all the food for this Saturday’s brunch will be brought to you courtesy of my local Coles – tough for Woolies this time, I’m afraid.

Off to man the phones in the city. Doing something at least.

I donated a car full of clothes and food. I wish I could do something more by going to Kinglake and other areas and clearing all the shrub and twigs that fuel the fires. I have never seen anything like this at all in my life, a million times worse than the Mt Dandenong Bushfires of January 1997 that were deliberately lit. What drives these people who light fires deliberately?

Interesting to see overseas coverage. Thanks for the link.
Aside from the heavy impact of all of the other pics… those pics of the melted alloy wheels are quite confronting when you think of the heat that caused that!

I donated money at Coles today. They were taking donations at each cash register. Coles made it very easy and quick and I know my money will get to where it is needed. I was provided with a receipt too. It would have been much more trouble to fight my way into an overloaded website to donate. At times like these evil people often set up fraudulent charities to take advantage of other’s generosity. This happened over and over after hurricane Katrina.

It’s good that people and companies everywhere are responding generously to help those caught in the fires. Can’t help feeling a bit cynical about Coles and Woolworths helping farmers though – the price squeezing on suppliers by these two retailers is part of the reason farmers are doing it tough.