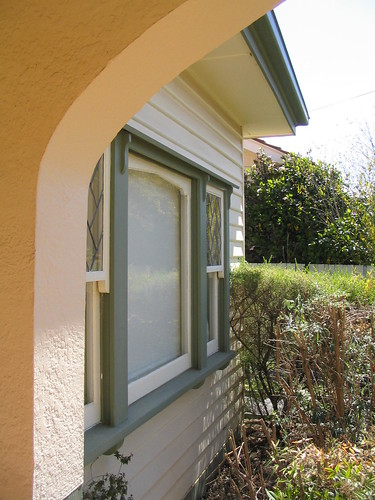 I wouldn’t pretend to know a great deal about house design. But obviously it’s more energy efficient to design a building so that as far as possible, in summer it is kept cool by shade (rather than by air-conditioning) and in winter kept warm by the sun (rather than by heating). Apparently this is called passive solar building design.

A friend of a friend lives in a highrise (built late-1990s, I think) where there’s no shade on the north-facing windows, and the air-conditioning needs to be run even on cool days. I can’t imagine what it was like during last week’s heatwave.

In contrast, my house (circa 1930) has eaves over the windows. I can’t quantify how much it helps keep the house cooler (or at least less hot), but this photo of one of the north-facing windows, taken at 3pm on Friday, shows clearly how the eaves keep the sun away.

Eaves are no longer mandated, and I specifically recall a letter in The Age about a week ago that observed that new buildings no longer require eaves as mandatory and therefore developers don’t install them. It lowers the quality of the building.

It’s one of the greatest planning failures in recent times that passive design is so neglected.

I recently read a report indicating 7-star buildings recover the additional capital required to build them within 3-4 years – surely a worthwhile investment, as most live in a new house for longer than that before selling and moving on. Past the 3-4 year period, all the energy gains are savings to the owner – and importantly, reduce additional demand on the water and power grids, something which can only be a good thing, in light of recent events.

Passive cooling does help keep the air cool inside a house, but you run into trouble with any house when the night air doesn’t get cool enough to be considered comfortable. The air in the house needs to be replaced every day or it starts to go stale, and it starts heating up because of all the people living in it. When the air can’t be replaced by cooler outside air at night, no amount of passive solar design will keep the place cool – it has to take in a house full of 30 degree air from outside.

We’ve run into this problem at our place. The insulation and shading can keep the interior below 29 degrees on a 45 degree day (without hot wind penetrating any cracks), but the air has to be changed over eventually, and with a 30 degree low overnight, that means we need the air conditioner to bring the temperature back down.

But you’re still right – an unshaded, poorly insulated box will get even hotter than my carefully designed house on days like these.

Some of the housing estates to the south east of Melbourne have house after house with no eaves. Absurd.

Once the sun goes off the windows, if it does at all during the day, the apartment will cool to the temperature of the building as a whole. But yep, pretty unpleasant.

One of the “passive” methods for fighting the heat is simple alfoil and some water in this spraying thing.

Just spraying glass areas and sticking large sheets of alfoil on them helps to reflect heaps of infrared radiation away.

Art, do you live in St Kilda East, cos I saw an example of that on an apartment on the weekend. Made me giggle. I also saw some west facing windows completely covered with the silver car windscreen shades on Brigton Rd in Elwood.

My house is a 15 y/o brick box with no eaves. Only saving grace is it’s two-story-ness allows the living area downstairs to remain cool on all but the hottest days and there are no windows on the north side of the building.

However, the east facing windows are hammered by the afternoon sun. To Art and Liz’s points – I use this stuff on the windows from a guy in Cheltenham – http://www.concertinafoilbatts.com/renshadedata.htm – he’s a really great guy been promoting this stuff for a couple of generations.

Basically silver foiled card with tiny holes in it so you can still see out (to some extent) but it reflects 90+% of the sunlight/heat. I attach it directly to the glass (inside) with velcro stickies and leave it there for the hottest part of the summer. Works really well.

I also installed this stuff in the roof (from the same guy) – just lay it on top of existing insulation (or whatever) in the attic to reflect heat from the roof tiles. Works well to reduce heat incoming through ceiling. http://www.concertinafoilbatts.com

Have a look in the outer suburbs and you can see the so called McMansions with no eaves whatsoever and large windows facing north and west which means any effort to cool them is an absolute struggle. I can recall somone informing me that it is to a builders advantage to do this practice as it saved several thousand dollars in material (but ignoring the fact that it cost that much extra to cool it!!!!)

At the other end of the scale of ‘passively cooled structures’ I can recall a set of solid brick lecture theatres at Monash University on a 36° day some years back on a week of hot weather. Whilst it took several days to heat up, unfortunately it took that long to cool down again!

Also on Monash Uni, several of the original buildings, constructed in the early 1960s are connected to a common slab heating system which was religiously operated between May and October so I was told. I did many a physics lab in September – October with mild weather outside and the heating cooking us inside – and were were all just about hanging out the windows as a result!!

In a solid brick house, it seems that you’d need to be able to get air into it at a quicker rate than the bricks will heat it up again. Unless every single bit of window space can open, I’m not sure that you could do this without a fan. Though having a reasonably powerful fan sucking in cool air at night is still no doubt far more energy efficient than any refrigerative system. I’m not sure of any commercially sold systems for doing this, though an evaporative cooling system would do it fairly well and you can turn the water off when it’s no longer hot outside.

My apartment building built in 1961 has 2 layers of brick wall seperated by an air space. This design kept the indoor air in my place remarkably cooler (but more humid during the hot weather. I have never seen this design along with the small indoor and outdoor air vents in the US. The small swamp/evaporative coolers that I found for free with the trash at the curb do not seem to cool the air much even in an open window and with ice in their icetrays. At least they are very cheap to run at less than 85 watts each. I am very glad I did not actually buy them. The larger rooftop swamp coolers at work and in some public places around town do seem to work much better. I was tempted to buy an A/C unit but I think I can do without for now as it is much cooler now.

It should be against the law to build a house without eaves. They are damn ugly!