I was going to post a photo showing the ugly truth of working at home with no aircon when it’s 43.2 degrees outside and nobody else is home. But I think the world can be spared that. 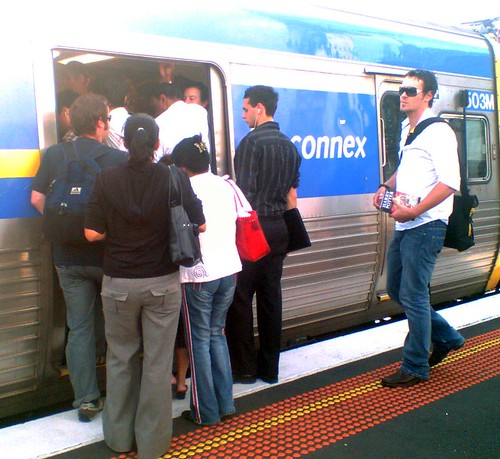 Instead I’ll ponder this: why are the trains so bad this summer?

Were they always this bad and nobody noticed before?

Firstly, note Connex’s explanation, with the main points being: tracks buckling (like happened yesterday), failing airconditioning on the Comeng fleet, power supply problems (which I would guess are made worse by the aircon taking more juice).

Taking that at face value, why is it so bad this summer?

I think there’s a combination of things here:

Not that any of this is excusable, of course. And it’s all fixable, and is the sort of thing that the government should have flagged they’d rectify in the Victorian Transport Plan, but didn’t. $38 billion may be spent, but we’ll still have these problems.

On the 13th there were at least 86 train cancellations. Yesterday, that record was beaten, with at least 115. Many of these were at peak hour, and to put it into perspective: a peak hour train carries about the same number of people as a single freeway lane does in half-an-hour. Cancelling just 8 trains is therefore the equivalent of fully closing the Westgate Bridge (in one direction) for an hour.

So the next time you see Premier Brumby on the TV, saying he understands your frustration at cancelled trains, and how they’ve got a Plan, you’ll know what a crock that is.

PS. 12:45pm. A problem at McKinnon made my trip into the city this morning a little more challenging than usual. The sight of a fire engine blocking the line at the next station is never good news. Reports are conflicting, but apparently a car driven by someone who doesn’t know how to deal with boom gates was involved. Further update to this here.

The excuses trotted out for V/Line track buckling (on the Swan Hill line) a few years back was that it was a different grade of steel used, hence it couldn’t cope with the heat extremes.
So, as none of the track has been changed in recent times, whats the excuse for Connex track buckling all of a sudden?

I was at Flinders Street today and confronted Kosky in front of her media pack.

And yes, that was me who was about to greet you – but I could see you were running late for the concourse conference.

The exact number of cancellations yesterday was 234! So, presuming the Westgate Bridge has 4 lanes, and one peak hour train carries the same amount of one lane freeway traffic in 30 minutes (as in this post), that would be equivalant to closing one side of the Westgate Bridge for 29.25 hours.
Or more simply, 234 (number of cancellations) divided by 8 (number of peak trains closing Westgate for 1 hour is equivalant to) would be 29.25 hours.
Gee, that’s a lot of freeway’s closed.

Feral Beast heard on the radio that the reason tracks are buckling is because they’re not leaving gaps between the tracks (to allow for expansion) but are welding them together….?!
And using a water tank to water down the tracks…in a drought…

Maybe they’re hoping that if they water the tracks then more will grow.

Go Reuben give it to her!

I was at Richmond station yesterday with a mate after travelling out to Knox City and waiting for three consecutive cancelled trains was shocking in the roasting heat. The track on platform 6 was smoking because it was that hot, there was not cigarette butt, it was smoking track.

nup, the new reasons for 8 out of 10 cancellations, according to the head of Connex, is now the unions. Love it!!

Are you sure there was a fire at McKinnon?
http://moorabbin-kingston-leader.whereilive.com.au/news/story/train-chaos-at-mckinnon-station-frankston-line-disrupted/
I was upstream at Ormond and could see the train at the platform and it looked OK. Plus I saw it pass me about 30 mins later as I was driving to Caulfield, so it can’t have been too damaged.

BTW if you think peak hour rush is a problem, on Australia Day, the 5:45PM service at Blackburn was meant to terminate at Parliament via Flinders St.
The next service at Blackburn was 6:05PM, and that’s what I was going to catch, but we arrived late at the station. The time was 6:07PM, and not only had the 6:05PM not shown up, the 5:45PM hadn’t either – and the PID said 5 minutes left.
Eventually, at about 6:08PM, the 5:45PM service pulled in 23 minutes late, and it waited! It waited at least 4 minutes before leaving. And then again, at Box Hill, it stopped and waited for 2+ minutes.
What the hell is wrong with Connex? They’re running late AND on top of that, they get their trains to wait idling.
I reckon by the time we were in the City, the 5:45PM not only had the 5:45PM and 6:05PM service passengers, but also the 6:25PM passengers!!
By the time it arrived at Flinders St, it was running so late, that it just terminated there! Everyone had to get off. I was headed for Southern Cross. So I had to get onto another train. Which wasn’t scheduled for departure for at least another 8 minutes.
If trains keep coming up with this crap, honestly, car usage is going to go sky rocketing, considering Metcard fares are on the rise, even though fuel prices are no longer $1.50/L.

I can see this only getting worse as the hot days progress.

And to think that this mess that we’ve got going could have been preventable. Kosky must go. In fact, the whole government should go if they continue to support Kosky’s incompetence at the helm of one of the most important positions in parliament.

Breaking News from ‘The Age’
198 trains cancelled so far.
And Kosky is finally paying off with free public transport from first service tomorrow until last service on Saturday – including V/Line!
However a Metlink press release says only Friday…

I’m the news clip. But seriously…if Kosky were self-parodying, us commuters wouldn’t know the difference.

To be fair, the first two dot points are things the PTUA asked for, specifically getting more out of the fleet. Previously they were running a pretty slack maintenance schedule.

Lol about Jesse Martin on the twitter update!! And send some of that SE breeze north!