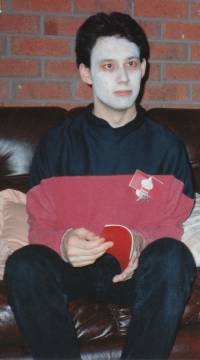 I wouldn’t normally consider myself a Trekkie.

But when it was first on the telly, late at night on Channel 9, I did regularly tape Star Trek: The Next Generation, at least for a while.

And I did once dress up as Data for a Star Trek: How to Host a Mystery night.

But I don’t go to conventions. And I don’t speak Klingon.

When all ST:TNG started getting released on DVD, I was amazed at how Paramount thought they could charge $200 per season for them and get away with it, and wouldn’t touch them with a barge pole.

Then the prices dropped a couple of years ago when they repackaged them all, replacing the solid, cool-but-awkward-to-handle way-too-big plastic boxes with cardboard. They went down to about $65, which perhaps is approaching the realm of reasonableness. I managed to pick up ST:TNG Season 1 in the plastic box version for the lower price. It sat on the shelf for a while, but recently I’ve been watching it with the kids, and we’ve all got a little bit hooked.

This, I think is a good thing. ST:TNG is pretty much all PG-rated, and in many ways it sets good examples. A crew full of humans of various races (and a Klingon). Using teamwork and intelligence to solve problems. A strong sense of morals. And like any good sci-fi does, it has some good special effects, and great stories.

So I decided we’d watch through the lot. It’ll be good to see those that I didn’t catch during the 90s TV run. We’re almost at the end of series 1 now.

The collection at the local video shop is a bit patchy, so I wondered if I could buy it all. Then I realised how much it’s all going to cost. Checked the DVD Plaza Pricecrawler. Yep, about $60 to $65 a pop. Another six seasons at $65 each about $400. It’s good, but Ouch. I had a look on ebay, but they’re a bit scarce over there.

On Friday someone at work was talking about how the UK Pound has dropped against the Aussie dollar. So I decided to look on Amazon UK. To my surprise, they were on special, marked down from UKP 34.99 to UKP 12.98. When you remove the VAT and add the postage, it’s less than $30 per box, so less than half the Australian price.

I don’t know how long the special price lasts, so I went a bit mad and bought all of the ones I don’t already have that were in stock. So on their way from Amazon UK are series 2, 3, 4, 5 and 7. I’m sure I’ll pick up 6 at some stage, but there’s no rush.

Oh well, there goes my DVD budget for most of the rest of the year. I only have myself to blame if I have no money.

Yes.
Yes you are lol.

Relax Daniel. I have been to TWO conventions. One featuring a high on something Jennifer Lien (Kes from Voyager) who was a bitter dissappoint to all who attended, but that’s okay because the next guest was Patrick Stewart who spoke for 90 minutes and was totally incredibly entertaining. And all at the Opera House. Also attended another one in Perth with Ethan Phillips (Neelix) was also very funny and entertaining. But Conventions are a rort, designed to drain as much money out of the attendees as Possible! These days I wouldn’t bother.

Oh and I have all of TNG on DVD in the Plastic Boxes. I also had ALL of Voyager on VHS, and sold it on ebay for about $50 to some girl who couldn’t believe her luck (it probably cost me thousands).

Daniel, are the DVDs from UK region free? Do regions matter any more?

Well, it doesn’t matter to me, but obviously it does to some people.

Amazon UK says they’re region 2, but I know from past experience that they don’t necessarily say when they’re really multiple regions (eg most BBC releases are region 2+4, but from what I’ve seen, Amazon always says just 2.)

Daniel… I bought a Tribble.

I am not a Trekkie either.

I also have all of the TNG plastic box sets- as well as the Original Series, Deep Space 9, Voyager AND Enterprise! Suffice it to say that I spent quite a bit over the years on them! To be fair Daniel, you may not think that they were worth $200, but when you consider that a movie is worth about $20-30, bear in mind that each of those box sets contains an entire season (26 42 minute episodes), in 5 different languages, with about an hour of special features, it’s not all that bad, though I agree it is somewhat excessive! And besides, I’ve always liked the Trek special box sets- they are the best looking box sets, bar none!
Anyway, good on you for watching TNG! Like you, I myself started watching Star Trek in 1995 when it was on late at night- TOS on Channel 7, TNG and DS9 on Channel 9! Always annoyed me that it never had a better time slot- but I got used to it! DS9 was by far treated the worst- on Thursday nights after the news, which had just followed the Footy Show, which needless to say ALWAYS went half an hour longer than advertised, so setting the timer to tape it became an artform- usually set it about 30 minutes after scheduled, then added 30 minutes after that! It got worse afterwards- 9 didn’t show it for a few years, then when they did skipped half a season, and by the time they showed the last episodes, it was about 4-5 years late! I myself started borrowing the episodes on video about 1999, so didn’t have to rely on TV anymore!
Sorry, I’m ranting! Good on you for watching TNG! I myself originally started watching it on TV during the last season, then watched the re-runs afterwards, eventually watching them all from friends and cousins who had the episodes on tape! Then I watched them all over again when I bought them on DVD- as well as all the other series, and I really enjoyed them! You will really enjoy TNG- the first two seasons in my opinion are quite dull, with only a few great episodes. Season 3 is when it really takes off, with improved storylines and production values, and many great episodes! Some to look out for- Best of Both Worlds I & II, Yesterday’s Enterprise, The Drumhead, Redemption I & II, Darmok, Unification I & II, The Inner Light, Tapestry and the final episode, All Good Things! All in all, some of the finest hours of television, in my opinion!
Once you have finished TNG, you might want to go on to DS9, Voyager and Enterprise! All great shows, although I was always big on DS9, found Voyager to drift off for a few seasons, and Enterprise became really interesting in its last season- just before they cancelled it! I don’t know whether or not you’ve already seen them, but you can’t go past the Original Series- all-time classic television! It’s great that you’re watching them with your children- we need a, pardon the pun, next generation to carry on the Star Trek mantle, to bring a positive message for the future!
You’ll have to excuse me for my near thesis, but your post has brought back some great memories for me, when I started watching Trek, and all the great times I’ve had with it! And as to comparisons with yourself and others- yes, I am a Trekkie ( always preferred ‘Trekker’ myself), as all the DVDs, models, fact files, posters and the 40 or so books I have can attest to! Funnily enough, I’ve never been to a convention, always wanted to go, but never got around to one, but like Nathan, I agree that they are a rip-off- about $200 just so you can get an autograph! May go one day! And yes, sadly, I do speak some Klingon- pathetically, I tried to learn it some years ago! I do have some of the books, such as the Klingon Dictionary, and do know some phrases!
Believe me, I will finish this comment, it has gone way over! Just wanted to finish by saying that I hadn’t watched Trek in about a year or so, and found myself last weekend watching TOS episode ‘Space Seed’ and Star Trek II: The Wrath of Khan, in tribute to the passing of Ricardo Montalban, who played Khan Noonien Singh in both features ( as well as Mr Roarke in Fantasy Island ), and didn’t realise how much I missed it, and how great they still are!
So you enjoy Trek again, And I’ll go and enjoy a few other 80s favourites- Quantum Leap, MacGyver, and Magnum PI! Have fun!

Yeah I did watch some DS9 when it was first on the telly. Enjoyed it, too, but Channel 9 made it too hard to keep up with.

Thanks for your thesis :-)

My girlfriend recently bought the box set with all the ST:TNG episodes and we’ve been slowly working our way through them. We’ve only just started on season 2.

When the show first started I remember it looking all new and shiny. Watching the early episodes now, some bits look surprisingly dated. It’s still good fun though. We’ve kinda overstocked on box sets at the moment, so we’re watching a disk of ST:TNG, then a disk of X-Files, House and Seinfeld. We have so many to watch, we rarely watch broadcast tv these days.

The EzyDVD store had the entire 7 season collection in a giant plastic case for about AUD$170 a year or two ago.

I see they have Enterprise and Voyager in similar collections now… hmm :)

Both “Currently Out of Stock” though; and given the state EzyDvd is in, do you reckon they’d be likely to get it in again?

Actually guys, when TNG first aired it was 7:30pm on Wednesdays. Channel 9 also decided in all their wisdom to jumble season 1 and 2 episodes, so that Whoopi Goldberg would be seen – as a 15yo at the time this frustrated me to no end, one minute Wesley is helming the Enterprise and the next Picard won’t even let him step out of the turbo lift door! Of course Australian ratings never favour sci-fi so it quickly got shafted to 11pm on Tuesdays and just to further frustrate us the late news would almost always run late thus pushing TNG even later. Of course that was still better than TNG not even screening countless weeks due to Tennis or any other excuse they could thing of. Times were good when TNG was then on 11pm BOTH Tuesday and Thursdays, though that only lasted a while until DS9 started and took over the Thursday slot.

Anyhoo I must confess that this here Trekker (I’m not a Trekkie) also bought the original $220 a pop official Starfleet boxsets for TNG the second they each came out. Today, yes, that’s phenomenally expensive – but at the time, like Andrew, I saw 24 episodes across 7 discs being a bargain at that price. Given the number of times I’ve watched them over the years, and that they are as prestine as the day I bought them (compared to my barely watchable VHS recordings from 1991 onward), they’ve still proven their value.

Over the years we’ve also gone back over DS9, Voyager, Quantum Leap, (original) Knight Rider, ALF, MacGyver, Stargate: SG1, (original) Battlestar Galactica, Galactica 1980 (although every man on this planet hates that show, it was THE Galactica I grew up with as a kid so it holds a special place), and now X-Files (nearly through season 4). Unlike many movies, it’s quite incredible how well a lot of these shows hold up. I’m thinking of going back over Enterprise later this year.

Ah, I had forgotten about EzyDVD going under.