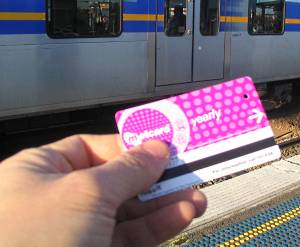 A comment from Anna the other day: A letter in The Age today outlined what happened to an inconvenienced train traveller in Britain recently: after an hour delay, each passenger was personally given a form to claim reimbursement for the trip. The train management apparently have an agreed passenger treatment charter, and they abide by it. The question is – when does Victoria get something like this?

While that would have been a long distance train, rather than a suburban service, it may surprise you to hear that we already have something like it. Well, a little bit like it.

What you probably already know about

Most people know about the compensation scheme for passengers with periodical tickets. If in a calendar month less than 98% of services run, or less than 92% arrive on time (which is actually defined as less than six minutes late), monthly and longer ticketholders can claim a free Daily ticket as compensation. If the figures go less than 95% and 88%, then it’s two Daily tickets. This is a condition of their franchise contract.

True, it’s not much compensation after a month of delays, but it’s better than nothing, and those who claim may gain some satisfaction in knowing that it costs Connex to hand out the tickets, as well as administering the scheme. Obviously, this would be a good month to hold onto your ticket.

Much the same applies to Yarra Trams services, but with different thresholds (95% running, 80% on time).

(It’s worth noting that the fines paid to the government are separate from these thresholds, and kick in as soon as a train starts running late, not after six minutes. However Connex can ask for these fines to be reduced if problems are outside their control.)

What you probably don’t know about

But few people know about the additional “Service commitment” that Connex included as part of its customer charter. It has a number of points, including:

The catch with all this is of course that hardly anybody knows about it. And the company doesn’t go out of its way to publicise it. I need to check this, but I’m pretty sure it’s not a requirement of the franchise contract, but Connex threw it into their charter, presumably for some good PR when the contracts were setup.

The scope for claims is also pretty narrow, and it’s unknown if anybody has ever claimed on these points, particularly the last one.

Even the well-known compensation payouts probably don’t reach as many people as they should. People throw away their tickets, and may not bother to claim. Of course it’s not true that only monthly and longer ticketholders may have faced continued problems over the month; weekly and 10×2 hour and even daily ticketholders may have endured enough to warrant compensation.

And the killer is if your line is crap for the whole month but the rest of the system is okay, the percentages may still be high enough to rule out compensation. (The old M>Train franchise contract calculated it on a per-line basis.)

Overall, none of this seems as good as the what the UK train companies offer, let alone London Underground, which compensates for any delay over fifteen minutes.

So how could it be improved? Line-by-line compensation would be a good start. Broaden the scheme to include Weeklies and 10×2 hour tickets used during the affected period. Perhaps do what some of the UK operators do and provide a partial or full refund for individual delays. Or provide discounted periodical tickets (with the affected operator paying for the discount) the following month, so any regular user can get the benefit, without having to fill in forms.

Even more importantly, analyse the root causes of delays and ensure that the operators’ fines to the government are re-invested in fixing them. Note that over in Perth, they are investing in more concrete sleepering of track to prevent heat-related delays, but there appears to be no ongoing programme of doing so here.

Now, if only the car companies offered compensation every time a car trip resulted in clogged smoggy roads and traffic jams rather than the emission-less free-flowing high-speed impossible nirvana promoted in their advertisements.

12 replies on “The passenger charter nobody knows about”

Was on the Hurstbridge line yesterday; took almost 20 mins to get from Diamond Creek to Eltham in an old Comeng.
The workman replacing the wooden sleepers with concrete ones at Clifton Hill get a BIG thumbs up for working in that rotten heat and for smiling and waving as the trains went past.
Don’t forget replacement buses on the Hurstbridge and Epping lines!

When Myki is running, the system will know when and where you get on and off. It would be possible to immediately refund part of the fare as a credit on your account if the train you would have caught is late (either at departure or destination) or cancelled. You could even have varying refunds depending on how late the train is and even the time of day (e.g. higher in peak hours or times of low service).

Imagine… a customer benefit for the introduction of Myki. The positive PR spin might even be a hook to get the government interested :-)

I think my train has been cancelled three times this week already; however Connex doesn’t seem to maintain a list of cancelled services (no surprise) so how does one prove a fact like this (or know that the service wasn’t cancelled, but turned up at the time of the next normal service?)

Andrew, they could send Yearly ticketholders (who are registered) the compensation dailies already if they really wanted to. Though admittedly they don’t know which Yearlies sold are used on trains, vs trams or buses.

Dave, let me know what train it is, and which days you suspect it didn’t run, and I may be able to find out.

Hmm, so just clarifying…
They have no way of knowing I only used my ticket on trains, right…?
That would be kinda stupid wouldn’t it… Bus users could claim on train tickets…

Actually they may be able to check. The charter clause about validating within 30 minutes of the repeatedly cancelled train suggests they can.

True…
But take this into account.
Consider the fact I’m a student and I only use buses and say that for example, this month, Connex runs below performance requirements.
I could go to a premium station, show my Monthly, and they would give me a free Daily? They wouldn’t know that I’m a bus commuter – unless they actually properly checked the ticket’s data which I doubt they can do with their equipment.

And another weird thing, if someone validated their Monthly on the 31st this month, and this month was a bad month for Connex and they paid free Dailies, this person would get compensated with a Daily just for 1 day?

The PTUA’s Yearly ticket offer is a joke. The application process is ridiculously convoluted and the website is poorly designed with flawed coding resulting in frustrating user errors (assuming you can even find the submission page). either make it like any online purchase site or remove it. I chose to spend the extra hundred (or whatever) than spend another 15mins going through that farce.

Yes, the ticket only has to be valid for a any day in the month to be eligible.

Ampersand, it’s quite possible to point out your perceived shortcomings of the efforts of a voluntary community group without such caustic vitriol.

RE: “If a line is interrupted for more than two hours and no replacement (bus) services are offered, periodical holders can claim free Dailies.”

I’d like to know what they mean by ‘replacement services’- I once claimed under this scheme, and I guess I was rejected because they had a couple of buses which wouldn’t fit even a third of the passengers, just from our station. Does one or two buses really count as an adequate replacement for a string of cancelled trains????

Ha. Ampersand = PWNED. [/childish] Seriously, what’s so hard about clicking on Membership – Member Offers and then the appropriate link to the form? The form itself is all of three screens. Derr.

And it’s rather nice saving, actually.

“When Myki is running, the system will know when and where you get on and off.”

If you get on between Flinders St and South Yarra and get off somewhere between Caulfield and Dandenong, Myki has no way of knowing whether you were catching a Dandenong, Pakenham or Cranbourne train.

There’s one period weekday mornings when all three supposedly run within 20 minutes of each other, slightly less than 10 minutes apart (Dandenong, then Pakenham, then Cranbourne). The first two are frequently late, the Pakenham often not showing up until a moment before the Cranbourne one does, and occasionally not until after.

“Fine”, Connex will say, “just get whichever train arrives first”, and since the Cranbourne train was on time and ran within 30 mins of you validating on the way into the station, no compensation for you.

Fair enough? Too bad if you needed to make a connecting service coordinated to the Pakenham train — you’ve missed that and may have to wait up to 20 minutes for the next, making you as much as 30 mins late. But the Cranbourne train was on time!