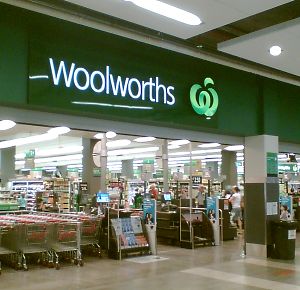 I wrote in December that recycled tissues had disappeared from the supermarket shelves.

I did find an email contact for ABC Tissues (who make the Naturale brand) — they told me to expect their recycled tissues back into Woolworths/Safeway stores soon, in a new packaging.

Last week Flerdle commented that they’d been spotted in Brunswick. I still haven’t seen them in my local though.

But yesterday I happened to explore the new Carnegie Central shopping centre, which has a shiny new Woolworths supermarket. (Yes, the changeover from Safeway has officially started. It’s odd though, having a new store so close to the existing Carnegie Safeway, which is still open.)

And they had the tissues in stock.

Mind you in the mean time I’d made an effort to use hankies more than tissues, to help my depleted stocks last a bit longer. I hope/suspect the energy involved in keeping the hankies clean is less than it takes to produce the recycled tissues.

Still, it’s good to have the tissues available again, as I just can’t see the sense in chopping down trees to put my snot on.

14 replies on “Recycled tissues are back”

As a propaganda gimmick from the end of WW2 to use up surplus medical stock it’s certainly worked well :P
Hygienically it’s better to use tissues but environmentally….

The staff at the old Carnegie Safeway claim they are not going anywhere, but it’s hard to see how they will survive. However, loyal shoppers seem to be sticking with the old Carnegie store. There is also a new Woolworths supermarket at Chadstone shopping centre, as well as a new Aldi, plus the existing Coles. Not far away at Oakleigh Central there is a Coles and a Safeway. Competition is keen between the supermarkets in this area due to the over-supply. Lots of short-dated food being marked down. Gotta love it.

The world has been saved once again…

About 9 years ago I used to work for the state’s recycling authority and the industry / expert view at that time, supported by actual facts and whatnot, was that paper recycling was (marginally) worth it environmentally, with the benefits outweighing the energy / processing costs by a relatively slender margin. Metal recycling was the best value in terms of environmental savings (and cost effectiveness) – it was very clearly a way better option than starting afresh. Glass was borderline, and plastics, I have to say, was actually in the negative overall both environmentally and in terms of costs. (Some plastics, such as LDPE, were particularly bad. PET was the best, but still not positive overall).

Of course, I expect the technology has moved on in the past almost-decade and hopefully the environmental and cost efficiencies have improved.

Peter, virtually every supermarket seems to sell recycled dunny paper; unlike the tissues it seems to be pretty easy to find. Good to hear Aldi have jumped on that bandwagon.

That’s interesting about Carnegie Safeway. I used it regularly when I lived there.

I lived in Carnegie for around 25 years and can remember Safeway being built,and although it is now looking very tired and tatty it is still far more accessible than the new Woolworth store.If you want to pop in for say a bottle of milk who wants to go to all the trouble of finding a parking spot in Koornang Rd,or go to the underground carpark.

Driving down Dandenong Rd on the weekend, I saw a long queue of cars waiting to turn right into Koornang Rd, I assume to get to the new Woolies complex. But there were far more cars than turning lane and hardly any made it through the lights. It must be attracting a lot more traffic, I wonder if that intersection will be modified to cope with the extra demand?

I think the (eco-)argument in favour recycling paper is more about reducing the use of trees rather than about the energy involved (tho that’s important too). Esp when the trees are our publiclly owned Vic native forest (see the disturbing ‘Forest Wars’ book by Judith Ajani).

So all other things being equal, it’s still good to recycle and buy recycled paper products. And not always to take ‘made in Australia’ as ness a good thing in terms of paper products. Buyer beware!

I didn’t know the new shopping complex in Carnegie was called Carnegie Central. I went there today (to shop at Woolworths) and there it was on a sign as I descended on the escalator to the car-park, ‘Carnegie Central’. How could I have doubted you Daniel?

I have to ask — where is this “Carnegie Central” of which you speak?

Corner of Koornang Rd and Princes Hwy, Les — the old furniture/electrical superstore whose name I can never remember (Betta??), which once upon a time was a Billy Guyatts.

Woolworths UK has gone out of business, after nearly 100 years of trading!

The Credit Crunch is hitting businesses very hard over here. I still can’t believe that Woolies is gone.

I noticed the shopping trollies at Safeway, Camberwell are starting to pick up the Woolworths branding. I suppose they figure that the trollies will last quite a while, so they might as well switch the branding on any new ones they buy sooner rather than later. Kinda sucks to see the Safeway brand dying though. Might just use the chance to shop at the shiny brand new Coles in the Camberwell ‘Well’.