When I was younger I used to focus on a fairly narrow range of music, heavily influenced by what my peers had introduced me to.

One day circa 1988 Raoul brought over a VHS tape of some band he liked called The Who. It was a compilation called Who’s Better Who’s Best. I remember I sat and watched and was particularly awestruck by the final song on the tape: Won’t Get Fooled Again.

At the end, the lasers swirl around, the keyboard goes mad, Moon goes crazy on the drums, Townshend leaps through the air with his guitar ready to play the final notes, and Daltrey lets out a guttural scream of rage before sounding the warning to all of us: “Meet the new boss. Same as the old boss.”

Those of us who are miffed at Rudd’s position on climate change would do well to remember that. 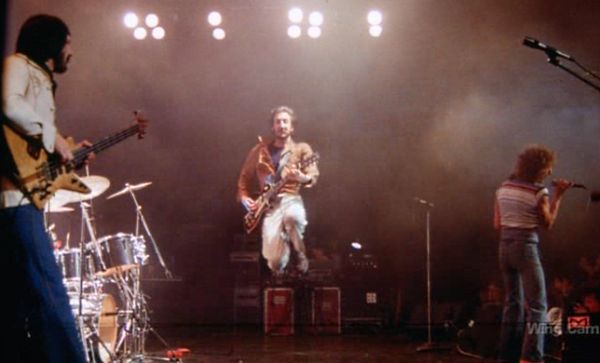 I subsequently bought the CD of the same name, and it went on high rotation. At the time a lot of my meagre income went on CDs, and I started buying up their albums as I found them. At the time, many weren’t generally available… I ended up with an imported copies of some.

By about the mid-90s I had just about everything there was to be had, and knew most of the songs off-by-heart. I ended up writing a spoof of The Who’s rock opera Tommy, called Pommy for the then-fledgling Toxic Custard list, based on the pretend heavy metal band Megabogue, an idea of Raoul’s from years before.

I look around at the poverty-stricken nation
Take a walk to the Army of Salvation
Smile and grin at the free food all around
Pick up my guitar and play
Just like Brian May
Then I get on my knees and pray..
We don’t get soup again!

At uni, some of my friends had similarly one-track minds when it came to music: Brian S was (and still is) a rabid Church fan; Peter B was known for loving Queen. The other one in our tight-knit group, Stuart H, to his credit, seemed to have a much wider musical taste, as I recall it.

My tastes eventually got wider too, and while my CD collection has pretty much stopped growing these days, the music in it is much more diverse. But while some older CDs have been cleared out, all of those Who discs are still in it — towards the end of the A-Z sorted shelves, you’ll find an awful lot of Ws.

Given they’re a band that peaked in the early-70s, and two of the original quartet have passed on, one could certainly argue that they’re past it. Over the years I played the discs less and less.

Out of the terrorist attacks, came the Concert for New York City. I caught some of it on late-night TV. The Who performed four songs to an emotional crowd of NYC police and fire-fighters and their families. It got me all enthused again. Okay, so they were past their peak, but still rocking.

To my surprise, those songs are still ingrained in my brain. Who Are You, Baba O’Riley, Behind Blue Eyes, and Won’t Get Fooled Again.

They did play here in 2004, but I didn’t feel inclined to go. It was after bassist John Entwistle had died, and as Raoul commented at the time, “Who’s left?”

But I still love the music.

In March this year however they’re playing the Grand Prix. And this time around, I thought bugger it, I’m going.

$99 for general admission, with Grand Prix admission included. Not that I’m that interested in car racing.

Then I saw premium tickets were available, at slightly exorbitant prices. And I thought bugger it, if I’m going, and realistically this may be the only time I’ll ever see them live, I’m going to do it properly.

So I splurged. $175 for a guaranteed spot near the front. A Christmas treat to myself.

It’s certainly the most expensive single concert ticket I’ve ever bought. I’m looking forward to it. I expect to go hoarse singing along.

I saw them in 2004 in Melbourne; you should have gone because they were terrific. Age doesn’t seem to have wearied them too much, Pete still leaps about. They still close the show with ‘Won’t Be Fooled Again’ too!

Out of interest, do you intend to watch the car race?

Enjoy the show! Their music is classic. I have also noted thay you are a good speller too Daniel. You know the difference between horse, and hoarse!

The payoff of a youthful passion – a passionate revisit at ‘middle age’! Enjoy!

Brilliant Daniel! When you get a chance to see icons live, you just have to do it – it’s rules! BTW, don’t know if you’re into CSI programs, but “Who Are You” is the theme for “CSI”, “Baba O’Riley” is “CSI: New York” and “Won’t Be Fooled Again” is “CSI: Miami” – you’re obviously not the only one struck by those songs … Have fun!!!

Well done Daniel! We all have to indulge ourselves once in a while. It’ll be one of those “I was THERE” moments years later. I went to a Rob Thomas concert and got great 2nd row seats (fan club member). At one point he asked “how are you doing?” And I yelled out *blushes* We love you Rob! So he asked who said that? I waved and he said “These Ottawa women are so forward”. Oh man I will remember that instant for a long time. I’ve always loved the Who, and for me it’s RUSH, as well. Got most of their Vinyl, and most of their CD’s. And yeah, not played often, but enjoyed. Have fun at the GP!

I’m making it a day of music grand prix day.
I don’t care too much for for the vroom vrooms, so I’m heading to the Sidetracked area to listen to DJ’s and bands before the race, then The Who to finish off the day.
Should be rather large.

Who’s Next is my number one all-time album. And my first listen to Meaty, Beaty Big and Bouncy was pretty epiphonous (gee I hope that’s a word!) too.

Does it shit you hearing their music as the soundtrack for those shit CSI TV shows? Or is it just good to hear it?