One day in 1992, I had a joyous moment when I walked most of the length of Swanston Street — in the former traffic lanes — for the first time.

It was a wondrous thing, and while Swanston Street still sees delivery vehicles, taxis and the odd errant car, with the wider footpaths and cyclists galore, it’s a much more pleasant place to be than it was back then.

About the only one who doesn’t see it that way is new Lord Mayor Robert Doyle. He is firm on saying he wants to return traffic to Swanston Street. I guess he means something like this, filmed in 1988:

Doesn’t look all that great to me.

Of course to put cars back in, you’d either have to remove half the footpaths (and their trees) or mix up all the cars, trams and cyclists, resulting in a dangerous congested mess. And how you’d achieve tram platform stops (required by 2020 or so to comply with the Disability Discrimination Act) I don’t know.

Doyle appears to subscribe to the Neil Mitchell view, that people should be able to drive through the CBD at 60 km/h and park wherever they like. That might have been true… oh, about 160 years ago, but probably not since then, and it’s certainly not true now, not with over 700,000 daily users. 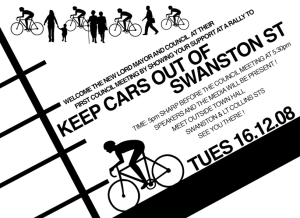 So really, Doyle’s plan to re-open Swanston Street to cars is flawed.

It might make sense if car drivers were a majority of city visitors, and they were lacking road space on other streets, but they aren’t.

It might make sense if the car ban applied at night and was keeping people out of the street, threatening safety, but it doesn’t.

It might make sense if there was space to properly segregate trams, cyclists, service vehicles, general traffic and pedestrians, but there isn’t.

It might make sense if we were wanting to encourage more motor vehicle traffic into the CBD, but we aren’t.

Swanston Street has its problems, but bringing back cars won’t solve them. On the contrary, it would clog up the street, sacrifice dozens of trees, delay thousands using trams, and make it less safe for cyclists, pedestrians and tram passengers alike.

If you feel strongly about the issue, join the protest at 5pm on Tuesday outside the Town Hall (timed to co-incide with the first meeting of the new council).

Doyle is a dope.

His inability to see the logic behind keeping Swanston Street car free is only overshadowed by by his pertinacity and arrogance. The guy is a threat.

The spookiest thing about that video is the brief shot of Flinders Street Station and the Arts Centre Spire… and the massive empty gap behind/next to it. Not a skyscraper in site. How Melbourne has changed in 20 years.

Sorry I have not commented for a while, bloody bigpond internet being down!

Why would you want to reopen Swanston St to traffic I never know. It is far too narrow and it is very dangerous as people have recently died as a result of huge cars and buses. I don’t think the other council members would back Doyle on this issue, so Doyle’s intentions may not go ahead due to lack of council votes.

I’d like to see more stops like in Bourke St/Elizabeth St on Swanston; raised near the intersections. This would stop delivery vehicles etc traversing the entire length of Swanston unless they absolutely had to. (road ramps up/down at every stop; I think there’s a test one like this in the burbs somewhere?)

All those old trams, moving with the doors wide open. Ever single one of them…

I noticed the doors on the trams were open too. I also noticed that the trams are using the long poles instead of a pantograph to contact the overhead power wire. When did the change to the pantographs take place? There seems to be plenty of traffic on Swanston St. already. Being relatively new to Melbourne I never realized that the general public was not allowed to drive on this street. My first thought when I heard of opening Swanstn St. to traffic was that there is already traffic on this street and it was not a pedestrian walkway. Thanks for clearing this up. Letting cars on this street will only lead to a traffc jam in my opinion.

Pantographs replaced the trolley poles on the Z class trams during the 1990’s and more recently on the remaining W class trams (these look odd with pantographs fitted in my view). Interesting to see the different variations of W class trams running through at the time.

The problem with Swanston Street is not about lack of traffic, rather more about what is there – the dirty appearance complemented by two-dollar shops and several rundown eateries (particularly around Collins and Bourke Streets) along the length of the walk – a problem that was there before and after the ‘Swanston Walk’ experiment – in that sence Doyle and the Melbourne City Council are largely missing the point with this current discussion. As I recall at the time they were thinking of a ‘twin mall’ in Elizabeth Street – can anyone clarify this?

Whilst on the matter, many seem to get carried away with the idea of a purely pedestrian mall by getting rid of trams, delivery vehicles, bicycles, etc – which would lead to a very quiet and seedy part of Melbourne (particularly at night) and would make the retail mix problem worse, not better. It is several city blocks and does not have the concentration of major stores that Bourke Street does and should not be treated as such.

Swanston St. was always a flawed experiment from the outset,because it was impossible to ban all traffic and turn it into a true mall.All it accomplished was to turn it into a dead zone,which stopped the larger retailers from operating there.Now all we have is discount shops,fastfood outlets and the types of business that are attracted by lower rents.As a major road through the CBD this should a vibrant business and shopping centre,with shoppers coming from Flinders Street and happy to look in quality stores along the whole strip.I probably am in the minority but have to agree in this instance that Doyle may have it right.

Some of those trams did not have doors but blinds that got put down on the right-hand side and up on the left-hand side at the terminus.

Some of you don’t appear to be old enough to remember that the business mix in Swanston St was exactly the same pre car ban as it is post car ban. Same cheap eateries, cheap frock shops, cheap tourist crap shops. I fail to see how bringing cars back will change that. The presence or absence of cars does not create a “vibrant business and shopping centre”.

Keith, what makes you think that vibrancy and traffic congestion are so intrinsically linked? I haven’t noticed the ‘vibrant businesses’ along Hoddle Street, nor Lonsdale (compared to, say, Degraves Street).

Seventies planning dogma is what you’re on about.

I love the old cars!

Reuben,lets at least compare “apples with apples”.I can recall back in the 50s when Swanston St was always jam packed,so what happened overtime?It seems that various Councils over the years has used this area for every crackpot idea they could come up with.Just look at the various City Squares they have tried,each one promising to be the best ever!It is no good to bemoan the the fact that the street hasnt changed since banning some traffic,doesnt that prove the concept never worked?As for Seventies planning,maybe,but atleast history points the way to the future!

Secondly, the city squares are relatively irrelevant. What is relevant is the accessibility and efficiency of bicycles, trams and pedestrians. In such densely populated streets, cars (the most spatially-inefficient contraptions) just slow things down.

It doesn’t prove anything other than your lack of thought on this topic. Also, projecting the history in the future in the way you so described is akin to giving lobotomies to Schizophrenia patients now; it’s outdated, unsubstantiated and debunked.

A little off topic, but seing this video just makes me think how crazy it was to change the design of our trams from yellow and green. They were distinctive- an icon, and could so easily be reverted to their former glory.

Reubon Re lobotomies.you have just proved the fallacy of your own statement.

I did not know the super-stops were to do with compliance issues. I thought they were just an excuse to put less stops in and closing other stops to try and save money. It’s a moot point unless they have low-floor trams to go with them.

They will be good parents with prams, people with suitcases and old ducks with their shopping trolleys also.

Criminy! The Macca’s isn’t even there in that footage and it has been open forever! I seem to remember their once to be a Maccas and Timezone on almost every block.