In the late 80s, the then PTUA committee got together a group respected community leaders, including prominent figures from both sides of politics, to be patrons of the organisation. 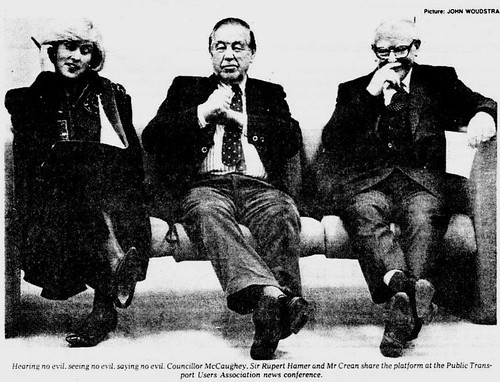 One of them, Frank Crean, father of Simon, and former Treasurer in Whitlam’s government, passed away yesterday, aged 92.

2 replies on “Patrons of public transport”

Winsome McCaughey, a blast from the past. Crean used public transport until very late in his life, like a tram to Prahran Market from his home not less than eighteen months ago. I suppose he had an entitlement to a car and driver…maybe not.

Did Sir Rupert Hamer wear glasses?
Is this a take on the three wise monkeys?