No Country for Old Men — great stuff from the Coens. Gripping. Quite violent though; bits of it almost gave me nightmares. Is it trying to make a point at the end? Ummm… probably. 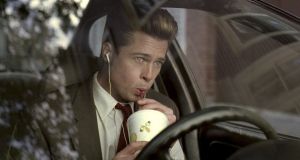 Burn After Reading — more Coen brothers. Some very funny characters, and genuine surprises along the way. Amusingly noticed a scene where George Clooney was running in the exact spot Josh Lyman from The West Wing had a running scene. Quite a few laugh-out-loud moments.

Hyperdrive — Some good gags, such as resetting the entire ship to default settings (rendering the phasers inoperable until you’ve accepted the End User Licence Agreement), but just doesn’t quite fall into the unmissable brilliant comedic masterpiece that the reviews on the cover imply.

Star Trek Generations — Kirk meets Picard… a kind of Star Trek Time Crash. I saw this in the cinema in 1995, and watched it again a few weeks ago on DVD with the kids. Good stuff, though not as impressive as on the big screen. Data’s exclamation (courtesy of his new emotion chip) as the Enterprise heads crashing towards the planet is particularly funny; I remember many in the cinema laughing out loud over that.

(Mind you, according to the Star Trek Curse theory, Generations was a dud. Hmm, I’ve never seen the next one, First Contact, but it sounds like a cracker.)

The Hollowmen — Just brilliant, and as an outsider, I suspect frighteningly accurate.

Dad’s Army — I loved this show as a kid, so grabbed it recently from the local public library. But it’s aged terribly, and not just because the premise is from almost 70 years ago. It raised a few laughs, but just doesn’t seem as funny as it was thirty years ago. I know it’s considered a classic, but I won’t be seeking out more to watch any time soon.

4 replies on “No country for old captains”

You haven’t seen First Contact? What kind of “geek” are you? :D

Several memorable phrases in that one, a couple spring to mind, but I’ll give you one… “Definitely not Swedish”.

People have been telling me to see The Hollowmen constantly; I’d better see or…well…I don’t really want to think of the alternatives.

Only reason Generations (Star Trek VII) is not the worst Star Trek movie in history is because of The Final Frontier (Star Trek V). Forgetting about the incredibly lame and faulty story, the sheer fact that they intentionally and needlessly destroyed the almighty Galaxy class Enterprise p#ssed me off – hell Geordi should have been shot for not changing their shield modulation when the Klingon’s blasted through, it had become standard practise in the television series after the Borg had worked out how to blast through their shields, not to mention when the warp core was overloading from all that unnecessary damage from such a p#ssy Bird Of Prey they could have simply ejected the damn thing. At least we got to see the almighty 1701D one last time in gorgeous CGI in the Star Trek: Enterprise season 4 finale.

Anyways First Contact (Star Trek VIII) is THE best TNG feature, you HAVE to see that!!! Shame it’s not out on Blu-ray yet though :(

Actually, I’d like to challenge Chris about The Final Frontier being the worst Trek movie- did you forget about Nemesis!? At least in TFF they were trying to find God- I don’t know what they were trying to find in Nemesis!Think about it- the villain of the piece is supposed to be a clone of Picard! And furthermore, Data having another prototype- I thought Lore was the only Soong-type android before Data! That movie really left a bad taste in my mouth! Hopefully, and by the looks of it, the next movie, number 11, looks like it might make up for it, and more! Generations was a pretty good film- too bad the game wasn’t! Daniel, do yourself a favour and watch First Contact- definitely among the best Trek movies!