It’s easy to see why motorcycles are offered free kerb parking around the CBD. They take up less space on the road, and (with typically one rider, not much difference to the 1.22 average people per car) burn less fuel and generate less emissions than cars (though more per person than public transport, cycling or walking).

In fact, according to the MCC web site on the topic, Melbourne is the only capital city in Australia where motorbikes can be parked on the footpath (with three specific exceptions where it is banned).

And most motorcyclists park thoughtfully, minimising disruption to other footpath users.

If the CBD keeps getting busier… with more and more pedestrians (and motorbike riders), is it practical to continue taking up footpath space with them?

It’s already apparent that during busy times such as the lunch hour, pedestrians (which per square metre are the most space-efficient way of travelling short distances) are competing for footpath space with motorbikes in some places. 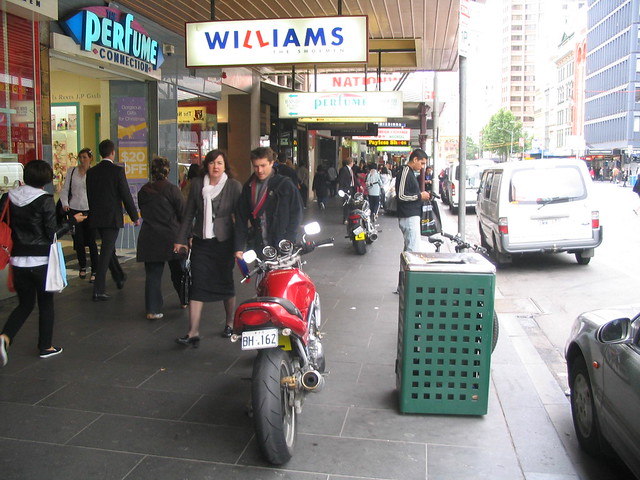 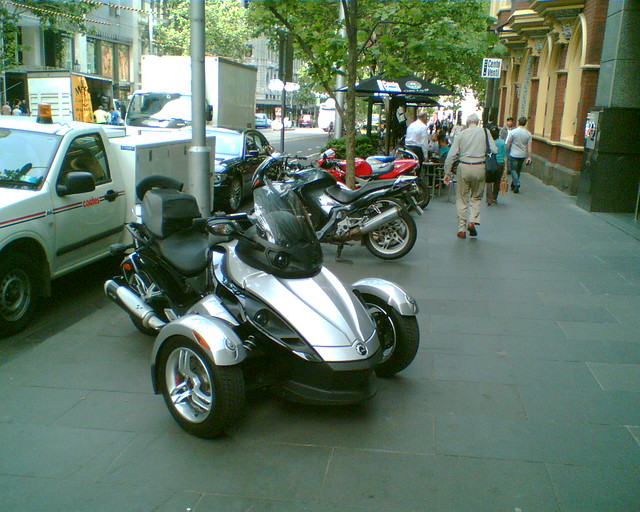 In one case I spotted a three-wheel motortrike thing that was as big as a Smart car, parked on the footpath in Collins Street.

I wonder if at some point, as CBD pedestrian numbers continue to grow, the guidelines will be tightened, with some of the busier areas reserved for pedestrians only, and eventually motorbike parking allowed only in specific areas? More car spaces could be given over to the motorbikes if this happens.

18 replies on “Parking on the pavement”

I’m reminded of Tokyo where one sees lots of m/bikes parked on the footpath. But also of other (usually ‘developing’) cities in Asia where there are so many m/bs on the path that it’s next to impossible to walk.

Regarding the 3 wheel thingy in your pic – which would obviously lead to unsustainable footpath parking if they grew significantly in numbers – maybe there should be a clarification of the rules that one may only park two wheel transport on the path.

On efficiency of m’bs over cars – I’d tend to agree, but I do recall m/bs when I was a rider (25 years ago) which actually used more fuel than small (European!) cars – simply because their engines are generally highly tuned (operating at 6,000+ rpm) with fuel economy not being a priority. I guess that may have applied to the over 650cc category and maybe things have changed since. Plus, also, Aussie cars are in a different league to Europe I suppose.

Those extra wide footpaths were created for pedestrians, not motorbikes and I’d hope a proper parking space was created for them sometime shortly in the future as I’ve almost crashed into a few myself with my bad vision.

The first one, next to the bin, would most likely be illegaly parked. And I question the validty of the trike on the footpath. Being a rider, and ex-city worker, I was always aware of how I parked the bike. The rule is you can’t obstruct the path (which the first one is) need to leave 1 meter of space, and something else which I can’t remember.

Basically common sense and consideration for those using the foot paths. And as usual in life, most people stick to that concept, but the few stuff it up for the rest. Which usually ends in the ‘ban-it’ brigade raising their voices….again….

That first picture is obviously taking some liberty with it’s parking. Perhaps they were only there for a brief moment?

After 5 years of working in the CBD I can honestly say I’m sick to death of the city. This time of year just makes it worse, not to mention the fact that walking through Myer is now complete hell due to the renovations, and David Jones is half demolished and therefore unuseable as a thoroughfare. Myer just makes it worse due to trying to cram as many fragrance salespeople in that walkway as possible. Personally I’ve take for going for a walk by the river at lunch time just to get away from the maddening crowd.

Way back when I got my motorcycle licence, but then promptly moved interstate and sold the bike I bought to learn on, and have never bought another. I honestly doubt I’ll ever get another one, they still cost just as much to register and even more to insure than a car, with the added bonus that with more and more idiots on the roads make it so unsafe for riders. My sister works for the TAC and after hearing some stories she has told me I don’t think I’d ever touch a (motor)bike again.

As a motorcyclist and a motoring journo, I often get asked about this topic.

The first bike (next to the bin) is illegally parked- the rules state that you must not overly impede the passage of pedestrians. There are also rules covering how close to the curb you can park as well.

Every few years the Clown Hall gets a new bunch who need policies and they kick off with banning parking on the footpaths. The MRA respond, they back off. This is ususally due to the once-carried-out-threat of motorcyclists parking int eh city spots- one bike per bay st 5am.

All this said, there are some ‘no bike’ parking areas and that’s not unreasonable. I think most of the CBD lanes could have no bike parking. The problem will come when the greedy council put in parking metered bike spots and then charge us the same amount. Trust me, they would do that in a flash.

Sydney could learn from Melbourne- they ban bikes from the footpaths and as a result people take cars as the effort to find a park is the same.

I see Motorcycles and scooters as a logical and enviro friendly alternative to public trasnsport. My wife’s scooter goes 200k’s on 5 ltrs. Pretty handy.

Yeah Stu, if you click through to the big version of the first picture you’ll clearly see another bike a few metres back which has been left virtually in the middle of the footpath. And both have got L plates. I think these people need to learn where they should be parking.

Nathan, I’ve been past that spot before and seen at least one bike (maybe the same ones, maybe not) parked like that. It’s not just one (click above for zoom), and it’s not just for a moment. And even if it was, that’s no excuse. (I should emphasise again that most bike riders I’ve seen park considerately.)

As for walking around the CBD, particularly at Christmas time, I try and avoid peak times, and stick to the alleyways.

Yeah Tom, be interesting to see what the incoming council try!

This is one of my many pet-hates.

I used to ride a motor bike and I never parked on the footpath (note FOOTpath). There is no need for it, it destroys the street scape and is a nuicance and hazard to pedestrians (FOOT traffic).

The sooner the city council grows some balls and outlaws it the better. They have tried twice but caved in under threat from the MRA (?) to blockade the streets and/or occupy car parking spaces. I say let them and if they don’t pay the parking fees, fine them.

And while I’m at it, it may be legal to park on the footpath, but I’d wager it’s illegal to ride on the footpath and how did those bikes get onto the footpath? I bet they weren’t walked there.

Since I had a bike ripped off from the CBD, I dont part on footpaths there much anymore but when i do, I am always considerate of peds plus the fact that cars may pull up to the curb and need to open their doors etc. It aint rocket science.
What I’m not happy with is last month I paid $593.80 to register my little Daewoo car which gets driven twice a week and $532.80 to register my motorbike, which I dont even ride much during winter anymore. One of them takes up a heap more space and does a heap more damage to roads etc but the rego’s almost equal.

Other States and Territories allow rego for bikes of less than 12 months for us ‘getting old, fair weather riders’ and dont tack on Bracks’ $50 ‘safety levy’, which so far has produced one wanky tv advert and possibly that big ‘rider with gashed leg’ billboard on the side of the Eastern Fwy.

Oh hey – just realised I paid the rego but never put the new stickers on the car and bike – and it wasnt last month – it was September – oops! What a community service you provide, Daniel.

Also, that 3 wheeled thing…. is pushing it a bit claiming to be a motorbike, but if councils offered free parking to vehicles that could fit in half a car space, then the market would call for more options. Ever been to Amsterdam?? http://farm1.static.flickr.com/177/418494341_e87a113e8f.jpg

They look so vulnerable; easy to steal.

>> competing for footpath space with motorbikes in some places

I don’t know Daniel, your sample photographs show plenty of open space and as many/few motorbikes as there are pedestrians ;)

Seriously though, that’s quite cool what you guys are doing over there – what a great way to encourage people to ride bikes. But if people are going to be morons like parking in the middle like your first shot, or parking that mother of a trike in your second shot, there should be an EXTREMELY HEAVY fine for abusing it – perhaps even a mandatory one week stay at a mental institute.

In the first picture is that an L plate behind the number plate on the bike nearest the camera?

Chris, neither of these pics were taken during really busy times of day.

Tom, both the bikes in the first pic have L plates. Click on the pic to zoom.

The second L plate is easy to sea. I mentioned the first one because it is not very visible ands cannot be meeting the requirements to display an L plate if a learner.

Oh how easy it would be for an angry pedestrian to kick them over. Clearly the bike riders that parked that way in the first photo haven’t thought this through. But then… L plates… first bikes…

Ok, that three-wheeler and the idiodic bike parking should have resulted in fines. That’s just dumb. Street parking should be kept legal though, and I agree there are some spots that should be bike-free. Most bikers DO do the right thing, however. It’s just a handful of turds that ruin it for the rest of “us” (yeah, even though I don’t ride I am one of the biking fraternity now so I’m definitely in the “us” category).

As someone very involved in these issues, I can tell you that information from the council is that the number of complaints about motorycle parking are very very few. (And mainly about scooter riders)

If you want to know what the guidelines are (and they are guidelines – not laws) go to http://tinyurl.com/footpathparking

Bicycle racks take up as much (if not more) footpath space when they have bicycles chained to them. At the last count however there were over 1200 motorcycles parked in the CBD (excluding obvious couriers and the Elizabeth St precinct).

And Nathan,
the TAC hates motorcycles with a passion. Because they are an insurance company and we do have more claims than car drivers. If bicycles were covered they’d tell you all the nasty stories about them too.

However, it should be obvious that bicycles chained up in the street are much more space-efficient than motorbikes, as they are physically much smaller.