A NEW report has told us what motorists already know – the southern end of EastLink is a traffic disaster.
…

Toll company ConnectEast is suffering a $227,000 a day shortfall in EastLink tolls it expected to rake in.

Trading in the company’s shares remains halted ahead of a company announcement expected today.

Massive traffic queues stretching up to 2.5km long were found along the Frankston Freeway. The queues have grown by 500m in the past year, the report says.

The Moorooduc Highway-Cranbourne Rd intersection is the culprit.
…

But actual traffic at the intersection has only grown by 2 per cent, or 1000 vehicles a day, since EastLink opened. 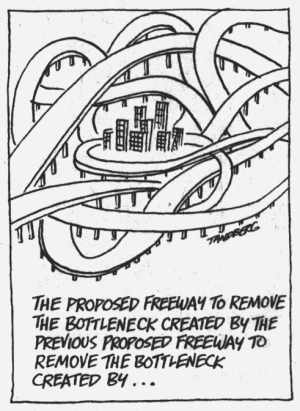 And it goes on to talk about the proposed Frankston bypass.

This is total bollocks.

It’s not like nobody saw this coming. If the Frankston end is choked with traffic despite Eastlink volumes being so much lower than expected, it must have been obvious that it would be a “problem” there. Especially as during peak times (eg long weekends) there have been
queues driving south into Frankston on the freeway for years, long before Eastlink was built.

(I remember start/stop traffic heading down there in 2002 … I slowed down and tried surfing it — eg driving slowly enough that you don’t have to stop. It seemed to work quite well.)

If a mere 2 per cent increase in traffic at the southern end of the Frankston Freeway has resulted in long queues, then it was always going to happen, and those who advocated for the Scoresby/Eastlink to be built knew that right from the start. They got it built knowing it would add to pressure for the next big motorway project.

In fact the Hoddle Street end of the Eastern Freeway is the same. The Eastern was built in the 70s, after it was known that it would finish at Hoddle Street, with no westwards extension ploughing through Fitzroy and Carlton. The predictable snarl at Clifton Hill is precisely what they knew would happen — but is now used to lobby for the multi-billion-dollar east-west tunnel.

Eastlink is just another motorway which has — yet again — failed to fix the traffic as promised, and therefore the roads lobby are arguing to build the next one.

Make no mistake, the Frankston bypass will be a taxpayer funded $700 million (or maybe even double that) bailout of Eastlink.

Eastlink is a private company. Their investors got in knowing the risks. No way should they be bailed out so that traffic can increase (and emissions with it), and they can make a profit.

6 replies on “Eastlink’s snarls are by design”

Bollocks is the best description I’ve heard of Eastlink. Good post Daniel, though I note the cartoon is a little…erm…over-used in such a context.

Of course, most people would assume that the ‘planners'(sic) didn’t see the whole ordeal happening in the future which – in my view – is the only (and worst) excuse for their flagrant plans. The excuse itself is an searing indictment on the government.

If I did not predict in writing about the congestion at the end of the Franskston Freeway, I certainly did verbally with people, and of course you are right, the congestion was already there. While it is not comparing oranges with oranges, wasn’t Citylink pretty quiet when it first opened? I will predict the traffic will grow, as it always does.

It’s all good, the State Govt is going ahead with the Frankston by-pass which will solve all problems and will rip through a fragile flora and fauna reserve because a tunnel will “cost too much”.
Article HERE
They’re truly idiots of the highest order!

Good post Daniel, I saw that article in the Herald Sun yesterday. What strikes me is that road lobbies want to build another toll road from Greensborough to Eastlink, when it has been proven it is not viable, and a road tunnel? VicRoads, RACV, and the Brumby Labor government are a joke like one driver interviewed in the article. Why isn’t there a train line down EastLink? It would serve a far better purpose than roads.

How surprising – and don’t be surprised when the “missing link” in the east (Greensborough to Ringwood) is the next issue that comes up after the Franga Bypass.

Hope the Franga Bypass is cancelled.

The only ‘missing link’ remaining is between the vested interests (with their slave-ish gov supporters) and the environmental & social realities.