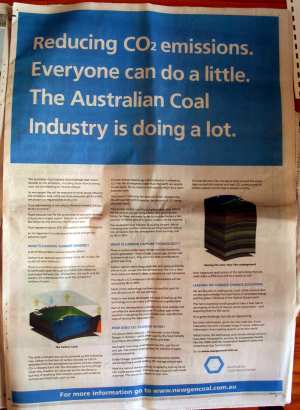 A full-page advert for the coal industry in The Age caught my eye the other day. I just love this bit (quoted here from their web site):

Carbon dioxide in our daily lives

Next time you drink a beer or soft drink, remember that the bubbles came from a natural underground source of carbon dioxide. Geosequestration is the same process, just in reverse.

And they’re trying to claim that clean coal is the answer… Of course clean coal, when it all comes down to it, isn’t actually developed enough yet to be viable — and may never be.

Next thing you know they’ll be making TV adverts like this:

Arrrgh – don’t get me started on the fossil fuel industry and their ‘clean coal’. After reading books like ‘High and Dry’ by Guy Pearse I was couldn’t look at the fossil fuel industries (inc power generation) the same way again. Their ‘greenhouse mafia’ denial/delay-ists along with the Howard Gov left us a decade behind on climate change action, it’s all there in the book.

Now the coal industry is greenwashing itself – here’s the skinny on it . . .

Actually – I’ll take them to task on their headline too. It’s not the Australian Coal Industry doing a lot, it’s the Great Australian Taxpayer funding the majority of the cost (Fed and State grants). Whilst true renewables are left in the shade (as it were!).

The coal industry levies itself 20 cents on the tonne (through ‘Coal21’) to go towards R&D (and marketing!?) on CCS. Coal has been exporting for upto $200/tonne. Garnaut said this was ‘inadequate’ and the CFMU suggests it’s increased to $1.

Victoria even has a ‘Clean Coal Victoria’ http://www.dpi.vic.gov.au/dpi/dpinenergy.nsf/LinkView/EA69F1A4AEF164FBCA25743C00127BD34CAC723B1D538D66CA25740C000D2004/$file/127Million_Victorias_Clean_Coal_Future.doc which advertises jobs to ‘maximise the value of Victoria’s coal resources’ in the ‘environmental’ section. http://www.environmentjobs.co.uk/job.cfm?id=6713

Too funny for words.

What do you mean “next thing they will be making TV adverts like this”? I nearly choked the other night when an advertisement for Chevron Australia came on (until then I didn’t realise we had that company in Australia). I was trying to work out where I had seen it previously. I now realise that of course it was this video the last time you posted it.

I love how casually they assume that everybody would be taken in by it. Whilst society contains many idiots (too many, frankly), I think they do underestimate it here.