Back in the old house in Ames Avenue, the “central bathroom” was down the back of the house, next to the kitchen. The spot where the microwave oven lived was only about 3 metres from the shower. And the microwave we had at the time included a countdown timer. So when water restrictions came in and everyone was encouraged to have four minute showers, we were sorted: the microwave counter would be set to four minutes, the showerer would jump in, and a beep would go off when the time was up.

This winning combination was lost when everything changed.

Since moving (I can’t believe it’s over three years ago now), the kitchen is further from the bathroom. The microwave got upgraded to a model I didn’t choose, which has no countdown timer. We got a kitchen timer, but it’s useless for showering because it doesn’t beep just once when it reaches zero, it keeps beeping. And in fact after about ten seconds, the steady constant beep (which is annoying enough) gets really shrill and urgent (and thus even more annoying).

That’s no good for the shower; you’d (a) kill yourself trying to get to it to press the button to switch it off, and (b) get water into the works, breaking it.

The microwave shares similar beeping attributes. It beeps when it’s finished cooking. Then if you don’t attend to it, it beeps again after about a minute. It keeps doing it.

Both the microwave and the timer thus nark me somewhat. BLOODY MACHINE, I HEARD YOU THE FIRST TIME. I’M BUSY DOING SOMETHING ELSE. JUST SHUT UP, I’LL GET TO YOU IN A MINUTE.

Then I spotted a deal for a free shower timer in the newspaper. Just go to their web site and fill in your details and they’ll send it to you. (It has to be a Victorian address.) 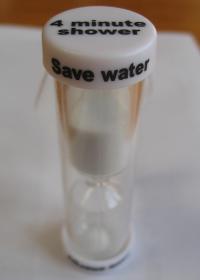 Fantastic! I filled it in.

A few days later it arrived in the post.

It’s an hour glass. Well, a four-minute-glass, to be precise.

Ahh. This is not quite what I had in mind. I’m not saying it won’t work, but I had foolishly assumed it’d be some kind of electronic beeping device. You know, that gives you an audible alarm.

Obviously an hour glass has to be watched. Whether that’ll work for people or not, I don’t know. I guess we’ll give it a try and see what happens.

If it’s no good, I’ll seek out an electronic one. Though I won’t go to the extremes of this device, which actually stops the water.

(For my future reference: These are for $20 — but need to make sure they beep only once!)

How bad is the water situation in Oz these days? I don’t get a lot of news about it on the Polish, UK and US news-sites I normally check. Is Melbourne now facing permanent water shortages that are only going to get worse as the population grows and the climate dries out?

>> Though I won’t go to the extremes of this device, which actually stops the water.

Maybe send an electric current down the water to give you a jolting reminder to get out ;)

>> Is Melbourne now facing permanent water shortages that are only going to get worse as the population grows and the climate dries out?

Nah, Melbourne are fine – they help themselves to whatever they need out of the Murray! It’s SA that’s screwed, jettys along the Murray aren’t even in water anymore and every pond and creek is virtually dry, even the ducks in my area moved out a year ago :( We’re very thirsty here and being at the end of the river means we are at the mercy of everyone who sucks the thing dry… :(

hi daniel, i have one of the ripple ones. you can set any time interval, eg give yourself 5 mins if you need to shave your legs too! they also have a clock. when the time is up it beeps for one minute. but you can press stop at any time to stop it beeping. they suction onto the shower wall.

I’ve got the same one in my shower (Yarra Valley Water branded though). Perfect solution, with no carbon emissions from it’s use of (no) electricity to boot ;)

BTW, you can use it to time teeth brushing as well. Just wait till it gets to halfway and then you’re done!

We’ve got one of those sand timers in the shower and it’s pretty good – as long as eldest Miss remembers to start it at the same time as starting the water!

And the beeping…. I have to agree with you. Why is everything beeping so insistantly now? Happy for the microwave to beep once and then I’ll get it when I’m ready, I don’t need this constant reminder. And now the washing machine has the same recurring beeping. Gah!!!

We have one of the star ones. It suctions to the inside of the shower. Yes, it beeps continuously until stopped.

I moved house 3 months ago. In my shower tub it has a plug and you see exactly how much water you use along with a timer. You don’t actually use much water, its only up to your ankles.

Ahahaha. That’s like sending off for a free calculator and getting an abacus in the post. :p

In our place we’ve got a washing machine that beeps very loudly at something like two minute intervals. The effect is truly annoying. If you put on a load late in the evening you’re about ready to sleep when the thing finishes. A single beep isn’t enough to force you out of bed so you end up almost falling asleep when it beeps again. And this happens again and again! The worst thing is that you don’t actually need to do anything with the damned wash since you can hang it up in the morning so, if it weren’t for the bloody beeping, you could happily fall asleep.
I recon that all appliances need to be web-enabled so you could set up a household site where you could alter their settings, including turning off the beeps after 10 pm. Daniel, you could manage that, couldn’t you?

Why not just get out of the shower when you’re finished? If you stop because the timer tells you to stop, either you’re not rinsed clean yet or you were doing nothing productive in the preceding seconds. Just use the shower as long as you need to, then get out.

An odd suggestion Philip. It should be obvious that shower timers are for those who think they may be able to reduce their time in the shower without sacrificing cleanliness. Why would you bother otherwise?

I used the timer yesterday and today and found I was done in a bit over 3 minutes; it’s not as if I’m going to stay in an extra minute deliberately (especially as I was in a hurry).

I hate beeping things. What about new cars? All they do is beep and dong and chime about everything. The Ford Focus is appalling – it drones when you open the door with the engine running, bongs when you don’t immediately put your seatbelt on and actually has a reversing beeper INSIDE the vehicle which is the most pointless and irritating bastardisation of the purpose of an external reversing beeper.

You think your microwave is annoying? Don’t buy a Focus!

Konrad/Geoff: I’m glad I’m not the only one irritated by this kind of thing. (Similar: Computer windows that grab the focus when there’s nothing to show you.)

Happily my 2000 Astra only beeps when you leave the keys in the ignition when getting out of the car. Which is actually useful :-)

Wish I had’ve known about the free website before getting excited about the one I got at Bunnings for $2.95… Although, ours IS purple.
I was thinking that these would be a good stocking filler for family… Is it cheap of me to just register them and tell them later it was a gift? :o)

I had a shower head in the USA that you could turn to a trickle while you lathered up. The small dribble of water kept the temperature settings at the shower valve the same and the water hot. With this showerhead the water only needed to be all the way on to wet down and rinse off. The dribble was enough to wet a washcloth and liberally soap up and get clean with very little water. In the US. almost every home has a tank type water heater which easily supplies a torrent or a trickle of water without turning off or changing temperature. Here in a country where I would like to conserve water I have a tankless gas water heater which will go out if I run the water too slowly and leave the water cold. I have to run the water faster than I need to keep the heater lit and I get a slug of cold water every time I turn off the faucet/tap for a moment and turn it on again. This is very annoying when I am shaving or washing dishes and the trickle showerhead which I liked would not keep the heater lit either. It is tempting to leave the water running to keep to keep the heater lit and the water hot but this is very wasteful. I do like the fact that this heater is very efficient and it uses no gas unless the water is on but this quirk seems to cause more water to be used than actually needed.

Does anyone else with a tankless heater like this also think that it contributes to water waste?