After checking out of the hotel and temporarily leaving the bags in their care, we headed to the shops to buy a newspaper and one last postcard. Then there was time for a little more flying foxing in the playground (and some filming for a video production the kids had devised) before picking up the bags and walking back down to the station. 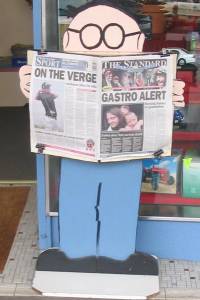 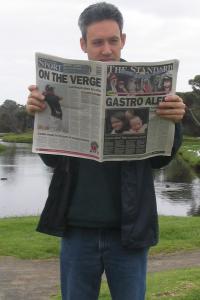 Sending an SMS to somebody I discovered that my phone’s predictive text can’t spell Warrnambool, but can spell Waspman. What use Waspman is in messages, I don’t know.

Back in car B on the 11:45am train back to Melbourne, this time there were no double bookings. Lunch from the on-board snack bar (I’m not sure it’s quite worthy of the term buffet) was quite a decent ham, cheese and salad sandwich for me, and sausage rolls for the kids, as we watched the countryside pass by. I’m quite intrigued by the stone walls around (I think) Camperdown, I assume are same type of dry stone walls found in England, some of which are hundreds of years old. (Intriguing link: Dry Stone Walls Association of Australia.) By the time we got into Geelong, the train was getting pretty full. I noted as we passed through Little River that my phone was reporting the location as “Little Rivr“. I guess if the founding members had been inspired by the name on a mobile phone instead of on a road sign, they’d have been the Little Rivr Band. Sounds very Web 2.0.

The burbs of Melbourne started to appear — as did various groups of gunzels, huddled with their copious cameras by the tracks at various spots along the way from about Laverton onwards. I don’t know what they were waiting for, but it probably wasn’t our train from Warrnambool.

This year we didn’t get to watch the Melbourne Cup en route, but we were back in town as scheduled at 3pm, and home by 4pm, our short but relaxing break over.

As has become tradition, I tracked the costs for the weekend (at least roughly).

So a total of (roughly) $1031. Yikes. Not exactly bargain-basement (it adds up quicker than you’d think, especially with accommodation and attractions, and now the kids are bigger and eat full-sized meals), but all in all cheaper than previous jaunts, due in no small part to not having to buy air fares. More short local(ish) breaks like this would be good, I reckon.

6 replies on “Back to the burbs”

I like country stores; they tend to have this nice, airey atmosphere that no city store can match…

Gunzels scare me; and the ones from Railpage have issued many a death-threat which is amusing. But most of them are harmless (I take it they didn’t throw anything at the train).

If you’re even in a situation where you need the help of a half man, half wasp creature; then you’ll be glad your phones predictive text works.

Only if the wasp-person in question, Brian, is a vicar from 1914 or thereabouts; and we need a “hint of mint” for it to become the ultimate Dr. Who spoof.

I see you made friends with the man who stands outside the newsagent and reads the newspaper. Rude guy never speaks to me…