Does it drive country people batty to have such restricted access to weather forecasts? Maybe it’s just capital city people like me who are used to being able to get an up-to-date weather forecast on-demand (without having to get online): on the TV news bulletins morning, noon and night, by PocketNews SMS.

But these tell you nothing about regional areas. I was only able to find out about the local weather if I managed to catch one of the evening TV bulletins — not exactly easy when you’re on holiday. And not having access to the morning paper at the start of each day meant I was mostly flying blind, with no idea what was going to happen weather-wise.

All I had to start with was the web forecast from Saturday morning, before we got on the train. At that point it was expected that the Sunday would be rainy, so that’s the day I had the car hire organised. But it turned out that was wrong: Sunday was sunny and warm. The rain hit on Monday instead.

Monday, as it happens, was the day we had flagged to spend exploring the adventure playground and the foreshore area, which is where we headed after returning the car (cue the alarm going off again and more “No worries”), stopped in Target to buy more hankies (very sniffly noses required it), got a copy of the Standard and checked out the view from Cannon Hill. The cannons point out over Lake Pertobe, still ready to defend the town from invading Russians, should they ever show up.

The weather didn’t make the playground impossible, but it was a bit trying, with rain showers on and off for most of the day. We’d periodically have to stop the flying foxing (?) and take cover in one of the playground shelters.

Lunch was in a cafe close by, and afterwards we explored the beach, which despite the cold wind and drizzle, was nice to see. The kids wrote stuff in the sand, including a curiously enthusiastic expression of the liking of tacos. 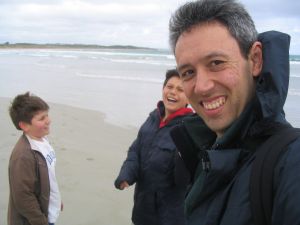 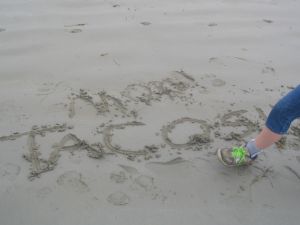 Trish had recommended the breakwater, but it just looked a little too far away, so we returned for some more time in the playground, which was a lot of fun, and certainly good exercise. We also took a look in the Tourist Information Centre, and tried out their telescope, which is certainly a quick way to use up a $2 coin.

After some time back in the hotel, we went and ate — perhaps inspired by the earlier writing in the sand — dinner at Mexican restaurant Taco Bill’s nearby, which was rather delicious.

Those telescopes are frankly ridiculous wastes of money; they don’t expand your vision very far. Whilst I don’t condemn people who use ’em, I would rather bring my own. At least, in that case, they’d be nice and warm on the skin.

Don’t get me started on Mexican food, it is fingerlicking good. Tacos, burritos, nachos, and Hot Senoritas (mexican women). LOL

What clever and manipulative children you have Daniel. Great photo from Cannon Hill.

You all obviously had a ball, and what a great pic :)
*wanders off feeling peckish for Mexican food….

Daniel, the trick with country weather is the radio (well at least in country NSW). Just tune the clock radio in the hotel to a local station and you’ll get the weather with the local news bulletin :)