The rally on Sunday was good. At least a couple of hundred rowdy residents protesting against the proposed $8 billion (or $9 billion, or maybe more) road tunnel proposal.

I had prepared some notes, but sure enough, didn’t follow them when I spoke. I never do. Of course, the act of preparing notes lets me go through the factoids I need to know for when I speak. Hopefully it sounded okay; I was asked for ten minutes of speech, but probably delivered about half that. And I forgot to note that the recent survey from those ratbags at Metlink: 94% of people want more investment in public transport.

A number of other speakers, particularly from resident groups along the road tunnel path, spoke to a rousing reception. Media covered it extensively, with television reports on channels 2, 7 and 9. 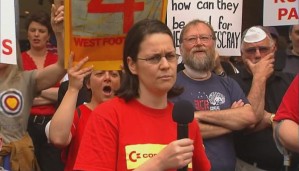 Amusingly I wasn’t the only speaker in a retro-geek t-shirt: I had my ZZap 64! shirt on, and a lady from one of the Footscray groups had a Commodore t-shirt. And a couple of hours later in Flinders Street a bloke walking past me said “Top t-shirt man!” Retro-geeks live!

With most ministers unavailable on the weekend, it was left to Health Minister Daniel Andrews to respond, saying that the forthcoming transport plan would be a balance between roads and public transport.

Ah yes, balance. Apart from the fact that Melbourne already has more roadspace than most comparable cities, meaning it’s questionable that we need more — particularly at a time when the last thing we should be doing is encouraging more people to drive — it’s worth reviewing what the last ten years of “balance” has produced: 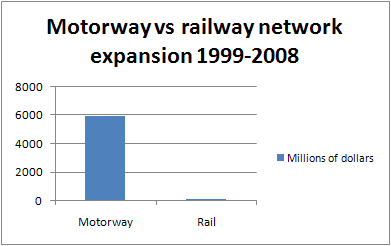 Note these figures don’t include capacity boosts, such as the M1 widening (underway now, $1.4 billion) and the Tulla-Calder interchange ($150 million), nor rail projects which have increased capacity. I’ve also assumed 3/4 of the cost of Citylink was the tunnels, Bolte Bridge and new motorway sections.

All of the completed motorway projects and train extensions are of course packed with users. In laymen’s terms it’s “build it and they will come”. In economists terms it’s “supply-led” growth.

Interestingly, while adding up all these projects, I also looked at the length of each, giving a rudimentary figure (and perhaps not entirely accurate) of cost per kilometre for freeway expansion vs rail electrification. You could expect rail to cost more if you had to establish the alignment and so on as well, though electrifying an existing track adds to costs because of things like service interruptions. 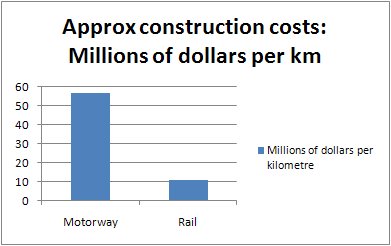 Another cost comparison for new rail lines might be Perth with its Mandurah line, which opened last year at a cost of $1.6 billion for 70 km ($22.8 million per km), but which included underground tunnelling in central Perth. And come to think of it I’m not sure if that cost included the train fleet to run on it.

6 replies on “The rally”

A fantastic rally on Sunday Daniel, I was there and it was great talking to you and hearing the stories of those residents who will lose their homes if this tunnel went ahead, 4000 homes destroyed, that is hard for me to fathom. Everyone wins with public transport and heavy rail.

Sir Rod Eddington is not even an urban planner! He is just an engineer who has been on the boards of Macquarie Bank and Cathay Pacific. The Government just got someone of his so-called intelligence to just rubber stamp their view. Was the section of the road tunnel in the report copied word for word? I certainly think so!

Nick, Sir Rod is just there to ‘sit still and look pretty’ – further proof that Kosky is blind.

I would have come along too, with Nick, but the English exam is on Friday and I don’t want to be proverbially ‘kneed in the bollocks’ by my followers for getting a low score.

And is that a nose-guard the chap on the right is wearing (on his head) in the picture?

Not 4000 Nick. Hundreds, not thousands. Still not good. And no, not everyone wins with heavy rail — residents in Caulfield are concerned about the rail tunnel proposal for this reason.

A lot of protestors had been given face masks. I guess it was to symbolise the extra pollution produced by tunnel smoke stacks.

Were you wearing a face mask, Daniel? :)

Daniel, I was referring to the road tunnel and the total number of people who spoke, and I think it was Ken Mooney who mentioned that many homes in Footscray will be destroyed, I may have misheard him, but whatever figure it is, it is still a lot. I did not know that the Caulfield section of the rail tunnel would involve “cut and cover”. Wouldn’t it follow Dandenong Road with a tunnel boaring machine?

With my statement about everyone wins, I was referring to the benifits of public transport in general.

Reuben you are spot on there about Eddington. I was wearing a face mask, but it kept slipping off.

It’s not the rail tunnelling itself which is of concern, but the digging and land acquisition for the portal at Caulfield, wherever it might be (which is not really clear).