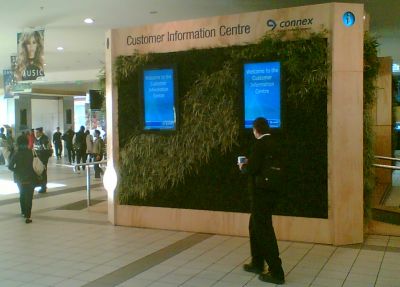 The new Customer Information Centre at Flinders Street Station is a funny looking structure. The native grasses growing out of the sides… well, I don’t know who thought of it, but it’s certainly distinctive. Staff will answer customer queries there, and additional staff will be on the platforms from November.

Extra staff on Melbourne’s busiest station? Got to be a good thing, especially given recent platform crowding issues.

Mind you, there’s over 100 stations out there on the network with no regular staff presence at all, and another 31 with only staff in the morning peak hour.

I was at the centre’s official opening last Thursday morning, and talking to a senior Connex manager about it, and asking specifically whether the staff held information on non-train modes. If a train passenger wants to know where to catch the bus to Port Melbourne or the tram to the Victoria Market, can they help? Yes they can. They have access to all the Metlink and V/Line information.

Just to underscore the importance of public transport staff knowing about the entire network — not just their bit of the empire — a couple of punters came up and asked how to get to Waverley Park. Footy tragics apparently, headed for the pre-Grand Final Hawthorn training session. Between us we managed to give them an answer: platform 7, train to Huntingdale, then the 900 bus.

Even though they were Hawks fans, hopefully they found it all right.

(A couple of people seem to have wondered if I’m upset the Cats lost. I’ve been a Cats fan for a long time, but I’m not exactly hard core. And anybody could see from the number of behinds scored that Geelong’s goal kicking was lacking on Saturday. But hey, they might have lost, but at least Geelong doesn’t have fugly colours.)

8 replies on “Directions to Waverley”

Yeah, absolutely. Better pretty losers than fugly winners. We can win next year, but they’ll always have to play in stripey poo-coloured shirts.

I see the ‘Cats’ scarf has gone from your banner pic, Daniel.

If you look closely, the letters looked a bit like ‘rats’. I sometimes wonder what those (overseas?)folks NOT familiar with AFL think about you having a scarf supporting ‘rats’ . . .

That’s probably more a comment on my attention to detail than anything else! :-)

Every single station across the network must be staffed from first train to the last. If the Rowville rail line was built those Hawks fans could have got to Waverley Park with ease. I remember freezing AFL games at Waverley Park, no public transport and bumper to bumper traffic on the Monash Freeway, and a mud patch carpark.

I am a long suffering Essendon supporter, but I have lost interest in AFL due to constant rule changes. I can’t see the bombers winning a premiership anytime soon in the next 5-10 years.

Good to hear your passive criticism, Daniel. I am more ferocious and think it’s a stupid waste of money and slightly ironic – since its within a ‘validated ticket area’, rather than where it should be: Near the steps.

There were actually a fleet of special buses running shuttles to take people from Glen Waverley Station to Waverley Park ;-).

But in absence of that, route 900 is the best regular service.

Sorry to be footballish at this late stage, but I listened to the game over the Internet here in rapture. Not only did my team come in, but I made a pretty profit, backing the Hawks at 3:1. :)

Regarding the Waverley comment I’m working in Adeliade at the moment and couldnt help notice that their main ground AAMI Stadium has no proper public transport OR carparking (or major road for that matter) – some arrangement is made where about half the metropolitan bus fleet (so it seems, anyway) is queued up at the end of the game, and cars park in the adjacent West Lakes shopping Centre on mass.

The nearest train station is several kilomentres away where you can board a (usually one or two carriage) diesel railcar with windows one cannot see out of due to the installation of a film designed to protect passengers in the event of rock throwing, but have since gone cloudy due to the acids in the cleaners used