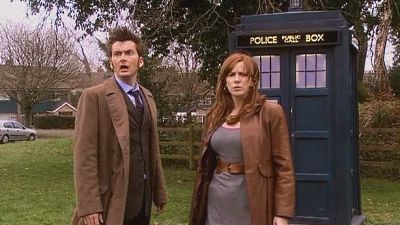 I enjoyed this season. I know I’ve loved the show for decades, but they do seem to keep coming up with new, clever stuff.

Voyage of the Damned: A little over-long and plodding in places. I suppose it was a Christmas episode.

Partners in Crime: Got the shock of my life at the end when Rose appeared, even though I had heard she’d be coming back. Other than that, not a spectacular story, but enjoyable enough.

The Fires of Pompeii: Good stuff. Liked the Roman name and Celtic gags. The Confidential episode that went with it showed David Tennant walking around the ruins of Pompeii, which was interesting.

Planet of the Ood: The Simpsons reference had the kids laughing. I was scratching my head until I worked out the boss character was Tim McInnerny. I’m sure I wasn’t the only one to think Eww when he turned into an Ood.

The Sontaran Stratagem / The Poison Sky: Hooray, the Sontarans! Hooray, Martha’s back! Hooray, so is UNIT! Laughed at the reference to the UNIT dating controversy. Chief Sontaran played by Christopher “Mike Thecoolperson” Ryan. Naturally I liked the transport politics references too.

The Doctor’s Daughter: Given the name and premise, I thought I was going to hate this, until I saw how she was created. Some neat stuff with the dating on the city sections. I’m assuming we’ll see more of Jenny in the future.

The Unicorn and the Wasp: What, two historical stories in one season? Good stuff, it kept me guessing until the end. I liked the idea of the alien basing its activities around Agatha Christie’s plots.

Silence in the Library / Forest of the Dead: Oh Stephen Moffat, you are a genius, and not just because you managed to again use wibbly-wobbly timey-wimey stuff and childhood fears made real. The whole thing had me guessing until right near the end, Doctor Moon had me creeped out at first, and the Vashta Nerada is pure brilliance. The River Song character was terrific too, though I wonder if we’ll ever see her past when she meets the Doctor.

Midnight: This year they did the main actor’s time-off over two stories. I thought this story was interesting, both for the alien that was invisible, and the way they played the “trapped in a room” plot, involving people who might consider themselves normally civilised going feral on each other.

Turn Left: Best story of the year, I thought. Bringing back the last year or two’s events and seeing how they would have played without the Doctor being involved — very clever. The acting — including minor characters like the Italian housemate bloke — was great, and it really brought out how much Donna matured throughout the series. The only thing that let it down slightly was the beetle. What a cliffhanger!

The Stolen Earth / Journey’s End: There’s no doubt about it, executive producer Russell T Davies loves a shock-and-awe season finale; he does them every year. But just when I thought I was tiring of them, this had some clever stuff, plenty of returning friends and villains, celebs like Richard Dawkins, tying up a multitude of plot threads and… well, the ultimate in nostalgia, Sarah Jane meeting Davros again for the first time since 1975. I found the ending poignant — the “loss” of Donna (or at least that whole aspect of her) was quite sad. Let’s just hope she doesn’t run into Martha or Sarah Jane or Mickey or Jack in the street…

The year’s episodes might have started a little slowly, but they built up to a great conclusion. (Go look at the early ones again and you’ll find clever forward references, like mentions of the missing planets, bees, and Lucius in the Pompeii episode telling Donna “There’s something on your back!”)

Looking forward to what happens next.

There were plenty of geekgasm moments in this series.

Rose’s unexpected return in episode 1
Sontarans
The two words. I honestly wasn’t expecting them and when Donna said “Bad Wolf” I let out a little squeal. A brilliant way to bring back a concept from the very beginning of the new series that we basically had forgotten.
Sarah Jane and Davros. I think I personally would have flown to London and killed RTD if they had no dialogue or scenes together.
K9… yep, only for a few seconds but still great to see him again :)
And the loss of Donna… well, I have theories about that but I won’t repeat them here. But I doubt very much this is the last we’ve seen of her.
And to Catherine Tate naysayers… Best.Companion.Ever. Well, almost.

I don’t know. I’m kind of iffy on this season. Much preferred the previous season with Martha. Having said that this did have some great episodes – the library double being the obvious pick. Moffat is consistently the best writer on this show. I must say that I have got to the point where I find the season finales tedious. I mean every season they threaten to blow up ever more stuff. Given that they had the multiverse ready to pop in this one there isn’t much they can do to go even more ott. Might force them to rethink what ‘better’ means. Another thing I find tedious, however much I like the character, is Donna’s constant returns. She’s supposed to be in a different universe and she’s constantly popping in for tea and daleks! Enough already. On much the same note, I am getting sick and tired of the same old monsters. How many times have the daleks and the cybermen been wiped out completely, totally, and utterly? Having so many returns from the dead critically undermines the psychological weight of happy endings since we know the same monster will be back four episodes later. Finally, I never really warmed to Donna. So I can’t say I’m unhappy to see the back of her (at least until her ‘surprise’ return in episode two of next season). Groan. Give us more Jenny, Doctor Song and Sally Sparrow from last year’s Blink, any day! With them you always had the feeling that they had more to them than just an in-your-face attitude. No so Donna. Sorry, Nathan.

Having had a look at a couple of the Torchwood episodes I hope it does not fall into the same pitfalls. But, having said all that, I’ll keep watching Doctor Who, as well.

Nathan, yeah I too was surprised (and delighted) by the return of Bad Wolf.

Konrad, I assume you’ve heard Stephen Moffat will be taking over as lead writer/Executive producer from the 2010 season.

I thought Donna could have been very annoying if her initial character had remained the same. But she grew a lot.

By the way, the bees really are disappearing.

Loved Donna! So refreshing to have a companion that didn’t fall in love with the Doctor.
Wasn’t over the moon when I heard Rose was returning but it wasn’t as bad as I thought it could have been.
The Doctor’s Daughter should have been a double episode, hope we see more of Jenny.
Grrr at having to wait till 2010 for series 5.

My favourite was the Library episodes. Dr. Moon is by far the best character and I think Colin Salmon (the actor) should replace David Tennant when David retires next season. Bernard Cribbins (Donna’s grandfather) was also excellent. The reference to the Doctor’s real name was also unprecedented – and as yet, unresolved.

The finale was excellent – but there were some very obvious technical glitches, not least being the daleks ‘turned off’ before they explode (clearly they forgot to CGI in their eyeball ‘lights’).

My main gripe lies in The Doctor’s Daughter. The first ten minutes tried to fit half an episode in, and it was poorly directed – with obviously fake tunnels and really camp ‘reprogination machines’.
I also am wary of the really irritating ‘Commander Skorr’ – General Staal’s second-in command. Too debonair a Sontaran and he boarders on the sleazy.

Next Christmas special: [SPOILER DELETED.] What could possibly go wrong?

Yes, I know about Moffat taking over and am pretty happy about it. Still, writer and executive producer are two different positions requiring different skill sets. All that I could see of Donna’s character arch is that she got less whinny. And her not falling in love with the Doctor was certainly a good thing but only in the context of the other female sidekicks all doing so – which is too silly for words. Finally, as for the bees: we’re pretty much screwed if they do die out.

On the topic of bees, my TV show ( http://au.youtube.com/watch?v=nmam6xayVSM ) in season II will involve a sinister mafia character called Mr. Vumption who “collects bees and uses underwear as napkins”.

The bee is such a perfect animal to joust with in a TV show.

Darleks speaking German in the final episode made it for me. The one thing that gets me is that they pretty much wrapped up the last 4 years of the show in a double episode. Clearing the decks for something even better I hope.

I did remember the bee comment, but the “there’s something on your back” line must have slipped past.

I missed the Agatha Christie episode though, which was annoying. I must go back and watch it at some stage.