The kids and I set off for the Show on Tuesday morning. It had been about a decade since I’d been — ditto for Isaac, who went with a childcare group some years ago, and we’re not sure if Jeremy had ever been before.

Tuesday turned out to be a good day to go. Despite a slight threat of some showers, the weather looked good and in fact it never did rain, at least not on us.

The train got us to the Showgrounds pretty quickly — the kids seemed bemused by the idea of Showgrounds railway station existing purely to serve the venue. As we’d been able to buy the Show tickets at our local station, we went straight in, a cacophony of amusement rides greeting us just inside.

Up above the crowds a death-defying ride was dangling some foolhardy individuals upside down and swinging them around by their ankles. Or so it seemed. We could hear their screaming above the noise, and the kids — not the bravest when it comes to this kind of thing — vowed there and then not to go on anything so scary. I’m not overly enthusiastic myself about being shaken around like a ragdoll, and agreed with them. 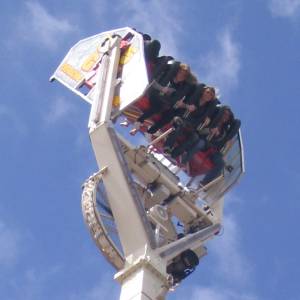 We wandered around, first exploring the nearby Showbag hall. Once upon a time you had to remember to buy The Sun on the right day to get an advance list of showbags and their contents — these days it’s all on the Show web site, so we’d planned ahead.

I’d emphasised to the kids that they shouldn’t go mad spending all their pocket money, as we’d just end up with lots of junk food and crap toys — not to mention the supposed “Total value” of the showbag was likely to be inflated. The companies involved don’t get into this game to lose money, after all. They came away with 2-3 bags each, a mix of junk food and crap, and me with just a Cadbury one. Ultimately I can’t resist chocolate.

First stop after that was the nearby Dodgem cars. This proved to be a lot of fun, though the small track was rather overloaded with cars, and for much of the time we were in dodgem gridlock.

The Grand Pavillion had a number of free food samples which the kids eagerly devoured, and since it was approaching midday, got us thinking about lunch. It also had a temporarily unused kitchen demonstration area, where Jeremy noted with some amusement a laptop computer had been left on top of a stove, as if to cook it.

We took a look at the food court-ish area of the pavillion, but nothing grabbed us and we ended up buying burgers and so on outside. For some reason in the area we were in there were 10 tables but only 15 chairs, so quite a few people ended up standing around eating their lunches.

After lunch we looked around the Victorian government pavillion. Jeremy got a demonstration from a fireman on how to escape from a house quickly, both kids got to sit on a police motorcycle, and take a look at the inside of the back of a divvy van — without being driven home in it. Unlike past years, there was no sign whatsoever of a Myki display… 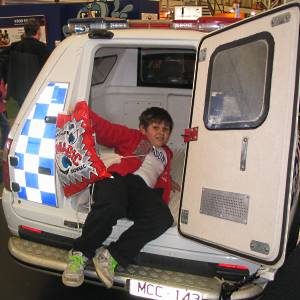 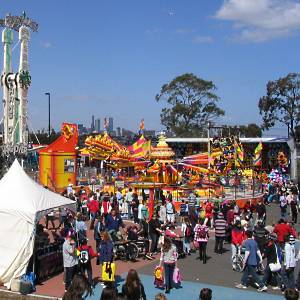 You’re going home in the back of a divvy van / Showgrounds, with the city centre in the background

In the stadium (which replaced the old arena, of which the only thing left is the grandstand) they were doing horse stunts. Elsewhere was wood chopping, and pigs in obstacle courses, and sheep and cows just standing around. One display had brightly-coloured cow statues, which were pretty cool. It was good to see that some of the traditional agricultural/rural influences were still there.

The kids then had a go on the Euroslide, a huge slippery-dip which purports to be the largest in the southern hemisphere. They liked it so much they had a second turn later on, and we also encountered a miniature train and a multi-level Giggle Palace-type house of obstacles.

My sister had asked via SMS if there was a Thomas showbag for young Leo. I let her know there was — $20 for a bag full of plastic crap, none of which really had anything to do with Thomas or trains, but which had the Thomas logo on each item. That’s the way it goes with merchandise for the toddlers I suppose. She looked at the web site herself, acknowledged it was crap, and said to go ahead and buy it for him.

By about 2:30 we had seen most of the Show, and decided to head home. The traditional inspection of the bag contents on the train ensued. 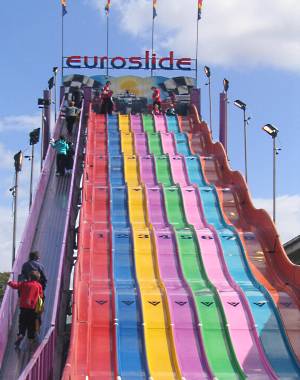 We had a total of 7 showbags between the three of us (one bought for someone else). Looking around the train carriage, it was apparent that other families had been a little less restrained in their spending.

In fact one family observed in the Showgrounds had their pram loaded up with inflatable baseball bats. It left me wondering what they were going to do with them all. Just leave the kids alone that night to bash the hell out of each other, perhaps. “Here you go kids, go mad, whack away!”

This Herald Sun article notes that some families spent hundreds of dollars “to pass our childhood memories on to our kids”. It does add up surprisingly fast. By my rough estimate, we spent about $180 — $52 admission, about $45 on showbags, about $30 on lunch (we took water bottles with us), and the rest on rides. But the kids paid for their own lunches, showbags and most rides, which is a step towards them learning to be a bit more independent.

And the bottom line is we had a good time, and didn’t come home with too much crap.

Ahhh yes, the yearly trek to THE SHOW. I’ll be there on Sat with my ankle biter. Hopefully won’t be to crowded thanks to some sporting event.

But I question the purchasing of bags-o-crap before everything else. We leave ours until we have finished for the day, as that way it leaves us un-encumbered for lots of animal fondling, and other hand-related activities.

And yes, expect to come away lighter of wallet, and sorer of foot, that is for sure. But still, for one day of the year it is a pretty good outing.

I went yesterday with my brother and we capped our spending to only $134 when we had $150. I have not been to the show since 2005. As you get older the show loses its appeal. Alot of those showbags have rubbish in them. I liked the meat and animal sections. It is also very hard to find decent priced food, I had to search over an hour to find a place where I would not spend more than $20 just on small snacks. The rides are good but they all add up and the big ferris wheel was also a great view.

It might be interesting, but I would never spend as much as PlatinumEuro has said he spent on gimmicks.

I refuse to go to the show, the smaller country shows have more bang for your buck and are of better quality, plus you’re not hemmed in by crowds of junk food hyped kids going nuts.
I notice no one has admitted to splurging on the $10,000 show bag…doesn’t everyone take that amount in their wallet to spend at the show?! :P

Didn’t go this year but did last year – first royal show in 30 years (though many country shows attended).

Stuart: agreed – leave showbags to last. Though none appealed to me (value to me = <$1 per 50g chocolate!) and I bought none.

PNE: Food. Easy. The CWA stall is the only place to go. Plus you get to sit down which is welcome.

Jayne: country shows. Can be good. Eg demonstrations of farm machinery, irrigation, solar power and ingenious plumbing, wood chopping (though also at the Royal Show), community groups with stalls, plus the local politician or two to hassle!

Showbags. These are a new concept for me; our county and State fairs offer no such valuable goodies for sale. Free plastic rules, jar openers, notepads, pens/pencils, fly swatters, yes. Discounted goods from merchants to get you to try their products? No.

So I perused the web site about Showbags (through your kind link) and am now wondering why on Earth Australians buy M&M candies when you also have the better-tasting, better-colors (chocolate) Smarties avaiable?

Ever seen the Smarties sold in the US? They are pure sugar, no chocolate – more like tablets. Awful.

I went to the show in 2004, and didn’t buy any showbags. Is that embarassing?

I have never heard of showbags either until you described them and I plan to go to the show tomorrow to see one in person! Can you look inside to see what you are getting before you buy one or do you have to get stuck with a bag of unwanted crap? State fairs in the USA are a lot of fun and have animals and junk food too. Funnelcake is a very good Pennsylvania Dutch treat and this is usually served along with corndogs and cotton candy.

Yes Jed; at the stalls they have the bag contents on display, along with the price and the claimed value of each item.

Hi again, I went to the show today and had a great time. It is indeed like a state fair in the USA but with an Aussie twist no funnelcake. A corn dog becomes a dagwood dog and cotton candy becomes fairy floss. The food and drinks were expensive except for the $2 open face grilled cheese sandwich. The food and beer I had were good though. I looked at but passed on the showbags as a kid would enjoy the crap in them them but I would not. I was impressed and glad that the showgrounds has its own train platform which made getting to and from the show very easy. There was even an announcement at Southern Cross station to direct people to platform 14 to catch the showgrounds bound train. I would not want to fight traffic and have to park a car at such a big event. Like you said there was no way to validate a train ticket at the show grounds platform but quite a few Connex staff were present and this might have deterred a few people from trying to get a free ride.

I can remember tasting sushi for the first time at the Wisconsin State fair in Milwaukee in 1986. My dad and I boh tried it and my mom was quite annoyed that we ate raw fish and might get sick.

When I was young going to the Sydney Royal Show I was told by my older brothers that when they were young all the show bags were free and called “sample bags” this would have been in the mid sixties.
The show was a magic place as a youngster full of the sights and smells of the rural country side.

I havn’t been for years as it was getting too tacky and expensive.

for free tastings we have the dairy pavillion here at the Perth show. compete with each other to see who can go round and round the longest before we get either full or kicked out :)

When we planned a two week Victorian holiday, we talked our kids into going to the Melbourne Show instead of the RNA ‘Ekka’ here in Brisbane. Sadly, the kids were very disappointed as the Bris show must be three times the size of the Melb one. Not because of the rides, etc, but the animals, displays and events.