I’m getting used to the “new” car. You know how it is when you switch, especially between manual cars, and you have to learn the feel of the accelerator and clutch for the new vehicle? Otherwise you either take off too fast, or stall it.

Things I’ve noticed about the Astra which are different from the old Magna: 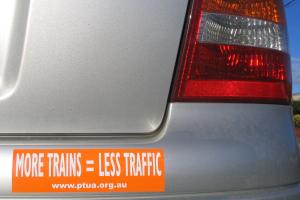 The gear stick is at a different angle. The Magna’s seems almost vertical next to the Astra’s.

Despite the Astra being a smaller car, it seems reasonably roomy. The ceiling seems higher. Leg room is reduced, but I’m already used to it. I’ve considered reflecting this by getting the customised licence plate “TARDIS”, but given the $395 cost — I don’t think so. Just can’t justify it. (Interestingly, according to the VPlates web site, “DALEK”, and “DRWHO” are already taken. But amazingly perhaps, “DANIEL” is available.)

Not just roomy, also zoomy. It accelerates much faster than the old beast. On the first day, a couple of times I took off so fast from the lights I nearly pranged into the people in front. I must confess I tried to see how fast it takes off compared to other cars on Wellington Road. The only one I’ve noticed get to the speed limit faster was a Jeep Wrangler, which apparently burns about 50% more fuel.

Maybe it’s the silver paint instead of black, or maybe it’s just a better design, but it doesn’t seem hot when left in the (winter) sun like the Magna gets. Will be interested to see how it goes over summer, and how good the aircon is.

I’m already noticing it’s using less petrol. The theoretical fuel consumption is 20% less, but I suspect it may be even lower. (Apparently alloy wheels alone can save 10+Kg off the weight of a car; and the Magna may have been burning more than advertised.)

The Astra is not without its faults. The left side of the driver’s seat squeaks when changing gears (eg when pressing down the clutch). As does the windscreen wiper; it may need a new set of blades. That’s what you get in a $10K car, I guess.

The turning circle seems much smaller, although it’s just 10.3 metres instead of 11.0.

I may get to the stage where I don’t understand how I ever survived without remote keyless entry.

Love the cruise control, for those occasional jaunts on the motorway.

I’m getting used to the indicator and windscreen wipers being on opposite sides. Though once or twice I have wiped the windows accidentally. 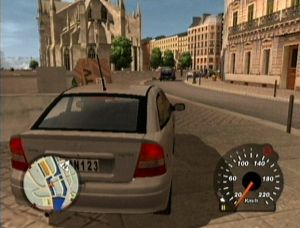 I do need to get used to the electric windows — specifically, closing them before stopping the engine, though you can do that thing where you lock the door with the key and the windows will close.

And finally… both Midtown Madness 2 and Midtown Madness 3 have an Opel Astra modelled in them (the former is a download). It’s only a 3-door model, but it means I can zoom around in a virtual London, SF, Paris or Washington, driving like a maniac. Woo hoo!

5 replies on “The Astra”

I am getting used to the clutch in my car too. I haven’t owned a stick shift car in over 20 years. I lurched it forward twice when starting the engine forgetting to push in the clutch and to have the gearshift in neutral. It’s good that the handbrake was on tight. I am used to just hopping in and starting the engine in an automatic trans car. I also have to get used to the signals and wipers being reversed, shifting with the opposite hand, and driving on the opposite side of the road. Roundabouts are a new thing for me too. They are very rare in the US. When using the 2 lane ones I feel as if I will cut off another car in the outer lane when exiting from the inner lane. In the US we have the famous 4 way stop sign intersections. I have not seen a 4 way stop sign yet in Australia. Perhaps a virtual 4 way stop is in the game in a US city for you to try to figure out who has the right of way.

You’re brave Jed. If I was adjusting to driving on the opposite side of the road, I’d stick to an automatic, definitely.

I don’t think 4 way stops exist in Australia. I’ve never seen them outside the USA.

I like zippy cars. We have a Daihatsu Sirion which is even smaller than your Astra, runs on the smell of an oily hag and easily weaves in and out of traffic.

I was lucky enough to drive a 1980 valiant on the weekend! Its owned by a mate of mine who is a mechanic so hes done heaps of work to soup it up, including putting a racing clutch in it which caused me to stall it about 5 times before I actually got going – was the ride of my life though! I love the old column shift.

4 Way Stop Signs are crappy. I hate them – there’s heaps near where I live in Columbia MD. It’s like playing ultra slow chicken with really dumb and ill mannered opponents.

Give me a decent roundabout any day.

However, the locals don’t seem to get them. The folks drive the wrong way around the roundabout that leads into my apartment complex. One day, there’ll be an accident there.

Driving on the other side of the road is not hard. After the first week, I have not made any left turns into oncoming traffic.

In those first few days… let’s just say I’m real glad about traffic light patterns that has oncoming traffic stopped whilst turning into them (left turns and straight ahead are done simultaneously, and all four directions take turns at most intersections).