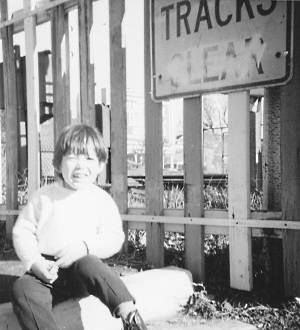 When I was a kid, my dad would take us to Camberwell Civic Centre every April or so, to see the huge model train exhibition they had there. We’d wander around for a couple of hours and I would dream that one day I’d have a really big, detailed train set.

Early on I had Lego trains; the ones with the blue rails, and coveted the mains electric ones, which I saw in a foreign language Lego catalogue that snuck into a Lego set I got. But I had the push and battery variety: the 171 goods train and 182 passenger train. Those red and blue couplings taught me about magnetism.

By my teens I had a handful of HO model trains; a mix of Hornby and Lima trains, including I think a Hornby Trans-Australian engine (have no idea if it was historically accurate), and a Lima Indian Pacific set. At the time we were living in Inkerman Road, St Kilda, in a rented duplex, and there was a bungalow out the back which I got to use for the trains. But I never did get around to building a proper layout.

A bit later I got the 1980s era Lego electric trains “Ideas book” courtesy of my UK uncle. A year or two later the trains went on the market in Australia, and although by that point I was arguably too old for Lego trains, I saved up my spending money from my parttime job and ended up with a 7740 Intercity express, and a 7730 Steam freight train. Both sets had numerous stickers for different operators you could choose to stick on the sides of the trains. Vicrail (by then defunct) was included, but I chose the German Railways logo, because its DB initials matched mine.

My sister and I had a Lego town built up with loads of buildings, vehicles, people, and way more train services than a town of that size probably deserved.

I’m sure a lot of these trains were at least partly funded by my dad (who also funded the computers when I got interested in those.)

Dad also took us to the Railway Museum at Williamstown regularly. We’d climb in and out of the trains and run around like maniacs and look at the displays there. 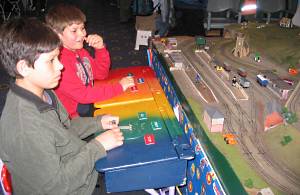 And he let me read his copies of newsletters from a mob he had joined, called the Train Travellers Association, which in 1984 became the PTUA. In his younger days, he’d been interested in various aspects of activism, though I don’t think he was active in the TTA.

The other week I took the kids to the model railway exhibition at Caulfield racecourse. Quite good. Lots to look at.

The advertising said it was the largest in the state. I was chatting to one of the blokes there. I wondered if it was the same one that used to be at Camberwell every April or so when I was a kid. Yes, same one. So there you go.

And they still have the U-Drive, where for a small fee they let the kids drive a couple of model trains for a little while. In my youth, I think they were just plain engines. Nowadays (perhaps inevitably) they’re Percy and Thomas.

We haven’t been to the Railway Museum since last year, I think, but now that the warm weather is coming back, I’m sure it’ll happen again in the near future.

Our parents have funny influences over us. Bits of them appear in us, and obviously some stuff we continue passing down the line to our kids. 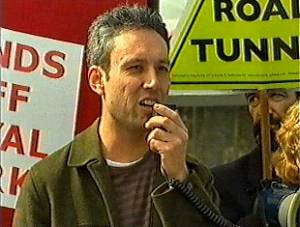 In my case, I didn’t end up becoming a hard-core train enthusiast, nor do I have a bunch of model trains. But clearly aspects of his interests have popped up in me, and I wonder what of me will pass down into my kids.

Happy Father’s Day to all the dads out there.

5 replies on “My dad and the trains”

I used to love going to Williamstown when I was a kid. Lots to see and tinker with. I also remember being admitted into train yards @ Hurstrbridge (or was it Eltham) and playing with the switches…to the scrutinising eye of the then station master. I read a while ago there was some threat to the Williamstown rail yards…something to do with land and council and whatever else.

I used to love Thomas the Tank Engine and his friends, that is exactly why I love railways and trains. I have been to the Puffing Billy, Williamstown rail museum, and at a stop on the puffing billy there is one of the largest model railways in the world.

A lot of the rare trains at the Railway Museum are stuck out in the rain coz the sheds are full of W class trams.

The Auran Trainz simulator is available pretty cheaply at most gaming shops and can give you a pretty good feeling for building, owning and running your own railway system, without taking up all that floor space. The interface is rather European (i.e. peculiar) but it’s great fun to play with.

Loved the LEGO trains (as well as LEGO in general) when I was a kid. I had the 7710 set. It was a push along, but from memory you could buy a motor and electric conductor pieces, which could be added to the existing tracks later on. I also had a station and a level crossing. Good times, good times…

I remember going to Williamstown when I was in grade 2 on an excursion. From memory we ran rampant around the place. I suspect my teacher that year may have been an enthusiast because he used to photo copy pages out of the ARHS colouring books for us to colour in.