The zone system has its faults, such as anomalies with the boundaries, and a big jump in fares when you cross a zone boundary. But it’s one of the best things about Melbourne’s public transport. Its introduction in the 1980s led to a big boost in patronage, and in terms of ease of use, it remains the best way of charging for trips. 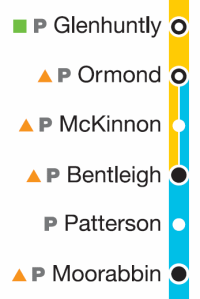 Where I live is walking distance to a zone 1 station, meaning I can do my usual commute to the CBD with a zone 1 ticket, saving over $500 per year compared to living in zone 2. That was part of the aim when I was house hunting.

But I’m actually in the zone overlap, thus while I can use zone 1 on the train into the city, almost any other trip requires a zone 2 ticket. Even the bus to Brighton (which is also in the overlap) curiously needs a zone 2 ticket — one of many anomalies with the boundaries.

While I could moan about that not being fair (and actually, I do from time to time), until they fix it, I figure it’s part of the cost of living on the outer-edge of zone 1. So beside my Yearly Z1 ticket, I have tucked in my wallet a 10×2 hour Z2 ticket for those trips (remembering that the Yearly is valid in both zones on weekends).

There are rules about when you can make a multi-zone trip on multiple tickets. Normally you need to have a single ticket for your trip, but if you hold a weekly or longer ticket, you can use a second “extension” ticket for the extra zone. If you can’t buy it beforehand (eg you are travelling from a location that sells only zone 1 tickets, into zone 2), you can buy the extra ticket at your destination.

[Source if you want to quote chapter and verse: Victorian Fares and Ticketing Manual 2008, chapter 11, page 94]

11 replies on “Living on the edge”

Also on an overlap here but it’s good!
I can travel to Monbulk, Belgrave, Gembrook, Cockatoo, Pakenham,Brighton, Mordialloc, (and from there down to Frankston) etc on just a zone 2 for the whole day :)

I recently read somewhere (I think Frank Fisher’s book ‘Reponse Ability’) that the monies gathered from the sale of PT tickets only really cover the cost of providing, managing and enforcing the ticketing system itself and barely (if at all) contributes to the running cost of the transport. Is that true (-ish)?

Another of the points was the social viewpoint that the ticketing system baffles some people and is inconvenient for others, so that leads to reduced patronage.

The counter proposal is that we all pay a ‘tax’ instead of tickets. It would make sense from a number of viewpoints – not least given that we already in someway pay publicly for the transport and (if true) the ticketing system is just an added burden.

No, it’s not true – especially recently with more full fare payers on the system, and revenue shooting up to over $550m/year (up about $200m from a few years ago). Metcard costs about $50m/year to run (Myki will be about double that if you include the system establishment costs), and I forget how many ticket inspectors etc there are, but even if you take them into account, there’s still a lot of revenue going into running costs.

Good on Frank for getting into the debate; he’s long been active pushing sustainable transport. Don’t agree with him on this though.

I have often thought one of the silliest things about the ticket machines is the inability to buy a zone two ticket in zone 1. So for instance If I want to go to MSY in Box Hill (geek heaven), I can go on the weekend and use my zone 1 and it works fine. But If I go during the week, the only proper way to do it and have my ticket work at Box Hill without having to explain myself to inspectors is to get off at Mont Albert, by a ticket, validate it, and then go to Box Hill on that zone two ticket.

Stupid, but I’d rather do that than deal with the Nazis.

Try living in Sydney… the rail ticket system sucks! Can only buy a ticket from one specified station to an another specified station. Very antiquated and inconvenient for non-commute trips.

At transfer stations (e.g Ringwood or Caulfield), there should be a consistency in the zoning by four stations in every direction so as to allow for people to change with ease. Furthermore, most transfer stations are also economic hubs which ties in well with the short-distance trips I’m proposing should be mitigated.

An alternative to the overlap is to increase the number of zones and have smaller fare increases between each zone.

I love how that the far from Moorabbin to Caulfield and from Stony Point to Lara is now the same! (Thanks to Lara’s fares being aligned to Zone 2)

Jen, you can get a Travelpass (weekly) or Daytripper (daily – $16) which allows travel on STA buses as well, but tough titties if you need to make any other trip on two modes! Heck on private buses the ONLY ticket available is cash fares paid to the driver.

I think it is pretty unfair that the (discounted, all zone) weekend tickets are so hard to actually get. You can’t even get one from most stations; they have to be found “somewhere” out in suburbia where most things are closed by the time you need one!

I think it would be a nicer move to just make 1 zone tickets valid for all day everywhere on weekends. Otherwise people get sucked into buying a couple of 2 hours, or what have you. The powers that be would moan that the machines etc are too hard to change, but they could just make the ticket in$pector$ aware, for instance, instead of fining everyone. It would be a good public relations move too.

I think they might be just banking on the extra $$$ they make from people going out on weekends. It would be interesting to know the actual numbers.