I almost did a double-take when I saw this on the news last night. 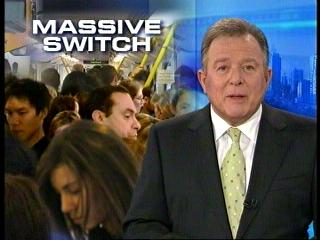 Why? Because I recognised it as being this, snapped by me on my phone, and originally used on my blog: 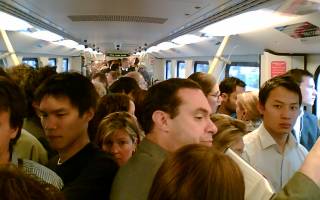 …plus a little bit of this, snapped by me and originally used on the PTUA web site… 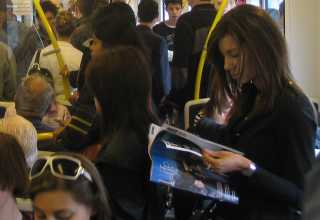 It looks like a part of another picture has been added to the very bottom left, but I don’t recognise it.

Most amusing. And not entirely surprising — both pictures are in the top five if you search Google Images for crowded melbourne train.

Glad they found some good pictures to get the message across!

(The first pic has also been used in The Age print edition a few months ago.)

And the story? Well, lots of extra people using public transport is good. But them having to squeeze in because there are hardly any extra services… that’s not so good.

9 replies on “I recognise that!”

The bottom left of the image is made up of the heads in the middle of your second pic ;-)

I agree with Merak.
Were the news resource people too wary of trying to claw their way onto a crowded train to take their own pic ? :P

We are all packed in like sardines onto trains. It would not at all surprise me if “shovers” with white gloves were employed on the train network, Oh wait…we have ticket inspectors who bash people. Get rid of connex, Lynne Kosky and her 1700 bureaucrats!

The Letter of the Day in today’s Herald Sun suggested reopening former rail lines. Eg. Oakleigh via Camberwell, Sunshine to Newport, East Kew to Fairfield. I didn’t know these even existed. The letter suggests the corridors for this already exist but I looked at Google maps and couldn’t see it myself.

What’s your take on this? Whilst I agree that cross-suburban trnasport is needed, I think we need to fix the problem of getting people into the city in peak first.

Sardine index currently at 98%. 100% is when people can’t move at all. 0% is a virtually-empty carriage.

@Liz
Well, I do recall that just after Fairfield Station, there looks like there is a somewhat abandoned railway area, so this could the Fairfield-East Kew link that you’ve brought up.

Liz, yep the Outer Circle ran from Fairfield to Oakleigh via East Camberwell (and includes the present-day Alamein line), the Inner Circle from Royal Park via Carlton to Clifton Hill, and there’s a freight rail line from Newport to Sunshine, and another from Sunshine to Broadmeadows. A few others are around: here’s a list. Some of them are quite visible on maps, as linear parks and bike tracks.

Some of them have some merit, though most most travel patterns are still radial, and extending lines to Rowville, South Morang/Mernda (which is an old line), Doncaster etc would be higher priorities.

I have an apartment in Deepdene and the complex on which it sits borders the old outer circle line. In the late 1980s I walked the track from Fairfield to Whitehorse Road (Deepdene) with a historical group. Much of this park of the track is now a walking/cycling track.

Also in the top five: