I went to see the Art Deco exhibition at NGV International last Friday night. I would have gladly paid, but happily went when invited as part of a corporate thing, which was great, as there were no crowds. I’ve long liked art deco, and there’s some terrific pieces, highlighting that the style influenced not only the art world, but also the design of luxury and every day items, architecture, film … it was all over the western world.

You can’t take cameras into the exhibition. So here’s some of my own pictures of art deco from around Melbourne:

Mosaic on Newspaper house, Collins Street. I’ve written about this before, and a painting version of it appears in the exhibition. My childhood home, East St Kilda. It ain’t the Chrysler Building, but this 30s design has lots of straight lines, and the stairwell (tall vertical glass section near the middle) really shows off the design. 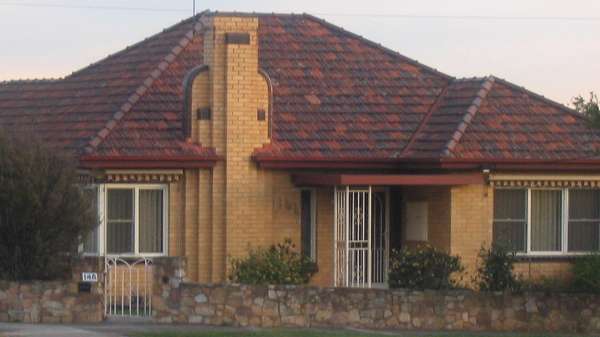 Chimney, Bentleigh. This is a few streets from my house. Probably unnoticed by most people, the house would have been built in the 40s or 50s perhaps? 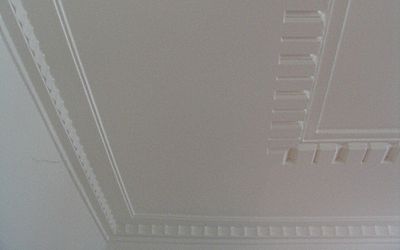 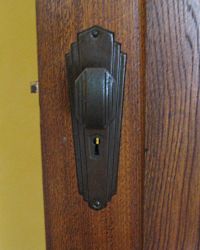 My house (circa 1928): ceiling detail and door handle

From Wikipedia: The Spirit of Progress train from 1937 — a model of this is in the exhibition, and a huge picture of it adorns the outside southern wall of the gallery. Check this great picture of the train racing an aeroplane. I just love the styling of the engine; it’s just a facade over a conventional steam engine, but it looks great. And it was fast — even today, the trip from Melbourne to Albury is just 17 minutes faster than it was in 1937.

PS. Some of the carriages from the Spirit of Progress are actually still in use! (They were pulled out of service in 2006, but I understand have since been re-introduced due to overcrowding on V/Line.)

Love Art Deco style.
There’s an Art Deco Society in Melb that sometimes does walking tours with an expert guide around some suburbs/city.

Check out Overheard In Melbourne (http://community.livejournal.com/overheardinmelb) for an overheard from the exhibition about the mosaic.

I was at the exhibition that same day and for a second was worried I’d been overheard saying something stupid (happens often)!

I thought it was a great exhibition and I even sat through An Introductory Talk to get the most out of it. Shame about the crowds though, you needed a lot of patience to really check everything out.

If you’re interested in more pics of the Spirit of Progress, you can search the collection of digitised PTC photographs on the Public Record Office Victoria website at http://proarchives.imagineering.com.au/index_search.asp?searchid=41

[sorry plugging my own organisation but at least it’s relevant]

I would think the Bentleigh chimney house would have been built in the fifties. Regardless, I like it.

Jus: Thanks; pictureaustralia.org also has a lot of stuff (including PROV material)

I have noticed that many of the buildings in and around Melbourne have these art deco fetures. I have seen many chimneys similar to the one shown. Miami, Florida (my previous home) has an art deco historic district located in South Beach, a section of Miami Beach. Miami Beach is on a barrier island and it is a seperate city from Miami itself. Many of the art deco hotels were built in the 30’s and 40’s. Until the late 80’s and early 90’s this was a very run down and even dangerous part of the city. Now it is very popular and has been fetured in many films.

When I read things like this Daniel it’s one of the few times I wished I lived near civilisation…..I wouldn’t call Alice Springs civilised. I’m green with envy!

Art Deco houses might not be around for much longer. Seems to be the status quo to knock every house down in the inner suburbs and put up butt-ugly townhouses.