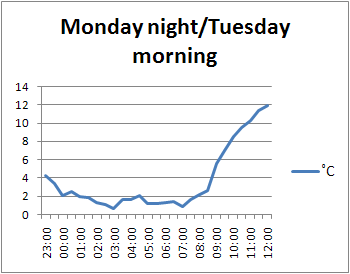 Winter is really upon us. I can tell without checking the weather reports that it’s been cold overnight. Monday night/Tuesday morning was probably the coldest night since I’ve moved to Bentleigh, based on the evidence:

It left me regretting not taking my big overcoat with me to work that day — it may have a daggy 80s collar, but at least it keeps me warm.

Those in the really cold parts of the world are probably chuckling at this.

But spare a thought for the Arney family of Pakenham, whose house is without a heater thanks to a screwup by the Department of Housing.

Daniel, so long as you can recognise that it is daggy eighties collar, all is well with the world.

You got that right about people in the cold climes chuckling. Particularly since in the particular cold climes I happen to inhabit (Austria, this week) it is currently thirty-something degrees and the middle of summer. So we have two reasons to chuckle: we can think ourselves made of sterner stuff (or at least more frost-resistant stuff) and we can take pleasure at luxuriating beneath a tree while the sun beats down on the garden. Would you like some white wine with mineral water to cool you down?

Actually having lived in colder parts, I can honestly say I’ve never been as cold anywhere as I have in Melbourne.

There are probably several reasons for that – one being that people who live in colder places have better insulated houses and heating, and tend to dress a lot more sensibly for the weather.

Also, wind is a factor. It was rarely windy when I lived in Vancouver…so even when it was below zero it wasn’t as bad as a windy 10 degree day in Melbourne.

If you want another location to look at, there’s a guy near Kooyong and North who publishes his results on the web. He’s accredited by BOM.

Also true for living in Hong Kong – which has average min temps of around 9-10 deg C in winter and maybe 15 degree days – feels bloody cold.

But then HK homes (apartments) generally do not have heating of any kind (maybe a few reverse cycle split aircons now), the homes are draughty and the summer temp rarely gets below 24 degrees (even at night, when you need aircons on to be able to sleep well).

So I guess it all depends on what you are used to.

That chill factor and weather is Spring, not Winter.
All the fruit blossoms are bustin’ out all over, everything in sight (well, my 2 foot vision radius)is heavy with flowers about to spring forth within a week and the sweet Spring grass has come through for all grazing animals (not including my hubby) :P

Man it has been a cold Winter 2008. I just came back from Hawaii and it was 88’F. A couple of nights ago the temperature in the outer suburbs dropped below zero.

Whilst I have sympathy for people who have no heating…who in their right mind has eight kids? Don a condom and demand a scrapping of the insane baby bonus!

You use water to free the car from ice?! Why not scratch it, like with an old CD or something?

My new built in 1961 apartment in St Kilda East is indeed more chilly inside than any place I lived in the USA even with very much colder 0 F/-18 C weather outside. Those places had much better insulation, double glazing or storm windows, and central heating. This apartment surprisingly has no heating or A/C installed and I had to buy some electric space heaters to keep warm. When they are turned off the temperature falls to 15/59 degrees inside. I only use the heater in the bedroom at night and it is quite chilly in the rest of the place in the morning. I have a gas stove and water heater and I don’t understand why a gas heater would not be present too. It would be cheaper to run and also put out much more heat. At least here in Australia with 240 volts one can plug in a higher wattage heater or two heaters on the same circut without blowing a fuse. In the USA plug in appliances on ordinary 120 volt household circuts are limited to 1500 watts as they use close to 12 amps at that wattage. Any higher wattage appliance or heater requires a special 240 volt circut to power it.

We use newspaper to de-ice the car. Either just use it to scrub the ice off the windscreens and widows, or if you know it’s going to be cold the night before, cover the windscreens with a couple of sheets. The broadsheet pages of The Age are perfect. It looks bad but it works.

Whatever you do, don’t use the windscreen washer if think it’s still below freezing, you’ll just get more ice. This is experience talking…

The best way to de ice the car windows is to start the car and turn on the defrosters. Once the windows heat up above freezing the ice comes off easily with a scraper. If de icing spray is available in Australia(I don’t know if it is)it will quickly melt frost and light ice. After a midwest US ice storm one almost needs a hammer and chisel to open the doors let alone de ice the windows. Don’t forget to pull the wipers free as the blades and motor can be damaged if they are turned on while frozen to the window.