We all did stupid things when we were young. 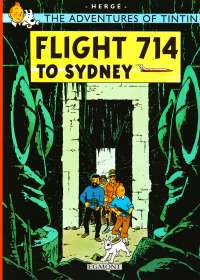 I’m ashamed to admit that one of the sillier things I did in my teenage years was to dispose of my Tintin books.

After a while I realised my mistake, and started collecting them again, book by book. (I decided I preferred the full-size versions, not the 3-in-1 small editions.)

It’s taken me a few years, but last week I finally got the last one to complete the collection*: Flight 714.

Actually since I first owned it, they’ve amended the name to Flight 714 To Sydney, to better match the original French title, though I suspect I’ll always know it as just Flight 714.

When I bought it at Dymocks (their end of financial year 20% off sale) I had to ask for it at the Special Orders counter. I asked the lady why this was the case, and she said that Tintin books, apparently more than anything else in the store, let alone the graphic novel section, get stolen a lot.

Re-reading it brought back some happy memories. Though I got the biggest laugh out of a bit I’d forgotten about, with the Proboscis monkey. And I like the mystery of their rescue.

*My collection does not include The Lake Of Sharks. I originally owned it, but it was not actually written by Herge, and the story is pretty naff. And actually, I don’t have Alph-Art, his uncompleted final work, either, and I don’t really want Land of Soviets. I do have a lovely edition of the original version of Congo that my sister gave me, and a number of very good books about Tintin.

11 replies on “The last Tintin”

Hello there
You should get anyway the books not in your collection, they are quite nice, especially “Land of Soviets”.
Guess that no more Tintin books are made :S

Gawd I used to love Tintin!
Don’t feel so bad, I’ve heard heaps of people gave away/sold things only to regret it later.
But I still don’t regret giving away my ex-hubby, for some reason :P

fully loved tin tin when i was a kid! was watching some boys jam their guitars by the bonire on the weekend and one bloke had a picture on his that everyone recognised but it took about 15 minutes before we could say where we recognised him from – it was the captain!

George, I don’t think there’s any danger of them going out of print any time soon.

why? whats flight 815 from sydney?

The plane that crashed on Lost

A quick Google figured it out, and led me to Oceanic Airlines, a commonly-used TV/movie name for a trouble-prone airline!

What’s wrong with The Land of the Soviets? The book, I mean, not the country.

Like Congo but moreso, it lacks much of the sophistication and wit of the later stories, and presents the visited country in something of a clichÃ©d manner. I suppose I could get it for completeness, but I doubt I’d ever read it as much as the others.

The Tintin movie – written by Steven Moffat – is due to be released in about half a year, I heard. I can’t wait.

My favourite Tintin would have to be TinTin and the Picaros.