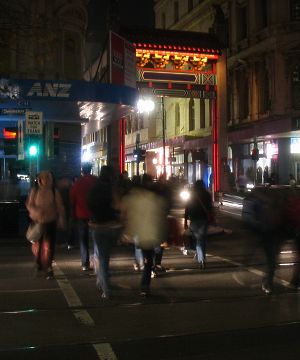 Brian K posted about different types of people and their behaviour at pedestrian lights: those who don’t press it, then look confused when nothing happens; those who press it once; those who rapid-fire press it dozens of times, in the mistaken belief that it makes the lights change quicker.

(Ah. It seems I’ve written about the latter group previously.)

Brian takes the attitude that one should assume that anybody who has got to the crossing before you is not a moron, and has had the sense to press the button. Personally, I take the Trust, but verify strategy here, and if I haven’t seen them press it (and nobody is crossing in the opposite direction), I’ll try to subtly sidle up to the button and quietly, softly, press it myself.

Oh, and you know what? When I press the button, if it doesn’t have a light to indicate the button has been pressed, I’ll press it again. Just in case it didn’t register the first time. Just one of those slightly quirky traits that mean I’m descending into the life of an eccentric old man.

I’ll also look ahead of me as I walk, and will sometimes jog to the light and press the button if I know I’ll otherwise miss the cycle and have to wait. Yes, that probably does look really strange to passers-by.

(Why the button can’t have the green man jump into the cycle, if there’s still time, I don’t know. Traffic lights where that happens are very rare.)

Of course, sometimes you don’t need to press the button at all.

For instance, in Melbourne’s CBD. They obviously figure that there are so many pedestrians that there’ll always be someone who wants the green man. Fair call.

But there are some confusing exceptions. Where I used to work in Exhibition Street, the crossing next to Parliament Station would not require the button to be pressed, but only during business hours. Or maybe it was something like 7am to 7pm. Something like that. At other times, it would need pressing, which meant confusion for people who normally crossed when it didn’t.

But it’s a well known fact that the more you press the button the quicker the green man appears!

Same goes when waiting for a lift and in a lift. The more you press “up” or “down” or “close” the quicker the God of elevators will respond to you!

But I think I’m in the same group as you though Daniel. I’ll just push the button anyway, despite a person getting there first, just in case. I don’t trust nobody.

I should confess to pressing the button in succession multiple times – I know it doesn’t make it faster, but it occupies my hands during boredom ;)

That reminds me. Alan – I recall reading recently that the ‘door close’ button on most modern lifts does absolutely nothing – just exists for psychological reasons!

I reckon that’s right about the Close Door button. Never seen one do anything more than the lift was going to do anyway.

Although the traffic light sequence itself is most likely still changing at such an intersection, it can do so much quicker if it doesn’t have to allow a minimum time for a pedestrian to cross the road. Hence, although it may automatically assume a pedestrian is there without requiring a button press during business hours, out of hours it would be wasteful to be going through the pedestrian cycle. After all, at 3:47am the light sequence has likely changed simply because one car has triggered the change.

The only reason they make some lights, either at times or all the times, automatically assume there is a pedestrian is for the exact reason you describe – the percentage of people that assume someone else hit the button.

It would only be at a spot that’s walked by pedestrians 24/7 that would need that automatic assumption to be permanently active – for example the Rundle Street/Rundle Mall scramble crossing in Adelaide assumes there are pedestrians there 24 hours a day, while the crossings right the way down King William Street will only do so during the day.

I note that blog you refer to highlights there are only three types – like you Daniel I’m a fourth. I will push the button if nobody is there, but will still push the button if a few others are already there. If there are a lot of people there, and I cannot get to the actual button, then I will watch the study the light sequence and simply cross the road when either a) the pedestrian light goes green, or b) when I know the pedestrian light WOULD have gone green had one of the countless people blocking the button had actually pushed the darn thing!

I used to live in HK and can confirm the lifts/elevators there DO respond to the ‘close the door now’ button – at least after they have already been open for a short period.

Every lift in HK has the button. I notice many lifts in other countries don’t have them at all.

It’s a fact of life in HK (which has lifts in almost every building, either residential, commercial or industrial) that people will attempt to close the doors as soon as they get in – even if they are the only ne in there and they see others coming. You (almost) get used to having the door closed in your face a few times a day. It will be a familiar story to any expat, given the number of people I heard complain about it.

I kid you not, it happens. People will see you coming and be standing close to the button and try to press it without you seeing them do it – so it looks like it wasn’t their fault.

Human nature and the different habits around the world are fascinating (and infuriating, at times)! :-)

I can clarify that the amount of bacteria on traffic light and lift buttons is enough to kill a cat at fifty yards. They never get cleaned and have so many hands pressing them.

im a confessed multiple presser too! but when the traffic isnt too bad i dont press but instead just wait for a break in the traffic. What infuriates me as a drive is when people push the button then cross the street before the green man appears so when he does appear i just sit at the traffic lights waiting for no one! especially in peak hour when we need as much green light as we can get. GRRR!!!

but im from WA and i noticed when i visited melbourne (only for a few days) that turning vehicles actually DO give way to pedestrians! we NEVER abide that law in Perth! if we’re turning and a pedestrian steps out in front of us we blare our horn and scream out the window. bit scary when i first went to cross the street and saw all these people stepping out in front of the cars – nearly had a heart attack!

and to Reuben – TOUGHEN UP! the only reason it would kill you is if you were a clean fanatic and never exposed yourself to dirt in your life! the best way to prevent it is immunity which you build up by doing it more! no wonder everyone has cancer nowdays!

PH – I see some logic in the HK approach.

The quicker the door closes the sooner the lift goes and finishes its trip. This maximises service frequency and minimises waiting times.

If you’re waiting for others to come, and want to travel with them, the best approach is to refrain from pressing the lift button until all of the group is ready since this shortens waiting times for those on other floors who are organised and are ready to step in.

The above requires faith that there will be a frequent service. Provided lifts are maintained to ensure 100% are available and people don’t hold others back by standing in doorways then this should be the case.

I just realised that you need to press the button here in Australia or no green man appears at certian intersections. In the USA at intersections that have a walk/don’t walk sign (or white man/red hand sign)the signs change automatically with the traffic lights wether or not the button is pressed. Pressing the button sometimes will cause the light to change but I am convinced that many are mounted to the posts with no wires attached. The buttons in the US have no light and emit no sound (except for a very few new ones) and more often than not seem to have no effect on the traffic light sequence. Any other American will likely agree with this.

I’m tougher than a inflexible Walnut, Shaz. I was merely commenting on how dirty they actually are. It is impossible for your bodies antibodies and T cells to counteract EVERY germ and it is well known that toilet seats are cleaner than light buttons (or shopping trolley handles). Clearly, all those who wash their hands after doing their business are weak.

I try to use the light next to the button to tell if it has been pushed.The theory goes that the light gets brighter after the button has been pushed. The only flaw is how do I know if the light is bright or not when there isn’t a dim light to reference it against? In the end the best policy is to just press the button anyway.

ISTR the pedestrian buttons at the intersection of Bourke Rd and Prospect Hill Rd in Camberwell are some new fangled touch sensitive buttons that are quite different. Anyone who tries to cross Prospect Hill Road against the light sequence runs the risk of becoming a hood ornament on a Lexus.