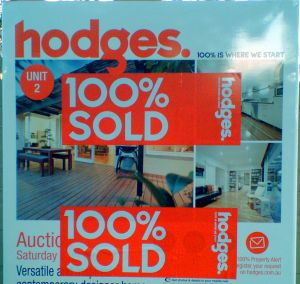 My sister and her family are moving from gentrified East Brighton to the wilds of Cheltenham. They bought a house there on a huge block of land, with a pool in the backyard. They don’t expect to keep the pool (what, in this day and age, and with Waves about 5 minutes’ walk away?) but hopefully we’ll get to have at least one Christmas pool party there.

So they had to sell their little place in East Brighton.

My sister has a lot of experience in marketing, and her husband Adrian had applied his architect’s touch to the renovation. A nice spot in a quiet street in a blue chip suburb, close to the shops and the tram (too far from the train for my liking, but oh well) meant if they played their cards right, it’d be a winner.

So they worked hard. Adrian put lots of finishing touches on the place over the last few weeks. My sister looked closely at the marketing options provided by the real estate agent, and tweaked them, as well as working out an incentive scheme for the agent. If they did well, there’d be a cash bonus. If they did really well, there’d be dinner at the Flower Drum.

I had to chuckle when I saw the ads for the place. Half the furniture had been hidden in the garage to make it look bigger and cleaner; every photo had all the lights blazing away; and despite the pictures being taken during a week of rain, the sky was miraculously blue. It looked terrific — but quite different to the house I knew.

The marketing went ahead. Web (of course), and adverts in selected editions of The Age and the local papers. Three times a week there was frantic cleaning in preparation for the Opens. But by the end, they were fairly happy that their demographic (the people looking for that type of property in that area) had been reached, and there did appear to be genuine interest.

Auction day came last Saturday, and my sister was on tenterhooks. Would people show up? Would they bid? Would it pass in?

I was nearby-ish, having brunch with friends, watching the phone for SMS updates as the auction progressed.

At one point one of the bidders stopped bidding and burst into tears.

When all was said and done, it was an outstanding result. Frankly, more than I’d have paid for it. 78% more than it had been bought for — though taking into account the cost of improvements, “only” about 47% profit in about three years.

It shows the value of having the renovation done by an architect and the campaign designed by a marketing expert!

Immediately after the auction, and before signing, the buyer was a little uneasy, and tried to negotiate for a couple of extras to be thrown in. Dishwasher? Yeah okay. That lovely (and expensive) plant in the backyard? No way! (Agent: Sorry, it’s an anniversary present.) What about those bookshelves? Pah, that’s our furniture. We’re taking it with us. (Agent: You know that’s just an Ikea Billy…)

Eventually everyone signed on the dotted line.

The agent was evidently so pleased she put two “Sold” stickers on the board.

And yes, she will get her Flower Drum dinner.

Well done!
It also depends on the estate agents too,some fight the owner all the way on marketing strategies,I’m impressed Hodges listened to your sister.
Gets them a BIG tick,along with their Flower Drum dinner. ;)

I like the 100% SOLD stickers. Can it be sold any other way

Hodges? Not such a salubrious sounding name is it?

A house is not actually sold untill settlement, so it could be said that it is 10% sold once the contract is signed and the deposit payed (unless the deposit is not the usual 10%) and it will be 100% sold at settlement.

I sold my home through Hodges late last year.

After the property was passed in on Auction day Hodges put the hard sell / high pressure on me to lower my reserve and to bargain with the highest bidders.

A heated discussion followed in which I repeatedly and strenuously reinforced to him that I was not going to sell for less than I thought the property was worth.

Three days later it sold for $25,000 more than the price at which he was trying to get me to lower the reserve.

He didn’t give a damn what price we got, the difference in his commission was tiny. He just wanted his money and to keep his auction clearance rate up.

And real estate agents wonder why they rank so lowly in peopleâ€™s estimation.

Was the plant in a pot or in the ground?

No relation to the property company. I’d like the money – but not the job!

A ‘hodge’ is defined as ‘a typical English farm worker’ in a dictionary of names I once saw. I’ve also seen other definitions, but I rather like this one.

I just sold my apartment in the USA. The price of real estate in Miami, Florida is falling rapidly now and I could have made much more money if I had sold it a year or two ago. I still made a handsome profit on the property however. I might buy a place here in Melbourne in a few years after I am setteled in well.

Homes in the USA are almost never sold by auction and the few auctions I have watched here were amusing. The price of real estate here is very expensive. In the USA now one can buy a house for under $100,000 in some cities.

I love others’ explanations of how a house could be less than 100% sold. Although, if you count the deposit as 10% sold, it sounds like this agent was jumping the gun in thwacking stickers up on exchange of contract. Maybe it was more a 100% vote of confidence in the buyers’ commitment.

Housing prices in the UK are slowing and slipping (rather than the predicted crash) but the mortgage crisis means loans for first-time buyers are presently very hard to get. Net result: the market still locks out first time buyers!

Maybe 100% sold means they aim to sell 100% of houses they list, and is some sort of slogan they use to gee up their salespeople?

Perhaps they offer selling of 80% of the house, with the rear rumpus/granny flat being sub-leased out.

@Vaughan, the plant was in a pot, but the upper branches secured to the wall. I think she was just trying it on by that point.

Jed you’re so right! My brother in law is from the US, and his family are always telling me to move there as I could buy a nice little house for about $80,000!!

Although the problem now is having a job to pay the mortgage…and that pesky visa issue!!

Melbourne property is SO overpriced, which is why I still live at home with the parents, I refuse to pay high rent and can’t afford to buy (yet…I seem to always travel with my deposit!).

Cheltenham is a good location though, I’m in the next suburb and work in Heatherton, I’m sure they’ll like the extra room and you’ll enjoy the pool while it lasts. Oh and it’s the same train line for you now :)

Well I know how your sister felt. Having been through the entire “sell” issue at Xmas-jan It’s a stressful time. Congrats to them for selling so well.
We are now putting ourselves into more stress meltdown and building agian. :) At least they have avoided that hairy chestnut.