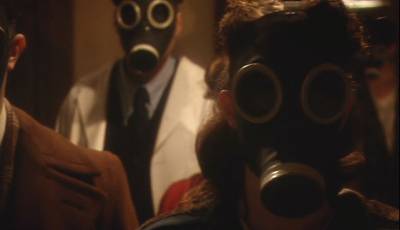 Doctor Who fans, rejoice. Acclaimed writer Steven Moffat, who wrote some of the most memorable (and Hugo-award-winning) recent stories such as Blink and The Empty Child, has been appointed the next Lead Writer and Executive Producer of the show, taking over from sometimes-loved, sometimes-loathed Russell T Davies.

“My entire career has been a Secret Plan to get this job,” said Steven Moffat. “I applied before but I got knocked back cos the BBC wanted someone else. Also I was seven.” — Doctor Who web site

Would he be over-stretched? Hopefully not – he wrote four series of Coupling on his own. (Coupling included one character who was a secret Doctor Who fanatic, who in one very funny scene had a dream in which women were riveted by news of classic lost Doctor Who episodes being found.)

Moffat also wrote Press Gang, back in the day, as well as the Doctor Who spoof The Curse of Fatal Death. And I’d forgotten that he wrote the screenplay for Spielberg’s new Tintin movie.

So the future of Doctor Who looks very bright indeed.

(Reminder to commenters: Please, no spoilers for those watching Australian broadcasts.)

All that needs to happen now is for the Doctor to visit areas outside of Britain more (hopefully Japan or Egypt) and for Tennant to be replaced. In fact, I’ve done a post on that at:

Also, there should be an episode where they’re lost in the TARDIS. That would be good. It would be a concrete reminder of how the Doctor lives too.

>> Also, there should be an episode where they’re lost in the TARDIS.

That would be fantastic – I haven’t seen the vast corridors of the TARDIS explored since the Peter Davison days.

I had a little geekgasm when I heard this news. Blink is simply the best Who ep ever in my opinion. I’ve watched it so many times I almost know it word for word. Maybe I’m obsessed. It’s not like I’d buy the T-Shirt or anything…
http://www.jeevesmelchington.com/angelstshirt.jpg

If you’ve seen ‘Coupling’ (an eighties sitcom), that too is Moffat. In fact, I can’t recall any bad Moffat stuff. He’s like the boredom silver bullet.

In the tradition of the Comic Book Guy from The Simpsons, time to stock up on a wheelbarrow full of tacos for the Doctor Who marathon!

Moffat has to write stories about:

– Mummy’s in Egypt
– Clowns
– Spiders
– Paintings (I dunno, but it could be scary)

Those stories should be well scary and great tv!