It was easy to find a taxi this morning in the city, but more difficult to find a driver — or at least one who would take you anywhere. 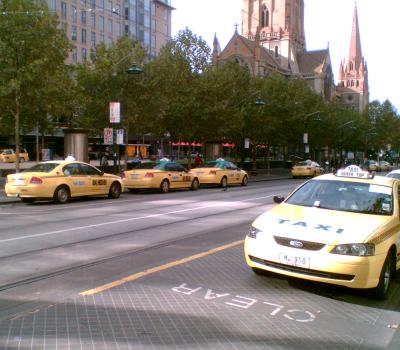 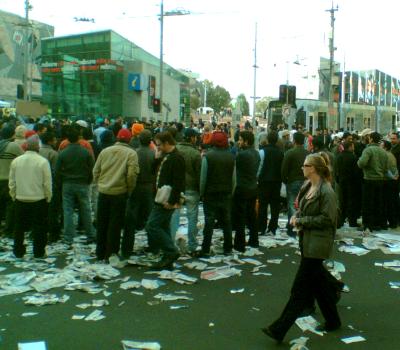 Taxi drivers were protesting about driver safety, blocking the intersection of Flinders and Swanston Streets. Quite a few empty cabs were parked nearby.

Despite claims of massive traffic disruption, most people seemed to be working around it okay. The trams have a fairly-well established plan for this kind of thing. Buses too would have been diverted. The trains weren’t affected — in fact it made it easier to get out of the station and across the street.

Cars? Who cares. Only a minority of people drive into the city anyway, and usually it’s cars blocking other cars. Not that that stopped the radio traffic people from moaning about it.

Fair enough that the cabbies should protest. Everyone has a right to feel safe at work. Tram drivers have metal cages to lock them away. So do many bus drivers. The transparent protective screens proposed (and already used in Sydney and other cities) seem a good idea. And if my memory serves me correctly, the authorities have been talking about this for a decade or more.

In the end it seems the government has seen sense, with safety screens to be fitted, and other measures to be taken. By 2pm the blockade was disbanding. When I went past at 2:30, all the leaflets had been picked up, and it was like it had never happened.

(If you’re wondering, the PTUA does not normally get involved in taxi-related issues.)

I use taxi’s every day to travel between work and home and agree, taxi drivers should be afforded more protection and security.

Therefore, I’d be happy to pay an extra $1 per fare to fund the extra security.

But why stop there?

I’d also be happy to pay another $1 per fare to fund taxi driver map/direction education.

When their take home pay is a piddly $4 per hour, they should, at the very least, have a safe working environment.

Late Tuesday evening I was walking down Swanston St. when I started seeing a lot of cabs parked everywhere. I then saw several hundred people sitting in the intersection of Flinders and Swanston Sts. cheering a person with a megaphone. I had no idea what was happening but it was quite a sight to see. I then learned about what happened to the cab driver the night before. He was lucky, in the USA they are sometimes killed. Barricades in cabs are quite common in the USA and have been so for as long as I can remember. They should be simple to purchace and install here too. It would be even easier for the cabbies to have a can of pepper spray with them. Many people in the USA, especially women, carry this. Is pepper spray available here in Australia too? I have not noticed anyone carrying it here.

I stopped by at lunchtime and spoke to one of the people standing – he was a cabbie also. He said that they were prepared to sit/stand for as long as it took. I was really impressed at their determination to stay there. (thankfully by this time they had their shirts back on)
It was freezing overnight on Tuesday night.

While I support (like most of planet Earth) the right to have a safe workplace, I am not sure the cabbies in this instance quite knew what it is they wanted.

i listened to 3AW and the ABC and every interview with a cabby on site went down the path of “We want a safe work place, we want the minister to come down here” When the minister did so and said “no discussions until you end the blockade” I thought that (for a change) she was right.

The fact they remained there until late afternoon was a shame and really alienated the very people who support them: the public.

I certainly hope pepper spray is NOT available here. That would give criminals an unfair advantage. America stupidly believes that by arming their citizens, they can cut crime – but as evidence explicitly shows, nothing could be further from the truth.
It is also a band-aid solution. We need to have more police, more education and more mental health services. It’s really quite logical this way.