1. Contrary to this report in the Geelong Advertiser, the term “bustitution” has been around for years. I don’t know who first coined it.

A number of regular services to and from Geelong have been replaced by coaches through April, giving rise to a new term being coined by the Public Transport Users’ Association – “bustitution”.

Association Geelong secretary Paul Westcott said yesterday that while some delays and faults were understandable, one of the most frustrating things for passengers was a lack of communication.

Paul says the reporter hadn’t heard the expression before, and was quite taken by it.

2. When you’re creating a little museum quiz (as seen on billboards at stations at the moment), you should at least try and get the multiple choice answers right. 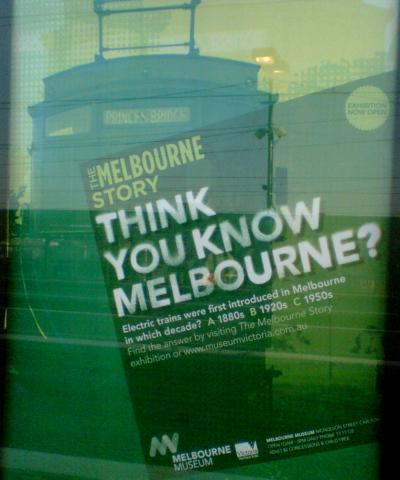 I don’t pretend to know everything about Melbourne, but thanks in part to a book I’ve had since I was a junior gunzel, I do know that Melbourne’s first electric trains ran in 1919, starting with Sandringham to Essendon:

As the Sandringham line was a very busy one during the early years of the [20th] century, it was chosen along with the Essendon/Broadmeadows line, with which it was through-worked, as the first line to be electrified. It was opened for electric traction as from 28 May 1919. — The Electric Railways of Victoria, Dornan/Henderson, 1979.

I’ll agree with you re: first electric rail line, Daniel. That fact is backed up in “Trains, Tracks, Travellers” A history of Victorian Railways by Marc Fiddian.
A nickname given to buses that replaced trams is “gutter transport”. Pretty much sums it up! lol :P