It was only at the third petrol station yesterday that I found a pump [air] that was working.

Found three ATMs in close proximity all out of order at lunchtime.

Was anybody else listening to the ABC 774 (3LO) news this morning at 7:45am when somebody pressed the wrong button and The Twilight Zone music and Rod Serling’s introduction played over it? Or did I imagine it?

Actually the revamped ABC Melbourne web site is a bit like the Twilight Zone. Can’t find anything anymore.

It’s true, I was incredulous that Myki executive Vivian Miners got a $140K bonus.

They’ve almost finished re-paving Centre Road. I’m not totally convinced it’s an improvement, and who knows how much it’s costing. Evidently red brick is out of vogue, and asphalt with coloured bits is the “Now” look in streetscapes. I do like the plants though. 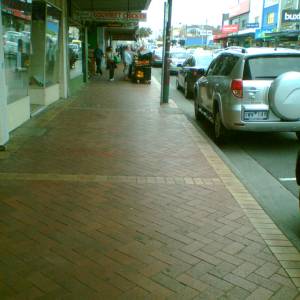 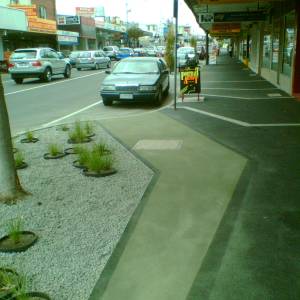 PS. Clarified, the not working pumps were air, not petrol.

And I went to great lengths to NOT record ads when I taped shows off TV!

Presumably wall to wall pavers all look the same, even the one that’s raised a centimetre, creates a tripping hazard, and costs the council $X in lawsuits every year.

Boring ashphalt with the occasional paver looks boring, but at least the bits that could represent a trippin risk look a bit different than most of the footpath.

I didn’t notice the sidewalk when I was walking on Centre road but I did notice the interesting pedestrian crossing at the railroad tracks. It reminded me of a petting zoo. A sign said it was a prototype being tested out. I forget what the sign said it cost but it seemed way too expensive. There must be an easier way to keep people safe.

I heard the ABC glitch, and thought I was in the Twilight Zone!!!

Get the PTUA to publish an open letter in newspapers asking Vivian to return her bonus. I don’t know what she could say in reply. If she’s stupid she might say that $140k is tiny in comparison to the overall cost.

Missed that ABC news stuff up. I would have thought, no I think, it is fully automated. Yes, I too hate the new ABC Melbourne website.

I did not hear about Miners’ bonus. Must have been for attendance and not performance.

Everywhere seems to paving like this now. I like it when it is fresh. Much cheaper to lay I would think too.

That a rain garden you see there in the right of the ‘new’ Centre road image. Filters off excess nutrients and contaminates.

Vivian is a guy.

you don’t think that with the glass ceiling in place that Victoria’s highest paid public servant would be a female, really?