I’m sure anybody who drives a particular trip regularly has in their mind their thoughts on optimising it: which route to take, which lane to be in when, best time to set out, alternate routes available if there’s a major snarl — like there was on Wednesday. 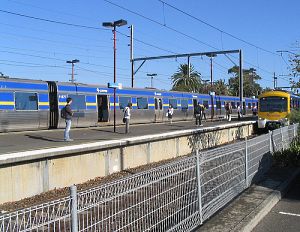 What about PT users? Do they think this process through as well, or do they always stick with the same trip?

My primary commute is by train: from either Bentleigh or Glenhuntly into the city, depending on the day. Because I’m me, I’ve thought probably way too much about how to make it — at least in theory — as smooth as possible. (As it happens, when Wednesday’s chaos hit, I needed to head for home on the Sandringham line, not the Frankston, which was disrupted.)

Maybe I just think about these things too much? Reading back that last point, I think the answer is a definite Yes.

But there is a lesson here: if you’re a regular PT user, it makes sense to know, before something like Wednesday’s mess happens, what your alternative routes are. Parallel train lines and connecting bus/trams, that kind of thing. It can save you a lot of heartache when disaster strikes.

Reminder to self: Yearly ticket ran out on March 29th. I’ve already got the new one (PTUA discount price $1015 per year for zone 1 — order yours today), but I’m using up the compensation Dailies I’ve claimed from Connex in the past year.

Reminder to everybody else: Hold onto your monthly/yearly ticket (used or validated this month) and be ready to claim compensation at the end of this month. Apparently with Wednesday’s mess, they’ve almost hit the compensation threshold already.

11 replies on “Optimising the commute”

You are not the only one to think like this. I know some train platforms and where the train stops and so the carriage nearest the exit and have done the train to Richmond to catch a train I have just missed. It seems to me that the platforms were planned so that loading is spread a bit evenly over the train. If they were planned nowadays, I bet this would not happen. We used to walk very fast when getting off the up train at Prahran to illegally get across the line back in the days when there was a subway, which no one ever used. Off the train right at the exit, a quick walk, and across the line before the train started. Many used to do this. Now it is just pedestrian gates and everyone waits.

Maybe I could call this Part II as it deals with transferring from train to tram 67 at Glenhuntly.

In all cases time is of the essence so you must be on the rear carriage (from city), front carriage (to city) for any of this to work.

(i) Westbound tram (to Elsternwick)

Easy. There are stops near the station both ways you go. The closest one (east) requires crossing a road, the further one (west) doesn’t.

Glenhuntly is a train crossing point (see timetables where they’re normally 1 minute apart off-peak) so both might be closed.

But if you alight from a city bound train and then a Frankston bound train comes along you’re in luck as the boomgate will have held back the tram as well, while the up line will be clear to cross (gates open) on the pedestrian crossing.

Dicey! Again there are two stops – west and east of the line.

The west crossing requires backtracking and waiting at a pedestrian crossing. If there is a tram in sight you will almost certainly miss it by the time you’ve walked 4 times the most direct distance and waited for the crossing lights to change.

Unlike in the westbound direction, the stop east of the railway line is about 200m away, near Subway on Grange Rd.

However if stepping from a city-bound train the rear carriages of the train will be passing by the time you’re out of the station. This (just) gives time to cross. Don’t blush as you walk past the sex shop or the condemned former Chinese restaurant. Then bolt along Glenhuntly Rd towards Grange road AFAP. Even assuming the tram was visible at the boomgate when you crossed, you’ll (just) be able to catch it.

The other choices (ie the nearest stop or crossing at the Grange Rd lights) will probably cause you to miss the tram unless you’re saved by another train keeping the gates down longer (or a wheelchair passenger for ditto).

If a down spark, then a Stony or Long Island comes through then your exertion will have been wasted as you’ll have close to 5 min waiting at the stop, but that’s probably better than missing it, especially during peaks when tram times vary.

Going from a Frankston-bound train to the tram has a much lower chance of success. This is because the train will have cleared the boomgates which will be up again. If you see a tram the chance of boarding it is low unless you’re saved by another train to hold it for you at the boomgates. Again the Subway/Grange Rd stop will probably be superior.

Boomgates (and traffic lights) are the pedestrian’s friend against the scourge of unbroken road traffic and advocates of grade seperation need to ensure they don’t lessen conditions for pedestrians.

If you miss the tram, don’t despair. Though its shops are decayed and scummy, Glenhuntly is a great viewing spot if you wish to watch darwin award contestant auditions.

I find the trams handy but a bit slow. I have yet to try the trains as I have only arrived in Melbourne on Thursday. The Metcard seems handy so far. I noticed that not everyone validates their card when entering the trams. Perhaps they are hitching a free ride?

I simply don’t have a choice. And it sucks.

I’m always near to last carriage Moonee Ponds to Parliament so I can get out the lonsdale st exit. And backwards going home…thats about all the travelling I do at the moment.

Soon to change though!

I still find myself struggling to remember which station to go to, in the city. Particularly if I’m heading home from uni at around midday. It’s 500m to Flinders Street or 750m to Parliament. I guess that being on the Alamein line now doesn’t help much either. So pretty much for optimal travel times I have to remember:
Prior to 12:50pm; Walk to Flinders Street to get home
From 12:57pm onwards; trains start running via the loop; this will be 1:05pm at Parliament.
From 4:24pm until 6:49pm; Direct Alamein trains depart from Flinders St, though isn’t fatal getting a Loop train at these times (it may even overtake an Alamein train on the way to Camberwell).
After this, catch a Belgrave/Lilydale train once again from loop; except for one more direct Alamein train at 7:20pm.
After 7:35pm refer to a timetable as Alamein trains drop down to half-hourly (no shuttle trains at 8:12pm or 8:42pm at Camberwell!).

If only they run the loop in one direction it’d make things a lot easier. Oh and more direct Alamein trains.

Once I get to Burwood, I often wonder whether it’s quicker to walk the little bit north to cross the railway line and walk back on the western side or stay on the eastern side and walk south to the bridge. The later is a less pleasant walk, however, due to traffic on Lithgow Pde. Though between about 2:50pm and 4:35pm, there will be a city bound train just after the Alamein train goes through, so at these times I take the bridge route.

As for contingency plans, the 75 tram does this quite well, it’s just a bit of a longer walk. If I knew in advance and it were like last week (fortunately I had no classes on and avoided going into uni after I looked at the weather report), I could get on at Hawthorn. If I only found out at Camberwell, it’s a bit of a walk from Camberwell. Alternatively I could catch it from the city or if I were stranded at Richmond/Burnley, then I could walk to Bridge Road. If the Glen Waverley line were operating then I could also catch a train to Glen Iris then a 734, though that particular bus requires a Zone 2 ticket and is infrequent. So the 75 is probably still preferable.

Jed, plenty of people get on the tram who already have a valid ticket, and can’t be bothered fulfilling the beancounters’ wishes to re-validate it. But then again, some people are fare evading too.

Ren, I know you’re on the Werribee line, but not sure where. There are some alternative routes which are useful to know if there are big problems (eg delays of 1+ hours), eg the buses from the city to Footscray; others from Footscray to Laverton. There’s also one from Sunshine to Laverton. They may not get you home, but they may get around a big rail hiccup, and/or close enough to get a lift or a taxi the rest of the way.

Jeremy, it’s not that far from Camberwell station to the 75. Maybe 10 mins walk. Not much if there’s a major disruption in progress.

Well then it’s a 12 minute walk home from the tram, so if I knew earlier Hawthorn would be the preferable place to transfer. Then again sometimes I deliberately get off at Camberwell, perhaps visit Borders or if there’s anything I need from the fresh food market, then take the tram. So not a huge drama.

I never take the train into the city in the morning even though I live only 15 minutes walk away from the station. I have 3 different tram routes to choose from and can leave at 7.15am to get into work by 8.30am to start at 9am for most of them. If I’m feeling lazy I would take the 16 and 96 so I don’t have to walk.

My best travel tip is that if you are travelling home in peak from Parliament and 1-2 trains have been cancelled, including a stopping all stations to Frankston, then go have a relaxing drink somewhere for an hour or so til the congestion stops and it becomes physically possible to board your train. Much less stress that way…

Very thorough assessment. The only thing missing was which services carry the cutest passengers to make the trip more pleasurable.