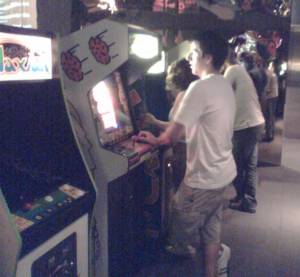 Down the stairs we went, into the darkness. Electronic beeps and bloops could be heard from all directions. Flickering lights.

Most of the classics were there. Centipede. Galaga. Ms Pacman. Asteroids. Space Invaders. Donkey Kong. And more. A handful in cocktail tabletop cabinets, but most the way God intended, in proper stand-up cabinets.

It took me back to the arcade amusements section of Luna Park circa 1985.

Except Luna Park never had MAME hooked up to a big projector screen. Back then if people wanted to observe your prowess, they had to huddle around.

ACMI’s Game On exhibit had all this and lots more. Apart from the section devoted to arcade games, they had areas showing off home computers of the 80s and 90s, consoles from the 80s to present, handheld games (Donkey Kong Game+Watch!) — and almost all of it playable.

I’m not sure the kids fully appreciated the plodding reality of the original IBM PC (sadly it wasn’t wired-up). Also in static displays were a Sinclair ZX-81 and an Apple II.

The kids and I went berzerk playing everything we could lay our hands on. We’d planned our trip to arrive right on opening time, and it paid off, as later things got reasonably busy, but we had a go on most things. I got high score on Pacman clone Puckman, as well as Ms Pacman. Some people had put very high scores on Donkey Kong already, so no go there, but I did get third on Galaga, despite the not-quite-reliable fire button. The Donkey Kong G+W left me trying to remember which of my friends had it. (I remember owning Donkey Kong Jr, and Donkey Kong II in this medium.) The sit-in Star Wars game was terrific, and Asteroids with proper vector graphics was great.

Of the newer games, R-Type on the PS1 (?) was fun, and I couldn’t quite get the controls on Golden Eye, but had a merry old time blasting away. Isaac and I spent some time beating each other to a pulp in Way of the Exploding Fist on a Commodore 64 (yes, I was wearing my Zzap!64 t-shirt). I couldn’t quite figure out Jeff Minter’s Tempest, which was running on an Atari Jaguar. Didn’t get a chance to play Wii, though they had a few PS3 and XBox 360 games on display, some quite spectacular.

Highly recommended, particularly if you grew up pumping 20 cent coins into machines. Oh, and love the giant Mario out the front in Flinders Street — one side a Donkey Kong pixellated original, the other in high-res.

(I’d post a pic of the giant Mario, but alas my five-year-old Canon A70 camera appears to have just died.)

6 replies on “Back to the arcade”

Alas, I got an invite (non-transferable) to the opening and had to miss it because I was in Adelaide for a meeting. [grumble] Stupid work! Sounds like it was just as fab-o as I had anticipated.

(I still haven’t got around to fixing the problem that sometimes messes up IE6.)

And the exhibition sounds great. I went one day early and saw them setting it up and all, but the great picture of Mario outside also caught my eye. I was thinking of going, and seems like I definitely will go soon enough now.

I have memories of the arcades from the early 80’s too. I usually did better at pinball than the video games. They were a great way to kill an afternoon in Chicago when it would be too cold to play outside. I’m talking about temperatures below 0F/-18C, not uncommon during a Chicago winter. My brother and I also spent many hours with our Atari 2600. My favorites were Adventure(with the dragon that looked like a duck standing up)and Breakout. I also liked Kaboom, which was an Activision game. The Actvision games were cheaper than the Atari games and undercut Atari sales.

[…] danielbowen.com: Diary of an Average Australian Â» Blog Archive Â» Back to the arcade My favourites were Galaxian, Elevator Action & Defender… And my largest childhood dream to win of these machines in a competition. Posted by Andrew Filed in Links […]