When I first needed childcare, back in 2000, I first looked at council-run places. There were none without a long waiting list, so I looked at private. I found a place nearby called Wilmar, run by a lovely couple called Neville and Pat, with a handful of staff. So I signed the kids up there. It was based in two adjacent houses in Ormond, with a garden out the back with some chooks and other animals in it.

Jeremy, then about two, didn’t like it much initially. For a time I had to distract him each morning, by giving him a different coloured paperclip each day to show the staff. To my surprise several months later, they gave them all back in an envelope.

Anyway, both my kids went there on various days, until they reached school age. They both ended up enjoying it, and made friends there who went along to school with them too.

It was there, I think, that they picked up the theoretically insulting but ultimately inoffensive “silly duffer!” exclamation, which still pops up from time to time in conversation.

Over those years I earned an awful lot of credit card points thanks to Neville and Pat, but that’s part of being a working single parent, and I knew that the kids were getting good quality care from people who cared.

A couple of years ago when my sister was looking for childcare for her son Leo, I recommended Wilmar. She went along and signed him up there. 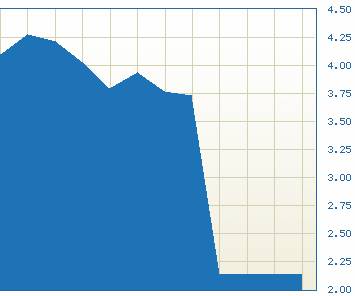 Then the news broke: Neville and Pat had decided to retire. They had sold the business to ABC Learning.

ABC Learning has been controversial at times, accused of being the McDonald’s of childcare: rapid expansion fed by cost-conscious budgets, and a cookie-cutter approach to operations which many said led to a decline in standards.

Nobody would begrudge Neville and Pat leaping at the chance to retire well. But my sister didn’t want Leo looked after by ABC Learning, and she moved him elsewhere. The last time I went past Wilmar, it was Wilmar no longer — it was ABC Learning Ormond, just another branch of Eddy Groves’ empire.

Now that empire is unravelling. ABC Learning’s share price (ASX: ABS) has plummetted over the past couple of weeks, before being suspended from trade.

Pat and Neville must be very pleased they sold up and retired when they did. They certainly weren’t silly duffers.

13 replies on “Eddy and Neville and Pat”

Hope they sold for cash and not for equity!

There was something I instinctively disliked about ABC child care right from the early days. I hated their name, taking some legitimacy from our government funded broadcaster, them cutting take home pay of staff and just the public face of the owners. But really, I think what I disliked most was the impersonal nature of their business. Surely child care is a very personal thing, not something a multi national company can do well.

I am not sure that low pay, long hours, cost cutting in childcare is exclusive to ABC Learning – people just love to bag the multi national company. We are onto our 2nd ABC center (due to moving to another suburb) and the care of my child has been very personal, warm and caring. We deal with the centers at the level where it counts – with the people who look after the children. I agree that not all centers are run well, but people should remember that there are many ABC centers that have very dedicated staff and are run extremely well.

I like your paperclip idea. I wish I’d thought of that when my kids were little.

Big overlap, Philip. From what I’ve seen, most childcare centres that include kinder/pre-school-aged care have a kinder programme.

I’m the same as Andrew, I smelt a rat years ago and felt the same way as you did. I’m not surprised at all and think it’s just karma for the way they treated their own staff. There are smaller run enterprises like Family Day Care that aren’t what they used to be. Maybe some good (for parents but especailly kids indirectly) may come out of this mess.

Funny you mention this, I spent the morning looking a childcare centers with a friend for her baby…went to about 4 and yeah they’re all pretty much the same from the outset, but it’s the small things that matter. Sadly more homely ones are so few and far between that you have to sign up the second you’re pregnant!

[…] danielbowen.com: Diary of an Average Australian Â» Blog Archive Â» Eddy and Neville and Pat It was an evil idea, profit before quality.. and with children. Child care should not be about making profits for shareholders. […]

Daniel, you are a silly duffer.

So you expect to pay Neville and Pat less than you earn? then are surprised when they burn out and need to retire before you do?

get real. you exploited Neville and Pat, period…..

the free market gave them an out…..which you and leftie dweebs can’t deal with…..

chardonnay socialists are happy as larry as long as their are proletarians around prepared to work for less than themselves…….

you are a naive……..and need to go and work in the private sector for a few years to get how the world works….

Don’t troll, Bruce. Where was I complaining?