The van we hired on the weekend was to move my Dad to a new place. As he is getting older, he needed an upgrade.

He’s very well read, and it turned out he had way more books than I expected. So a lot of the time (and load) was spent shifting heavy boxes and bags full of books. There was a bit of furniture, some clothes and papers, but mostly books.

Eventually the van was full, and the three of us squeezed in. I was in the middle seat, with my knees knocking against the dashboard, and my head pressed against the ceiling.

We had a quick bit of lunch before unloading at the new place. (Oakleigh has a fantastic souvlaki place. I can’t remember the name of it, but boy did the lamb souvlaki and chocolate milkshake hit the spot.)

We got to work unloading boxes and bags and boxes and more bags. Wouldn’t you know it, the room turned out to be right up the back, so we had to traipse up and down the corridors, past the lounge and the dining room, with all the residents watching us going back and forth, like they were at the tennis. I’m sure I heard remarks about the large amount of stuff. 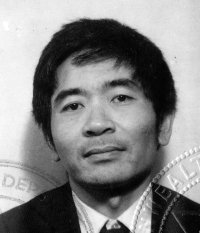 In the end there were way too many books for the shelves, and too much furniture for the room. So much so that we had to cart some of it away for another day, with Dad saying he’d sort through and cull some of the books.

Anyway, while going through I found some papers, including his old passport from 1969, with a fantastic black and white photograph of him. In this picture, he’s about the same age as I am now, give-or-take a year.

4 replies on “Coburg to Oakleigh”

Daniel
good on you for helping your dad. I can relate to your story. My mum was “upgraded” in 1998 and she’s still in the same place today (the longest current resident of the nursing home). I know it’s a worry with parents.
PS Yeah, a great photo of your dad.
Rog.

Daniel, your correct spelling of ‘traipse’ enabled me to complete Wednesday’s The Age cryptic crossword. I had incorrectly spelled it ‘traipes’ and got stuck. Thanks for that! Incidently, where in Oakleigh is the good souvlaki place (what’s it near)?

If your Dad has moved to a certain hostel off Kangaroo Rd, tis very nice and I used to work there lol.
Souvlakis rock in Eaton St Mall ;)

Peter, I think it was the Corner of Chester St and Eaton St.

Glad for once my spelling was up to scratch!