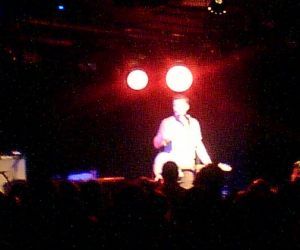 At The Prince Of Wales, St Kilda, Wednesday night.

Emily Ulman was okay. Support to the support. Polite clapping. Justine bemoaned that she rarely gets out to see live music, but twice recently she’d got Emily. It’s like rarely flying, then taking an overseas trip and getting the same movie twice. No matter how good it is, it would have been nice to have more variety.

Mick Thomas and the Sure Thing — Mick’s a genius. Superb. Why can’t all support acts be this good? Some new songs (You Remind Me was especially good — and new to me, at least), some old Weddoes favourites (such as Monday’s Experts, the ever-emotional-for-parents Father’s Day, For a Short Time), and a version of Our Sunshine (co-written by Mick with Paul Kelly) with a bit of a Spanish flavour. I must get me some more Mick Thomas CDs.

And then Billy Bragg came on at about 10:30, brandishing a cup of tea. Gigs can be made or broken by the crowd. He got a great reaction, and gave back in spades. Plenty of political chatter, some quite inspiring, urging people to get up and take action. The Yarra Song got a play, as did a bunch of oldies and some songs from the upcoming album.

A choice for the crowd between a Dylan and a Carpenters song… and the vote was for the latter. Later a version of Pinball Wizard done as Johnny Cash to the tune of Folsom Prison Blues, very funny stuff.

One… two… three encores — he just kept going, with both he and the crowd getting more enthusiastic as he went. By the time things wrapped up with a chorus-crowd-sung A New England just before 1am we were thoroughly satisfied.

It was also the first pub gig I’d been to since the smoking ban came in. Woo hoo, such a pleasant change to not have to automatically wash all your clothes and hair to get rid of the stink. Though two annoying smelly-breathed smokers did the thing where they come through the crowd behind others carrying drinks, then stop dead to claim a space where there wasn’t really one to claim, a little too close for comfort. Grrr. So I made sure to stand with my elbows pointing in their direction. After a while they went away.

But that didn’t detract from a great night.

And my plan for getting home worked a treat, too: the second-last tram (they go until 1:30am from there) to Caulfield, then the car, so I was falling into bed about 1:30, just wishing it wasn’t a school night.

6 replies on “Billy and Mick and Emily”

And just to make me even more jealous the first song I hear when I tune in to 6 Music this morning is Levi Stubbs Tears.

Fantastic night. One of the encores was basically the entire ‘Life’s a Riot …’ album.

Pinball Wizard to the tune of Folsom Prison Blues: Aren’t musical gags great? Which Carpenters’ song did Billy Bragg do?

Yeah gigs are hard on us old people ;). I have one at the end of this month and another at the end of March when I will be 6 months pregnant…must make sure I organise someone to watch my kids the next day…

I think the Carpenters song was Superstar.

It’s amazing how quickly one can be converted catching a live gig. I saw Billy some years ago @ The Forum and he won everyone over. He also acknowledged the support bands a small thing that some acts neglect to do but is nonetheless a thoughtful touch.