Oh thank goodness — they didn’t use that horrible old picture in the print edition of the Herald Sun article today. Though perhaps the one they did use (which from memory was taken in late-2006 in Swanston Street) wasn’t much better. 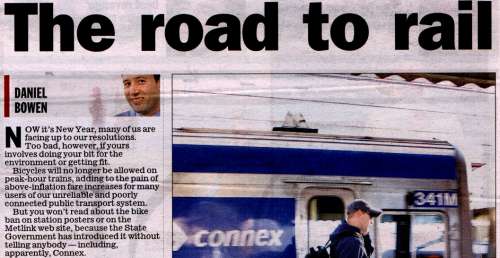 There was a bit of a typo in the article that appeared during production though. The bit that says:
“Most importantly, it [VicRoads] doesn’t hold back from lobbying the Government for much-needed road projects.”

should have actually said:
“Most importantly, it doesn’t hold back from lobbying the Government for big road projects on the basis of what it regards as the needs of the Victorian public.”

Changes the meaning a bit. But no matter, that was only a tiny bit of the article.

Unfortunately some of the comments on the HS web page appear to have missed the point. It’s not really about the bicycle ban, or crowded trains. It’s about the root causes: why PT management and planning — and thus services — are such a splintered, chaotic mess, and what can be done to fix them.

“Bicycles will no longer be allowed on peak-hour trains”

That is horrible news. For many people riding to work just isn’t possible but riding in combination with catching the train is and the majority of workers work peak hours. It just doesn’t make sense. I’m glad I read your site otherwise I wouldn’t know.

Great article in the hun by the way!

Anyone interested in taking part in a protest at recent legislation that bans bicycles on trains should contact me on wizofaus @ hotmail.com. I have a Herald Sun reporter willing to write a story on it, so just need to get enough numbers together.