Well I haven’t quite finished my Christmas shopping, but I have at least got over the hump, thanks to a few fruitful hours spent at the very noice Highpoint yesterday. It wasn’t half as crowded as I expected — and the beauty of Highpoint is you can easily get there without the car, and the endless pain of looking for a park.

It was a tad annoying though that their automated Directory thingies seemed to shut down at about 5pm (the usual closing time on a Saturday), and naturally they’ve got rid of almost all the human info booths and paper guides. It took ages to determine that in fact there is no Dymocks at Highpoint.

Toys R Us was looking like a bomb had hit it, particularly the soft toys section, which was awash with soft toy carcasses as far as the eye could see. 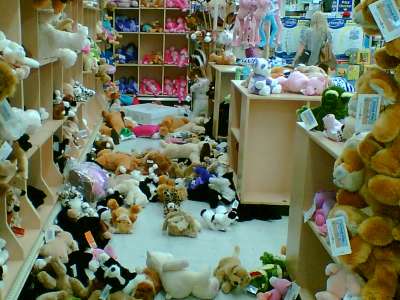 Some of you might remember me talking about the SuperScrabble my mum invented a few years ago, combining multiple boards and sets of letters for a Scrabble extravaganza. Turns out the makers of Scrabble have figured this out to (I’m going to assume they didn’t just copy her idea), and released an official SuperScrabble, which I found in one of the games shops. 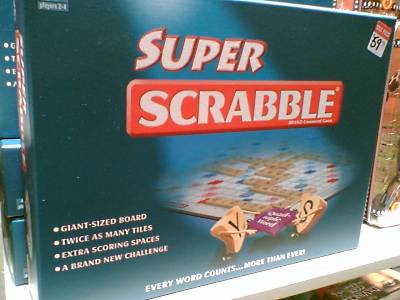 I haven’t actually bought a stupid amount of stuff — I’m determined not to. But a few little-ish things that people will (hopefully) appreciate receiving. ‘Cos there’s an awful lot of crap out there in the big wide world of retail.

Anyway, it’s just about over, and I’m looking forward to the day itself, when the shopping can be put behind us and we can do that spending time with family that’s the important thing about Christmas.

8 replies on “The horror of Highpoint”

Not been to Highpoint for perhaps twenty years but plan to go soon to see how it has changed, and how the customers have changed. How do you get there easily by PT from the southern burbs? Train and frequent bus service?

I wasn’t in the southern burbs when I set out, but there’s frequent trains to Footscray, then either 82 tram or 223 bus both run quite often to Highpoint.

It’s a Festivus for the rest of us! (Where’s the pole?)

Daniel
merry Christmas, and thanks for keeping us entertained over the past twelve months.
Rog.
PS I could have said “challenged” or “inspired”, but, I read your blog cos it’s the best soap opera around!

Andrew, train it to Footscray station and then hop on an 82 tram. Drops you outside the Target end of the complex. 15 minute ride. Used to do it all the time.

Yeah Ren, I coulda sworn there was one, but the human said no, and Dymocks’ web site appears to confirm that.

Looks like those soft plushies all over the floor have just completed their Festivus Feats of Strength as well! hahahahaaa

have a cool yule

The Toys R Us pic totally made my day. Hilarious! Thanks for posting it.