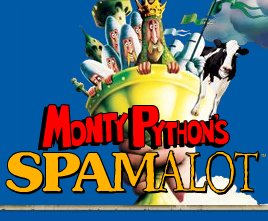 I’ve long been a Monty Python fan, but am a little too young to have seen the movies on their first runs in the cinemas. So when it was announced that Spamalot would have a run in Melbourne, I decided to see it. I went along with the kids and Marita yesterday. Warning: some spoilers.

Some audience members were obviously long-term Python fans. One guy had a Ministry of Silly Walks t-shirt on. One man exchanged his yarmulke for a knotted handkerchief.

It was very funny in parts… the consensus seemed to be that the French Taunting scene was the best. But apart from lifting bits from the movie, it also took potshots at musicals, with the well-publicised “Song like this”, and a scene where the leading lady bemoaned the small number of scenes she was in. Mostly though I thought the funniest material was either directly lifted from the movie, or at least within the main plot of the movie.

I didn’t really “get” the song about Broadway shows needing Jews to be a success, and to be honest I felt a tad uneasy when the chorus first came round. But the aforementioned knotted handkerchief wearer and his family didn’t seem offended, and happily put their hands up when one of the characters on stage asked if there were any Jewish people in the audience.

I thought the cast was really good. Whoever did Dennis’s mother did Terry Jones’s Pepperpot voice perfectly. The special effects and animations were terrific, and I loved the bit where Arthur met Tim The Enchanter, obviously hanging on wires, and said he appeared to “hover in the air without string or any visible supporting device”.

All in all, a superb show. The programme is pretty funny too.

And last night I watched Bill Oddie’s episode of Who Do You Think You Are. Great stuff. The link between them? John Cleese recently claimed (MP3) that Tim the Enchanter was named after Tim Brooke-Taylor. And if I recall correctly, Graeme Garden appeared in one of the Holy Grail trailers.

7 replies on “We’re knights of the round table”

Daniel
thanks for your excellent review. We are going next Sunday, so I won’t see the spoilers. Sounds like your kids liked it; hopefully my girls will “get” some of the sketches.
My wife taped Bill Oddie episode so we will watch tonight with relish.
Rog.

Consider yourself lucky to sit through without a die-hard fan behind you saying all the dialogue along with the film! Grrr. Happened to me with Bugs Bunny on Broadway.

Sister is going to see it on Friday night. I was around for the first run and I never really got it. There was a show on tv a while ago about Jewish and Broadway. There is a very strong connection.

I didn’t get the Jews bit either. It seemed a little forced to me, cringingly funny though. They should have just stuck with the Tale of Sir Galahad.

I’m going to see it again.

Thanks for the review, I am planning to see it.

I just commented on the SBS website. I never want to see Bill’s toes again! Plus, while his realisation of why his mother had been absent was moving, I felt they were trying to pin alot on his paternal grandmother without alot of evidence. It was like they needed to stretch the material a little too far. The Stephen Fry episode had me crying along with him.

….your milage may vary….

Yay for someone keeping the MP blaze alive! Too bad living out here in rural NSW, we never get to see stuff like that.

I saw the promo for the Bill Oddie thing, but missed it when they played it, bugger it!

yeah, there sure was a lot of cross-fertilization back in the late-60’s/early 70’s in comedy circles, huh? It’s all good :)

Tim Brooke-Taylor also wrote some early pre-Python material and toured with Cleese out to Australia (there is a photo of John Cleese being punched out on Bondi beach.) Was a good episode of the show on SBS and will be in the GROK newsletter probably.