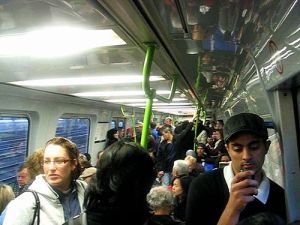 In what might become a tradition (by my count this makes the fourth time in the last few months) Premier Brumby and Public Transport Minister Kosky took a train ride yesterday to make an announcement, this time at Jolimont, then caught a train to Parliament. (You could tell Brumby doesn’t catch the train much; the TV footage showed him standing on the right hand side of the escalator.)

And this time round, it’s some genuinely good news. eight more trains on order, making a total of eighteen to arrive from 2009. That’s an 11% boost to fleet size, or space for an extra 36,000 people (assuming two trips per train per peak), which will start to make a significant impact on the current overcrowding.

Of course, they’re going to need more each year after that if patronage keeps increasing, which it will (growing city + rising petrol prices = more people on trains).

And there’s a bunch of other things they could and should be doing in the meantime. For instance, spreading the peak over more hours by running more frequent trains (including expresses) throughout the day, and stop mucking about with short overcrowded trains in the evening and weekends. And doing a full review and revision of the timetable to make sure when the new trains arrive that they can be used effectively.

But at last it seems like they’re starting to realise things need fixing, and making it a priority to do so.

Daniel
yeah, saw your mug on TV news again last night. And you’re quoted in the papers this morning.
Has the trial of free train travel pre-7am on certain lines started yet? Do you know how it’s going? Thanks.
Rog.

Or they could, quite simply, remove some seats to create more standing room.

I’m wondering if I was imagining things in my youth. I’m sure the trains used to be 7 carriages long during peak hour and only 3 carriages late at night.

I was just about to suggest that to spread the “peak” out, they could offer cheaper fares outside peak times.

With the new smartcard systems, this would be easy to do (depending on the computer programmers at the helm).

But then I noticed Roger had mentioned a trial of free travel before 7am.

This seems quite sensible.

Roger: It hasn’t started yet. Probably later this month.

Sam: Possibly, but you don’t want to go overboard, as long-distance passengers (eg 30+ mins) should be provided with seats where possible. Also trials on trams show removing seats saves less space than you might think.

Suzie: The old Tait (red) and Harris (blue) trains ran in sets of 7 carriages in peak hour, though the carriages were not as long. On some lines, 3 carriages is no longer sufficient for night time — a stark contrast to 15-20 years ago when often only 1 carriage was made available after dark.

Neil: Pricing can help, but it’s not the main driver. A lot of peak travel happens because people know if they travel out of peak they’ll have to wait much longer for a train, and have a longer journey too (almost no expresses).

It’ll be interesting to see how many people go to the pre-7am option… remembering that your journey has to be completed by 7am, so it’s pretty damn early. Personally I’m barely awake at 7am!

There’s a 7am? Is that in the morning?

It’d be nice if they stopped running 3-cars on the Upfield line in peak and peak-shoulder. Somehow I think Upfield will be the last to get anything.

Carriages all need more handholds, whether or not seats are removed. That would definitely help those standing to make more room. Why move down the carriage if you’ll be falling over all the time?

Upgrading off-peak frequencies to something usable on most lines would take away a bit of peak overcrowding. Same goes for off-peak expresses.

Splitting trains between the peaks is such a stupid move – 6 cars are split to two three-car sets at about 9:30am, then joined back to 6 cars at 3:00pm-ish, then split to 3 again about 7-8:00pm. Why not keep it as 6 cars all day, for both operational convenience and to reduce overcrowding?

Your train couldn’t have been too crowded if you were physically able to reach down in your pocket/bag and reach your phone.

Seriously, I have an idea. I would like to know your thoughts. Why don’t they replace the seats with descent hand rails in 1 carriage or part of each carriage. The seats take up alot of room. Adding some descent standing room may aleviate the conjestion. Surely my idea is chaeper than buying new stock.

Are there any spare, older carraiges available with no motors in them? They could be hooked up in between three-car sets to make 7-car or 8-car trains.

At various stations, as determined by the location of nearby level crossings, these longer trains could stop with the front or rear of the train at the platform (because they’d be too long for the whole train to fit), and London-style announcements over the PA could remind passengers to move carriages if they need to get off at certain stations.

Can it be done?

Darren, I’d call it Sardine Index 8 or 9. Could have been worse, but not much.

Philip, none that I’m aware of. Remember you’d have to have the front of the train at the platform, for wheelchairs, severely limiting operations. And only some trains allow people to move carriages. I think it would probably cause a lot of problems, and longer dwell times (which is a big issue).

There is a lot more they can do; not only in terms of expanding fleet sizes, but better scheduling and even softer options like additional staff to help with wheelchairs etc at busy stations.

And exactly how many stations have so many wheelchair passengers to require an extra staff member to load them?

Start with the obvious: CBD/loop stations, and other busy stations where wheelchair loading/unloading is likely to delay following trains. And give station hosts the equipment (eg ramps) and training to do the same at their stations.