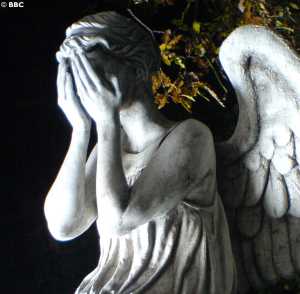 So there we go, the series has ended. Some great episodes.

The Runaway Bride: Enjoyable enough. Loved the highway chase scene — and the way it captured the excitement of the TV audience in the little kids in the other car. One day the ABC programming people will learn to programme Christmas specials at Christmas, instead of six months later. (Though it could be worse… in Canada the CBC put this episode on after the following one.)

Smith and Jones: Some fun moments, but obviously it’s mostly to introduce the new companion. Some of us who have been watching for a while thought the Judoon were Sontarans when they first appeared.

The Shakespeare Code: Oh, good stuff. Some very funny moments (I really liked the barely noted “No you can’t have yourself sketched with me”), and an interesting concept, the power of words.

Gridlock: I was put off by the concept of the multi-decade traffic jam, which just seemed a little too ridiculous. But as the episode went on, it grew on me a lot.

Daleks in Manhattan/Evolution of the Daleks: It was all going well for me until SquidMan appeared. After that it just seemed a little bit silly. But Solomon’s demise was a good antidote to the kind of “inspiring hero miraculously escapes” plotlines you sometimes see.

The Lazarus Experiment: Nothing too challenging.

42: I found this one really exciting. In space, noone can hear you shouting “I’ll save you!” Okay, so the plot was lifted from the second half of Planet Of Evil (circa 1975), but still very enjoyable.

Human Nature/Family of Blood: *sniffffff* Very clever, and one of those plots that had you wondering what’s happening. Nice touches in John Smith’s journal. (Some people freeze-framed it and noted pictures of past Doctors and numerous other series references.)

Blink: Oh great stuff from Stephen Moffat, once again making great use of time in his stories. No wonder he won a Hugo for last year’s effort. The weeping angels were superb. I wish I’d watched this episode in the dark the first time I saw it.

Utopia: Ooooh yeah. Derek Jacobi! John Simm! Captain Jack’s back, and so is… you know who! Superb, with just niggling doubts about the apparent re-appearance of 20th century technology in the year 50 trillion. Best line? “…and you two are BLOGGING!”

Sound of Drums/Last of the Timelords: Wrapping it all up nicely, though I’m getting a little weary of Russell T Davies and his mega-CGI-massed-alien-invasions at the end of every season. But it did all neatly use bits from the rest of the season: the watch/Chameleon Arch, the mysterious Harry Saxon, The Face Of Boe’s final utterance, the power of words, and more about the last great time war.

And Torchwood? Well, you’ve gotta love a spinoff. It ranged from the excellent (“Random Shoes”) to the pointlessly horrifically mundane (“Countrycide”), and not forgetting Fight Club With Aliens (“Combat”). But I can’t help thinking they could have done it almost as well without the gore, swearing and sex, and then I could have let the kids watch it. Ultimately while Doctor Who manages to include secondary themes and some deep thinking in many of its plots, Torchwood seemed a lot more superficial.

Favourite (paraphrased) line from ‘Blink’ came from the wonderful Ms Sparrow. “When you say ‘talking’ to the guys, you mean on the Internet right?” or maybe his incredulous response to Sally’s DVD collection “you only own 17 DVDs?”.

Gridlock was my favourite.

I really enjoyed both ‘Blink’ and ‘Gridlock’. As for ’42’ – fell asleep the first time and couldn’t keep up sustained interest to watch it through completely the second time.

Blink scared the bejesus out of me! (I did watch it in the dark). Of course it helps to be watching it on a projector in the middle of the night when the house is dead quiet. And then my dog opened the door to the media room with her nose and I seriously almost crapped my pants….

And I loved all the linkages in Utopia – it was my favourite.

And of course the last big linkage in Last of the Timelord re Capn Jacks origins….

Very cool series. Can’t believe it is over already. When does series 4 start??? HOW LONG????

Blink is the first episode for a long time that scared my Son, he actually backed away from the TV and climbed on the sofa to cuddle up.

I thought it was marvellous.

“Nice touches in John Smith’s journal. (Some people freeze-framed it and noted pictures of past Doctors and numerous other series references.)”

Did anyone actually need to do this, I thought the references were good, but very noticeable.

On the whole I really enjoyed this series and consider it the best yet, with the exception of Daleks in Manhatten/Evolution of the Daleks. Watchable, but by far the weakest point.

I really can’t understand why everyone considers Blink to be so frightening. Yes it was an excellent episode but scary it was not. Even my 5 year old son would agree with me (the 7 year old? Don’t even ask lol).

Torchwood? Loved it, although it was far from without fault. Random Shoes is growing on me slightly, although it put me off initially for being a repeat of Love and Monsters which I hated and another annoying point in that was all the guy’s family spoke with Welsh accents and he didn’t. I would have LOVED to hear someone talking that much through an episode in a Welsh accent as it’s so lovely to listen to. Countrycide remains my favorite of the series, but as for Cyberwoman, well, if you take it with a look to humor it’s tolerable (just) but definitely the lowest point and the ending to Small Worlds spoiled an otherwise good episode. For what it’s worth, I do let my kids watch it (after I check the content first) and they’ve seen all except Day One and Combat. Those two are banned for very good reasons.

I’m just hoping that the Sarah Jane Adventures is better than K-9 and Company :-)

Hubby found.. the very first ep’s with Sarah Jane and Jon P’s Doc the other day. It was fun to think back to my early memories and watch them again now as an adult.

Almost perfect, but the Captain Jack / Face of Boag connection was a bit silly. But, if we didn’t like silly, we wouldn’t like Dr Who, would we?

Boe, not Boag! Boag is a beer!

I thought all the episodes were brilliant except for the Shakespeare code. It was too formulaic and dull, besides the alien menace was too ordinary.
Utopia was by far the best.