I’ve got today off, to enjoy the sunshine, enjoy the first day proper of the school holidays, and generally enjoy not having to do any work (touch wood). 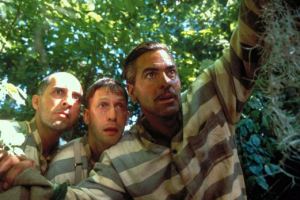 I’ve seen O Brother Where Art Thou twice in the last month, and I still like it a lot. Recently the kids watched it for the first time**, and while I had to explain some of the concepts and plot, they seemed to enjoy it.

Here’s some of the reasons it’s one of my favourite movies:

And of course Everett’s more lengthy and involved dialogue.

That scene early on with the steam train going across screen sounds and looks fantastic on a decent sized TV with good speakers. (The UK SE DVD release I have has 5.1 sound; it’ll be near the top of my list for playing when I eventually invest in surround sound.)

Indeed, there’s some glorious photography and sound right through the movie… and of course the music.

The music captures the age it’s set in. And a lot of it is genuine, from the period, thanks to geniuses like John and Alan Lomax, who wandered the country making recordings of songs that otherwise would have been lost to history.

Pappy O’Daniel with the wise words that campaigners and advocates should bear in mind when sorting out their priorities: “We ain’t one-at-a-timing here! We’re mass communicating!”

The look on Everett’s face Where the boys start singing Man Of Constant Sorrow to a delighted audience, completely unaware it’s become a big hit.

All the Ullyses allusions. The Sirens, the Cyclops, the return home — even the old man disguise. And there’s plenty more.

“Oh George, not the livestock!”

I’m sure there’s plenty more reasons that will come to me the next time I watch it.

**It’s rated M in Australia, but 12 in the UK and PG in the USA… I don’t normally show my kids M-rated material yet, but I’ll make an exception in specific cases. Compared to many M-rated films, this is pretty mild.

LOVE this movie… for much the same reasons, particularly the music. A definite inclusion in my top 5 movies of all time.

Can I admit something very embarassing? I’ve never yet seen this movie *hangs head in shame* I know…. I’m missing a good movie. I’ll watch it, promise! :D

So what’s stopping you?

Well, just haven’t thought to rent it, honestly… and Tim is usually up @ 5:30 am weekdays for work, so it’s an early bedtime usually. And…. not really the movie for kids to watch. So we tend to honestly avoid adult films, and have been watching a great deal of family movies the last few years. There you go, that’s the reason :)